From Infogalactic: the planetary knowledge core
Jump to: navigation, search
Not to be confused with seaweed, plant-like algae. 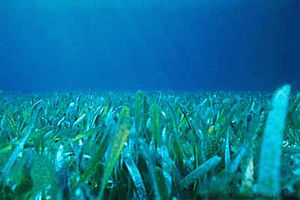 Seagrasses are flowering plants (Division Angiospermae) belonging to four plant families (Posidoniaceae, Zosteraceae, Hydrocharitaceae, or Cymodoceaceae), all in the order Alismatales (in the class of monocotyledons), which grow in marine, fully saline environments. There are 12 genera with some 58 species known. 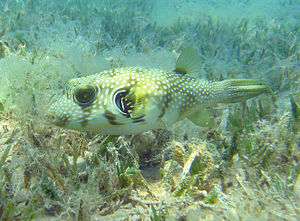 These unusual marine flowering plants are called seagrasses because in many species the leaves are long and narrow, grow by rhizome extension, and often grow in large "meadows", which look like grassland: in other words, many of the species of seagrasses superficially resemble terrestrial grasses of the family Poaceae.

Like all autotrophic plants, seagrasses photosynthesize so are limited to growing in the submerged photic zone, and most occur in shallow and sheltered coastal waters anchored in sand or mud bottoms. Most species undergo submarine pollination and complete their entire life cycle underwater. There are about sixty species worldwide.

Seagrasses form extensive beds or meadows, which can be either monospecific (made up of a single species) or in mixed beds where more than one species coexist. In temperate areas, usually one or a few species dominate (like the eelgrass Zostera marina in the North Atlantic), whereas tropical beds usually are more diverse, with up to thirteen species recorded in the Philippines.

Seagrass beds are highly diverse and productive ecosystems, and can harbor hundreds of associated species from all phyla, for example juvenile and adult fish, epiphytic and free-living macroalgae and microalgae, mollusks, bristle worms, and nematodes. Few species were originally considered to feed directly on seagrass leaves (partly because of their low nutritional content), but scientific reviews and improved working methods have shown that seagrass herbivory is a highly important link in the food chain, with hundreds of species feeding on seagrasses worldwide, including green turtles, dugongs, manatees, fish, geese, swans, sea urchins and crabs.

Some fish species that visit/feed on the seagrass raise their young in adjacent mangroves or coral reefs. Also, seagrass traps sediment and slows water movement, causing suspended sediment to fall out. The trapping of sediment benefits coral by reducing sediment loads in the water.[1] 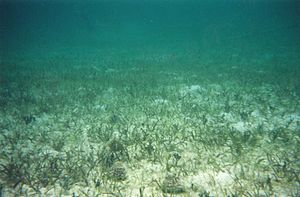 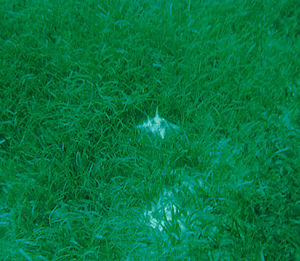 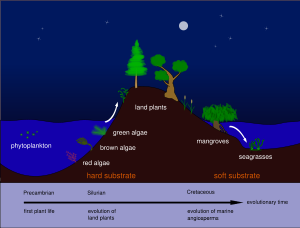 Seagrasses are sometimes labeled ecosystem engineers, because they partly create their own habitat: the leaves slow down water-currents increasing sedimentation, and the seagrass roots and rhizomes stabilize the seabed.

Their importance for associated species is mainly due to provision of shelter (through their three-dimensional structure in the water column), and for their extraordinarily high rate of primary production. As a result, seagrasses provide coastal zones with a number of ecosystem goods and ecosystem services, for instance habitat for commercially and recreationally valued fishery species,[3] fishing grounds, wave protection, oxygen production and protection against coastal erosion. Seagrass meadows account for more than 10% of the ocean’s total carbon storage.[4] Per hectare, it holds twice as much carbon dioxide as rain forests. Yearly, seagrasses sequester about 27.4 million tons of CO2 (Reference Needed). Due to global warming, some seagrasses will go extinct – Posidonia oceanica is expected to go extinct, or nearly so, by 2050. This would result in CO2 release.[5][6]

Historically, seagrasses were collected as fertilizer for sandy soil. This was an important use in the Ria de Aveiro, Portugal, where the plants collected were known as moliço.

In the early 20th century, in France and, to a lesser extent, the Channel Islands, dried seagrasses were used as a mattress (paillasse) filling - such mattresses were in high demand by French forces during World War I. It was also used for bandages and other purposes.

Currently, seagrass has been used in furniture, and woven like rattan.

Seagrasses are in global decline, with some 30,000 km2 (12,000 sq mi) lost during recent decades. The main cause is human disturbance, most notably eutrophication, mechanical destruction of habitat, and overfishing. Excessive input of nutrients (nitrogen, phosphorus) is directly toxic to seagrasses, but most importantly, it stimulates the growth of epiphytic and free-floating macro- and micro-algae. This weakens the sunlight, reducing the photosynthesis that nourishes the seagrass and the primary production results.

Decaying seagrass leaves and algae fuels increasing algal blooms, resulting in a positive feedback. This can cause a complete regime shift from seagrass to algal dominance. Accumulating evidence also suggests that overfishing of top predators (large predatory fish) could indirectly increase algal growth by reducing grazing control performed by mesograzers, such as crustaceans and gastropods, through a trophic cascade.

Macro algal blooms cause the decline and eradication of seagrasses throughout areas where nutrient loading or other sources of stimulated algal growth exist. Known as nuisance species, macroalgae grow in filamentous and sheet-like forms and form thick unattached mats over the seagrasse, occurring as epiphytes on seagrass leaves. Eutrophication leads to the forming of a bloom, causing the attenuation of light in the water column, which eventually leads to anoxic conditions for the seagrass and organisms living in/around the plant(s). In addition to the direct blockage of light to the plant, benthic macroalgae have low carbon/nitrogen content, causing their decomposition to stimulate bacterial activity, leading to sediment resuspension, an increase in water turbidity, and the further attenuation of light.[7][8]

When humans drive motor boats over shallow seagrass areas, sometimes the propeller blade can tear out or cut the seagrass.

The most-used methods to protect and restore seagrass meadows include nutrient and pollution reductions, protection using marine protected areas, and restoration using seagrass transplantation. There is also increasing recognition of the need to increase the resilience of seagrass to the impacts of future environmental change.[9]