Coat of arms of Puerto Rico

From Infogalactic: the planetary knowledge core
(Redirected from Seal of Puerto Rico)
Jump to: navigation, search

The coat of arms of Puerto Rico was first granted by the Spanish Crown in 1511, making it the oldest heraldic achievement still currently in use in the Americas.[1] The territory was ceded by Spain to the United States in accordance to the peace treaty that ended the Spanish–American War in 1899, after which two interim arms were adopted briefly. A law was passed in 1905 that re-established the historical armorial bearings as the arms of the territory; after numerous investigations and amendments, the current version was adopted in 1976. 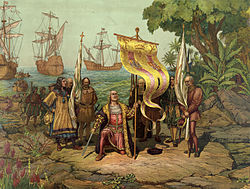 Christopher Columbus arriving in the New World carrying a banner with the initials of Ferdinand II and Isabella I.

All of the states and territories of the United States employ a seal to authenticate and ratify documents and accordingly a seal of Puerto Rico exists, but the traditional coat of arms is used as the main emblem of the commonwealth. The seal has most of the elements of the coat of arms, but the religious elements have been stripped away. In the seal, the lamb, which no longer has a halo, carries a white banner instead of one with a red cross. The lamb's staff does not have the cross mounted on top. The book the lamb sits on does not have the seals of the Book of Revelation. The first Governors used the seal as their emblem but in recent years the usage of the seal has been limited to being the official emblem used to represent Puerto Rico on its legal documents when they are sealed.

Seal of the Governor

Seals of the government of Puerto Rico