From Infogalactic: the planetary knowledge core
Jump to: navigation, search
This article is about the military rank. For civil and generic usage, see Sailor. For other uses, see Seaman (disambiguation). 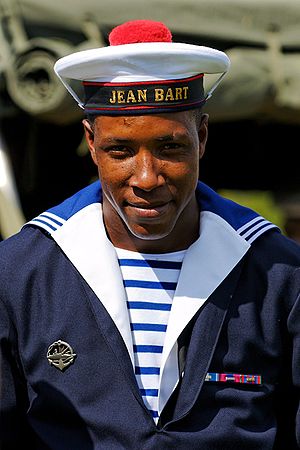 In the United States, it means the lowest three enlisted rates of the U.S. Navy and U.S. Coast Guard, followed by the higher petty officer ranks. The equivalent of the seaman is the matelot[1] in French-speaking countries, and Matrose in German-speaking countries.

The term "seaman" is also a general-purpose for a man or a woman who works anywhere on board a modern ship, including in the engine spaces, which is the very opposite of sailing. This is untrue in the US Navy where a sailor might be a seaman but not all US Navy sailors are a 'Seaman' as they might be an Airman, Fireman, Contructionman, or Hospital Corpsman. Furthermore, "seaman" is a short form for the status of an "able-bodied seaman," either in the navies or in the merchant marines. An able-bodied seaman is one who is fully trained and qualified to work on the decks and superstructure of modern ships, even during foul weather,[2] whereas less-qualified sailors are restricted to remaining within the ship during times of foul weather — lest they be swept overboard by the stormy seas or by the high winds.

There are 4 grades of seaman/matelot in the Royal Canadian Navy:

The rank of master seaman is unique because it was created only for the Canadian Navy. It does not follow the British tradition of other Canadian ranks. It corresponds to the rank of master corporal/caporal-chef.

Shoulder board of a German seaman (matrose)

The German rank of "seaman" (German: matrose) is the lowest enlisted rank of the German Navy.[3] It is equivalent to OR1 in NATO and is a grade A3 in the pay rules of the Federal Ministry of Defence.

There is one grade of seaman in the Hellenic Navy.

The Soviet Union and Russia

Shoulder board of a Russian seaman (matros)

Much Russian military vocabulary was imported, along with military advisers, from Germany in the 16th and 17th centuries. The Russian word for "seaman" or "sailor" (Russian: матрос; matros) was borrowed from the German "matrose". In Imperial Russia the most junior naval rank was "seaman 2nd class" (матрос 2-й статьи; matros vtoroi stati). The 1917 Revolution led to the term "Red Fleet man" (краснофлотец; krasnoflotets) until 1943, when the Soviet Navy reintroduced the term "seaman" (матрос; matros), along with badges of rank. The Russian federation inherited the term in 1991, as did several other former Soviet republics, including Ukraine, Azerbaijan and Belarus, with Bulgaria using the same word and the same Cyrillic orthography. Estonia (Estonian: mаtrus) and Lithuania (Latvian: mаtrozis) use closely related loanwords.

In the Royal Navy the rate is split into two divisions: AB1 and AB2. The AB2 rating is used for those who have not yet completed their professional taskbooks. The rate of ordinary seaman has been discontinued. 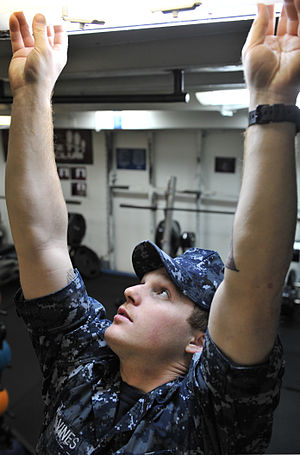 A US Navy seaman at work aboard USS Nimitz

Seaman is the third enlisted rank from the bottom in the U.S. Navy and U.S. Coast Guard, ranking above seaman apprentice and below petty officer third class. This naval rank was formerly called "seaman first class". The rank is also used in United States Naval Sea Cadet Corps, a naval-themed uniformed youth program under the sponsorship of the Navy League of the United States.

The actual title for an E-3 in the U.S. Navy varies based on the subset of the Navy or Coast Guard, also known as a group rate, to which the member will ultimately be assigned. Likewise, the color of his/her group rate mark also depends on that subset of the Navy or Coast Guard in which they're serving and which technical rating they will eventually pursue.

No such stripes for E-1, E-2 or E-3 are authorized to be worn on working uniforms, e.g., navy work uniform, USCG operational duty uniform, coveralls, utility wear, flight suits, hospital and clinic garb, diving suits, etc. However, sailors with the rank of E-2 or E-3 are permitted to wear silver-anodized collar devices on their service uniforms.

Some sailors and coast guardmen receive a rating following completion of a military technical training course for that particular rating known as an "A" school. Other sailors and coast guardsmen who have completed the requirements to be assigned a rating and have been accepted by the Navy Personnel Command/Bureau of Naval Personnel (USN) or the Coast Guard Personnel Service Center Command (USCG) as holding that rating (a process called "striking") are called "designated strikers", and are called by their full rate and rating in formal communications (i.e., machinist's mate fireman (MMFN), as opposed to simply fireman (FN)), though the rating is often left off in informal communications. Those who have not officially been assigned to a rating are officially referred to as "undesignated" or "non-rates." In order to advance to the rate of petty officer third class, a seaman would have to submit a request every month for a rating. Once selected for a particular rating of their choice they become eligible for advancement in that community.