Seashore wildlife habitats exist from the Tropics to the Arctic and Antarctic. Seashores and beaches provide varied habitats in different parts of the world, and even within the same beach. Phytoplankton is at the bottom of some food chains, while zooplankton and other organisms eat phytoplankton. Kelp is also autotrophic and at the bottom of many food chains. Coastal areas are stressed through rapid changes, for example due to tides. 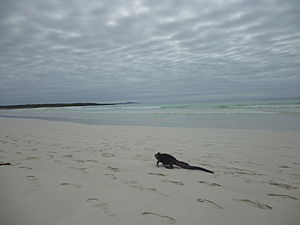 A marine iguana, Amblyrhynchus cristatus, on the beach at Tortuga Bay on Santa Cruz Island, Galapagos

The coasts round Britain and the sea nearby is of international significance. Animal life varies from large whales, dolphins and porpoises, grey seals and common seals, through to microscopic animals. There are more than 200 species of fish, ranging from small fish like blennies through to basking sharks that are the second largest shark in the world.

Habitats include areas of landslips, beaches with sand, shingle and rock, cliffs, coastal lagoons, isolated sea stacks and islands, muddy estuaries, salt marshes, submaritime zones (i.e. land influenced by sea spray) and the sea itself. British coasts are affected by strong winds and in some areas large waves. British tidal ranges are large compared to some other parts of the world. Sheltered shores support different life from exposed shores. [1] [2]

Non-flowering plants range from microscopic plants through to seaweed or kelp up to 5 meters in height. Many animals feed on kelp and kelp provides sheltered habitats for yet others. Sea grass is the only type of flowering plant that grows in British seas, but it nonetheless forms vast beds.

Invertebrates in coastal Britain are very diverse and include brittle stars, hermit crabs, mussels, prawns, sponges, sea anemones and sea squirts. Efforts are made to conserve rare plants and animals in Nature reserves.

Cliffs, islands and sea stacks are a habitat for breeding sea birds such as guillemots, kittiwakes and razor bills, as well as rock doves which can live inland as well. Peregrine falcons hunt the doves. Estuaries provide a habitat for waders and ducks, especially in winter.

Suggestions for protecting the habitat are found in the "seashore code":

Always return rockpool creatures to the place where you found them.

If you move rocks, put them back the same way up in their original place. It takes years for seaweed to grow, so don't remove it from its anchorage. Always make sure a shell is empty if you want to take it away.

Don't go rockpooling in windy or rough weather, watch the tide, wear suitable shoes, and tell someone where you're going.