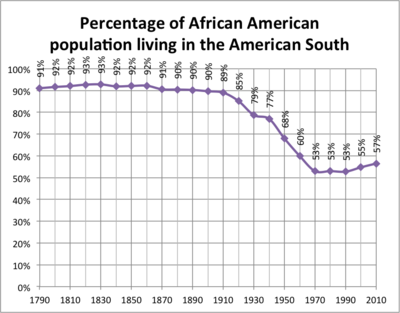 Graph showing the percentage of the African American population living in the American South, 1790-2010. 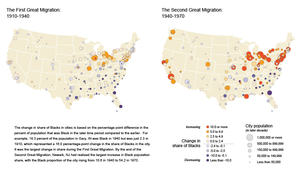 First and Second Great Migrations shown through changes in African American share of population in major US cities, 1910–1940 and 1940–1970

In the context of the 20th-century history of the United States, the Second Great Migration was the migration of more than five million African Americans from the South to the North, Midwest and West. It took place from 1941, through World War II, and lasted until 1970.[1] It was much larger and of a different character than the first Great Migration (1910–1940).

In the Second Great Migration, more than five million African Americans moved to cities in states in the North, Midwest and West, including California, where Los Angeles, Oakland, Richmond, California, and Long Beach offered skilled jobs in the defense industry. Most of these migrants were already urban laborers who came from the cities of the South. In addition, African Americans were still treated with discrimination in parts of the country, and many sought to escape this.[1]

Compared to the more rural migrants of the period 1910-1930, many African Americans in the South were already living in urban areas and had urban job skills before they relocated. They moved to take jobs in the burgeoning industrial cities and especially the jobs in the defense industry during World War II (WWII).[citation needed] Workers who were limited to segregated, low-skilled jobs in some cities were able to get highly skilled, well-paid jobs at California shipyards.[1]

By the end of the Second Great Migration, African Americans had become a highly urbanized population. More than 80 percent lived in cities, a greater proportion than among the rest of American society. Fifty-three percent remained in the Southern United States, while 40 percent lived in the Northeast and North Central states and 7 percent in the West.[1]

While African Americans were often relegated to support roles during WWII, often these roles could be exceedingly hazardous. A munitions explosion at Port Chicago, California, across the bay from San Francisco, claimed the lives of over 200 African Americans in 1944. When some of the workers refused to resume work until conditions were made less hazardous, up to 50 were tried for mutiny and imprisoned.[2]

African American southerners were motivated to move based on economic concerns. The economic deprivation suffered by southern African Americans prior to the great migration has been well documented. Plantation agriculture such as sharecropping limited African Americans to gain and work up the “agricultural ladder”.[3] The agricultural ladder was a system which workers status determined their position on work expresses how skilled and valuable they are. Because of segregation African American men were placed in unskilled jobs and women were placed in domestic services. These conditions that had little to no change from the early decades of the twentieth century which was a sign and powerful incentive for African American southerners to leave and go look for opportunity elsewhere. African Americans strived to find new opportunities such as finding better ways to earn a living to support their families. Moving to the north was a way to improve their economic fortunes. World War I and new immigration policies forced northern employers to start considering southern African Americans and whites as a cheap labor force to replace the costly European workers. Other factors such as education opportunities, political disenfranchisement, racial violence, were all social forces that really drove migration. Economic and noneconomic forces were key towards migration. The great migration is a complex process driven by a large and diverse set of forces.[3]

Other effects of the Second Great Migration:

The lack of opportunity in the South prompted many African Americans to migrate to Western cities in search of jobs in the booming munitions industry. Once they arrived, they were met with a variety of factors that separated emerging migrant communities from white ones. This urban spatial segregation led to the creation of racially homogenous areas in cities that saw large amounts of African American immigration, such as the San Francisco Bay and Los Angeles. It is estimated that less than 1% of Los Angeles's 461,000 black residents lived in communities without a black majority in 1960, resulting in de facto segregation.[4] In order to exploit the poor financial situation many migrants were in, areas of low income housing were established in places city planners wanted them to live. For example, South Los Angeles was established as a designated area for African Americans as early as the 1930s. Working class blacks were attracted by the low price of housing intentionally placed in order to encourage the concentration of blacks and Latinos away from whites. Freeways were often built with the isolation of racial communities in mind. They served to reinforce lines of segregation and further contributed to the isolation of racially homogeneous communities in racially diverse cities. The fear of racially motivated violence and discrimination also served to isolate communities of minorities as they sought collective security and nondiscriminatory treatment close to home. The limited amount of housing, combined with the upsurge of immigrants during the Second Great Migration lead to severe overcrowding and housing shortages that contributed to increasingly low property values.

As property values within these communities plummeted, the middle class, mostly white residents of target areas evacuated en masse. This is a phenomenon known as white flight. The introduction of non-white residents into a traditionally white area, in this case, inner city neighborhoods, caused the rapid evacuation of whites, usually to the suburbs. In this way, the common social trope of white suburbia and the racially diverse inner city came to be. It is currently estimated that over 70% of blacks operating in a given metropolitan area live in the city center. Comparatively, only 30% of whites operating within that same city live in the inner city.[5] White flight was driven in part by the process of blockbusting. White property owners, fearful of minority groups, sold their homes to real estate agents at a low price, often due to the tactics of the real estate companies themselves. Agents would then encourage that the vacant properties be bought by black families seeking respite from the overcrowded neighborhoods in which they were sequestered. When one black family moved in, the white neighbors would immediately sell their homes to the waiting real estate companies, who would in turn sell to more black people at a significant markup.

Another obstacle facing migrating blacks were the discriminatory housing laws that were put in place to counteract progressive legislation in California following World War Two. The 1963 Rumford Fair Housing Act that outlawed discrimination in housing was effectively nullified by California Proposition 14 in 1964. This legislation, sponsored by the California Real Estate Association and conservative state institutions, affirmed the property owner’s right to refuse to sell, rent or lease their property based solely on race. The federal government immediately cut funding to California housing and both the California and United States Supreme Court declared Prop 14 unconstitutional. It was officially repealed by California Proposition 7 in 1974, but while it was in practice it contributed to the segregation of black migrants and is cited as a direct cause of the unrest in Watts in 1965.

The effect of racially homogeneous communities composed largely of migrant blacks that formed because of spatial segregation in destination cities was that they were largely influenced by the Southern culture they brought with them. The food, music and even the discriminatory white police presence in these neighborhoods were all imported to a certain extent from the collective experiences of the highly concentrated African American migrants.[6]