From Infogalactic: the planetary knowledge core
(Redirected from Secretariat of the Pacific Community)
Jump to: navigation, search 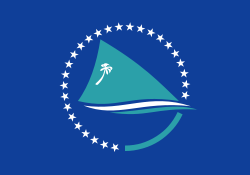 Flag of the Pacific Community

The Pacific Community (previously the Secretariat of the Pacific Community (SPC) until November 2015) is a regional intergovernmental organisation whose membership includes both nations and territories in the Pacific Ocean and their metropolitan powers. It aims to "develop the technical, professional, scientific, research, planning and management capability of Pacific Island people and directly provide information and advice, to enable them to make informed decisions about their future development and well-being."[1] The headquarters of the organisation is in Nouméa, New Caledonia, and it has a large office in Suva, Fiji. 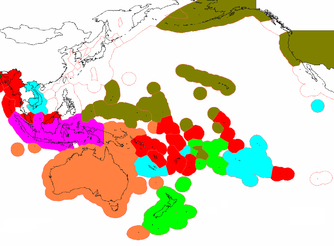 SPC was founded in 1947 as the South Pacific Commission by six developed countries with an interest in the region:

For reasons either of reduced development interest in the Pacific Islands region or a desire to concentrate assistance in other areas of greater poverty, two founding members have since withdrawn from the SPC: the Netherlands in 1962 and the United Kingdom in 1994 and – after rejoining in 1998 – again in 2004.

SPC's founding charter is the Canberra Agreement.[2][3] In the aftermath of World War II, the six colonial powers which created the SPC, arguably intended it to secure Western political and military interests in the postwar Pacific.[4][5][6]

From the start, SPC's role was constrained, and the invitation from Australia and New Zealand to the US, France, Netherlands and the UK to participate in a South Seas Commission Conference in 1947 included the statement that "the [South Pacific] Commission to be set up should not be empowered to deal in any way with political matters or questions of defense or security"[7] This constraint on discussion (particularly the constraint on discussing nuclear weapons testing in the region) led, eventually, to the creation of the South Pacific Forum (now Pacific Islands Forum), which not only excluded the more distant "metropolitan" powers of France, UK and USA, but also their Pacific Island territories.

Today, the SPC's role has expanded in service to its community and it works closely with donor and technical assistance organisations such as AusAID, FAO, the United Nations, and CTA. The SPC work-area includes the following Pacific island countries and territories, which since 1983 have been full members:

These were all territories (or, in the case of Tonga, a protected state) of the original founder members of SPC, but most are now independent. Dutch New Guinea, formerly represented in the SPC by the Netherlands, was transferred to the United Nations in 1962 and to Indonesia in 1969. Thus, the Netherlands is no longer represented in the SPC since the end of 1962. The United Kingdom also withdrew from the organisation on 1 January 1995.

SPC today is the oldest and largest organization in the Council of Regional Organisations in the Pacific (CROP), a consultative process that is headed at the political level by the Pacific Islands Forum Secretariat. Since the hand-over of co-ordination of regional political issues from the SPC Conference to the South Pacific Forum in the 1970s, SPC has concentrated on providing technical, advisory, statistical and information support to its member governments and administrations, particularly in areas where small island states lack the wherewithal to maintain purely national cadres of expertise, or in areas where regional co-operation or interaction is necessary.

The Land Resources Division, based in Suva, comprises two programmes – sustainable management of forest and agriculture systems, and biosecurity and trade facilitation. It operates the Centre for Pacific Crops and Trees, which is a plant propagation vault in Fiji. The Secretariat of the Pacific Community's Land Resources Division provides advice, expertise, technical support and training to members on all aspects of agriculture and forestry, including:

This division has seven sections organised into two programmes which provide services to member countries and territories.[8] In the case of the Oceanic Fisheries Programme these scientific and statistical services complement the highly-migratory fish stock management and MCS services provided by other western Pacific regional fisheries bodies, including the Forum Fisheries Agency, the Western and Central Pacific Fisheries Commission, the Parties to the Nauru Agreement and Te Vaka Moana.[9] The Coastal Fisheries Programme however is the only Pacific Islands regional fisheries body providing monitoring, science, management and development services in reef or nearshore fisheries and aquaculture.

This division covers a broad range of areas and includes the:

The Operations and Management Directorate (OMD)