The seventh European Parliament was elected in the 2009 elections and lasted until the 2014 elections. 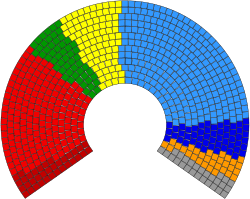 See membership below for details of size

Members in groups by country

Further information: List of members of the European Parliament 2009–2014

After the 2009 election, the members formed seven groups with around 26 independent members, mainly from the far right which failed to unify into a political group. With the Treaty of Lisbon not in force in time for the elections, the national distribution followed the rules of the Treaty of Nice which necessitated a reduction to 736 members. Extra members will join the chamber if Lisbon comes into force.[4]

The seventh parliament ended with a total of 766 MEPs (including Croatia) and was slimmed down to 751 at the start of the eight parliament.

For the seventh parliament, the number of women increased from 31% to 35% (the highest to date, from 16% in 1979) with increases in most countries. The largest percentage was in Sweden, with 56% of MEPs women, followed by Estonia with 50%. The lowest was Malta with no women members at all, followed by the Czech Republic with 18%, down from 21%.[5]

From inauguration, the youngest member was Emilie Turunen of Denmark (born in 1984 making her 25) and the oldest member was Ciriaco de Mita of Italy (born 1928 making him 81).[6] Usually the oldest member would preside over the chamber for the election of the Parliament's President. However, with concern that the far-right Jean-Marie Le Pen would be the oldest member (rather than De Mita) the rules were changed to give this role to the outgoing President.[7]