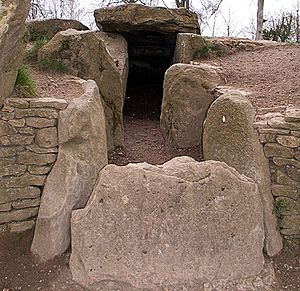 A Severn-Cotswold tomb (or Cotswold-Severn tomb) is a type of megalithic chamber tomb built by Neolithic people in Wales and South West England around 3500 BC.

Severn-Cotswold tombs consist of long, precisely built trapezoidal earth mounds covering burial chambers. Because of this they are a type of chambered long barrow. In some examples, pairs of smaller burial chambers lead off from either side of the central rectangular burial chamber, itself connected to an ante-room. In others the entrance is a false entrance, with the burial chambers accessed laterally from directly outside. A third group have merely a single large chamber.

Tombs of this type are concentrated in the Cotswolds but extend as far as Gower and Avebury with some isolated examples in North Wales. Tombs of all three types are generally evenly distributed and it has been theorised that the design evolved over time. Severn-Cotswold tombs share certain features with the transepted gallery graves of the Loire and may have been inspired by these, with the lateral chambers and other differences being local variations.

In the 1960s and 1970s Dr John X. W. P. Corcoran and others argued that the group in fact consisted of three contemporary types,[1] and later excavations have supported this.

Wayland's Smithy is on the Berkshire Downs and was excavated between 1962 and 1963, at which point it became obvious there were two successive barrows on the site.[3]