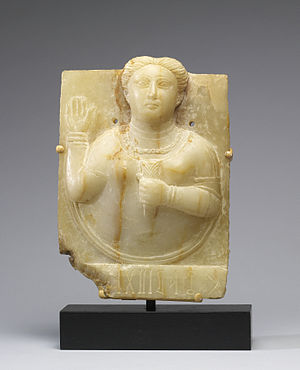 A Sabaean priestess, who intercedes with the sun goddess on behalf of the donor. Probably 1st century AD

, Hebrew: שבא, Šəḇā) was a kingdom mentioned in the Hebrew scriptures (Old Testament) and the Qur'an. Sheba features in Ethiopian, Hebrew and Qur'anic traditions. Among other things it was the home of the biblical "Queen of Sheba" (named Makeda in Ethiopian tradition and Bilqīs in Arabic tradition).

Modern archaeological studies support the view that the biblical kingdom of Sheba was the ancient Semitic civilization of Saba in Southern Arabia,[dubious – discuss][1][2][3][4][5] in Yemen, between 1200 BCE until 275 CE with its capital Marib.[6][7] The Kingdom fell after a long but sporadic civil war between several Yemenite dynasties claiming kingship,[8][9] resulting in the rise of the late Himyarite Kingdom.

Similar description in the Hebrew Bible is found in Strabo's writings and Assyrian annals about the Sabaeans[10] Their civilization stretched as far as Aqaba with small colonies to protect the trade routes, these colonies included Yathrib and the central Arabian kingdom of Kindah[11][12] and northern Ethiopia where archaeologists found an ancient temple dedicated to the Sabaean chief god El-Maqah[13] The study of the history and culture of this kingdom is still patchy, especially the chronology of historical events and kings.[14]

The two names Sheba (spelled in Hebrew with shin) and Seba (spelled with samekh) are mentioned several times in the Bible with different genealogy. For instance, in the Table of Nations[15] Seba, along with Dedan, is listed as a descendant of Noah's son Ham (as sons of Raamah, son of Cush). Later on in Genesis,[16] Sheba and Dedan are listed as names of sons of Jokshan, son of Abraham Another Sheba is listed in the Table of Nations[17] as a son of Joktan. Another descendant of Noah's son Shem.

There are several possible reasons for this confusion. One theory is that the Sabaean established many colonies to control the trade routes and the variety of their caravan stations confused the ancient Israelites, as their ethnology was based on geographical and political grounds and not necessarily racial.[18] Another theory suggests that the Sabaean hailed from Southern Levant and established their kingdom on the ruins of the Minaean Kingdom.[19] It remains a theory however and cannot be confirmed.

The most famous claim to fame for the Biblical land of Sheba was the story[20] of the Queen of Sheba, who travelled to Jerusalem to question King Solomon, arriving in a large caravan with precious stones, spices and gold. The apocryphal Christian Arabic text Kitāb al-Magall ("Book of the Rolls", Kitāb al-Magāll.[21] considered part of Clementine literature) and the Syriac Cave of Treasures mention a tradition that after being founded by the children of Saba (son of Joktan), there was a succession of sixty female rulers up until the time of Solomon.

The Jewish-Roman historian Josephus describes a place called Saba as a walled, royal city of Ethiopia, which Cambyses afterwards named Meroe. He says "it was both encompassed by the Nile quite round, and the other rivers, Astapus and Astaboras" offering protection from both foreign armies and river floods. According to Josephus it was the conquering of Saba that brought great fame to a young Egyptian Prince, simultaneously exposing his personal background as a slave child named Moses.[22]

In the Qur'an, Sheba is mentioned by name at 27:22 in a section that speaks of the visit of the Queen of Sheba to King Solomon Qur'an 27:20-44.[23][24] The Qur'an mentions this ancient community along with other communities that were destroyed by God.[25] Muslim scholars, including Ibn Kathir, related that the People of Sheba were Arabs from South Arabia.[26]

In Ethiopian Orthodox tradition, the Sheba (Saba in Ethiopic) who was Joktan's son is considered the primary ancestor of the original Semitic component in their ethnogenesis, while Sabtah and Sabtechah, sons of Cush, are considered the ancestors of the Cushitic element. Traditional Yemenite genealogies also mention Saba son of Qahtan (Joktan), however they claim Sabaean descent not from him, but from yet another Saba not mentioned in scripture, who was said to be a grandson of Yarab and a great-grandson of Qahtan.

In the medieval Ethiopian cultural work called the Kebra Nagast, Sheba was located in Ethiopia.[27] Some scholars therefore point to a region in the northern Tigray and Eritrea which was once called Saba (later called Meroe), as a possible link with the biblical Sheba.[28] Other scholars link Sheba with Shewa (also written as Shoa, the province where modern Addis Ababa is located) in Ethiopia.[29]

The location of the kingdom mentioned in the Bible was long disputed.[30] The consensus of archaeologists is that the kingdom was located in southern Arabia.[31]

However, owing to the connection with the Queen of Sheba, the location has become closely linked with national prestige, and various royal houses claimed descent from the Queen of Sheba and Solomon. According to the medieval Ethiopian work Kebra Nagast, Sheba was located in Ethiopia. Ruins in many other countries, including Sudan, Egypt, Ethiopia and Iran have been credited as being Sheba, but with only minimal evidence. There has even been a suggestion of a link between the name "Sheba" and that of Zanzibar (Shan Sheba)[citation needed]; and even a massive earthen monument of the Yoruba people in Nigeria known as Sungbo's Eredo is held by tribal tradition to have been built in honour of the powerful queen Oloye Bilikis Sungbo, who is often equated with the Bilqis of Arabic legend.[32]