It is unknown when the Shia community first established itself in what is now the state of Pakistan or in South Asia. The region that is now Pakistan has been conquered and ruled mostly by Sunni empires, such as the Ghaznavids, Ghurids, Timurid, Mughals, Durrani, and others.

While Shi'a Muslims have found a refuge in Pakistan, tensions between them and Sunnis has resulted in the creation in recent years of Shi'a-specific organizations. Shias in Pakistan have also faced persecution by some Mughal Emperors which resulted in murder of Shia scholar Qazi Nurullah Shustari also known as Shaheed-e-Thaalis, which means the "Third Martyr". Many Nawabs were among the Shias who were rulers in present-day India or Pakistan.[11]

Ruqayyah bint Ali, the daughter of Ali bin Abi Talib through his wife Ummul Banin came to north western India (now Pakistan) in the seventh century. Ruqayyah bint Ali was the sister of Abbas ibn Ali and wife of Muslim ibn Aqeel. Her shrine in Lahore, Punjab, is visited by people all around and she is referred as Bibi Pak Daman. 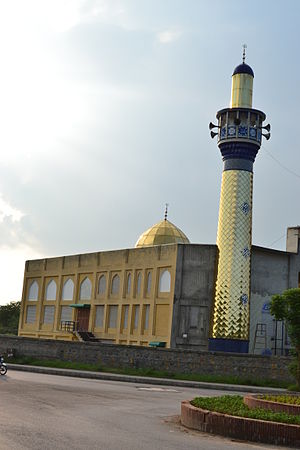 An Imambargah in Islamabad

While in past few decades, to address the legal needs and political support of the Shi'a population in Pakistan organizations like Tehrik-e-Jafaria Pakistan and Imamia Students Organisation were formed, while Sipah-e-Muhammad Pakistan, a Shia militant group, was formed to deter the militancy against Shias by Sipah-e-Sahaba Pakistan as well as Laskhar-e-Jhangvi, Deobandi militant groups. Although the Sunni and Shia Muslims usually coexist peacefully, sectarian violence is carried out sporadically by radical groups.[citation needed]

When General Zia ul-Haq, the former military ruler of Pakistan, introduced new laws to make Zakat deductions mandatory for every Muslim during the 1980s, Tehrik-e-Jafaria held a large public demonstration in Islamabad to compel the government to exempt the Shia Muslim community from this law. This protest resulted in the "Islamabad Agreement" in which the government agreed to introduce a separate syllabus for Shia students in public schools, as well as exempt the Shia community from the Zakat law, since Shia consider Zakat as a personal tax (to be paid to the needy) not collectible by the state. According to one senior Pakistani journalist who witnessed these events, Iranian leader Ayatollah Khomeini played an important role in this agreement being reached, and he sought assurances from General Zia al-Haq that Shia demands would be met. A message from Ayatollah Khomeini was also read out to the Shia protesters in Islamabad in which he called for them to keep up their spirits.[17][18]

The Pakistani Shia community is spread across the country. Pakistan hosts a number of distinct Shia communities, including the Turi and Bangash Pashtun tribes, Qizilbash, Hazaras, Dards, Baltis, Shias of Padhrar, Khojas, Bohris and others.

Divisions within the Shia sect

Although the overwhelming majority of Pakistani Shia Muslims belong to Ithna 'ashariyah school, there are significant minorities of Nizari Ismailis (Aga Khanis) and the smaller Mustaali Dawoodi Bohra and Sulaimani Bohra branches.[19]

The Shia Ithna 'ashariyah school has its own Masjids and Hussainias. Mustaali Dawoodi Bohra and Sulaimani Bohra also have their own Masjids. While the Nizari Ismailis pray in Jama'at Khanas.