Shickshinny is a borough in Luzerne County, Pennsylvania, United States. The population was 838 at the 2010 census.[1]

According to the book Indian Villages and Place Names in Pennsylvania by Dr. George P. Donehoo, the community's name likely means "Fine Stream" in a local Native American language.[2] However, according to the Shickshinny Historical Society the name Shickshinny means "Five Mountains" in a Native American language. The name comes from the nearby Shickshinny Creek at which five mountains meet (Newport, Knob, Lee, River and Rocky).[3]

Shickshinny's terrain is flat in the east, and the western part of the borough is on several hills. Shickshinny's land is mostly urban and forest.[5]

For legibility numbers have been rounded. For more information and more accurate numbers see the Census information for Shickshinny borough or American Fact Finder

The households occupied 415 of the 478 housing units in the borough, of these 60% were owned and 40% were rented. Out of the 415 households, 30% had children under the age of 18 living with them, 41% had elders over 65. About 41% of households were married, 10% had a female householder with no husband, and 42% were non-family households. 37% of householders lived alone, of which 24% were over the age of 65. The average household contained 2.3 people, while the average family contained 3 people.

A sampling of the population shows that the majority of enrolled students, 63%, were in elementary school (K-8), while 27% were in high school (9-12) and 4% in college or graduate school. The remaining were in preschool. 47% of the population, over 25 years of age, had a high school diploma while 32% did not. Out of the remaining population 21% had attended college while 9% had an associate degree or greater.

The first white settlers that came to Shickshinny were the Austin family and Crossley family who came from Connecticut. According to a Suburban News article,[11] the first permanent settler in the area was Ralph Austin. This was the period of Connecticut jurisdiction of 1782.[11] For a brief time, the Austin family fled back to Connecticut during the Battle of Wyoming. They set up a farm and an inn.[12] In 1801, Shadrick Austin bought the 256 acres (104 ha) of land.[13]

Other known settlers in the area were William Koons as early as 1850.[12] Koons settled one mile from Shickshinny where the Shickshinny Creek bridge was created. The name of the area was changed to Koonsville when the post office was established. Nathan Beach, also from Connecticut, settled in 1773. The area was named Beach Haven after him.[14]

The farm, which encompassed nearly the entire current-day borough, later came into possession of Matthias Hollenbeck under the Pennsylvania claim. The land was then inherited by his daughter, Cist Hollenback, who married Chester Butler. In 1857, upon C. Hollenbeck's death, the land was divided and sold to the proprietors of the Shickshinny company:[15] George W. Search, Lot Search, Nathan Beach Crary and Nathan Garrison. Walter Garrison bought the corner that the modern-day bank stands on. Lot Search held the position of Luzerne County treasurer in 1855 and maintained it for two years.[13]

N. Garrison and Andrew J. Eldon built the first store, located outside the old storehouse, in June 1857. But a few months after the store opened, Eldon fled to China with $3,000 of Garrison's money. It was reported that Eldon was lost in a storm at sea and drowned from the weight of gold in his pockets. The business soon closed and was bought by Nathan B. Crary.[12] A drug store opened at the same time, built by Jacob Cist, and run and managed by Stephen Bond.[15]

Nathan Garrison was the first of the proprietors to die in 1862, survived by wife and children.[12]

Many businesses began to spring up in the next decade, including a flour mill set up by G. W. and Lot Search in 1865, a foundry set up by Jesse Beadle, L. T. Hartman and Frederick Beach in 1866, and a planing mill set up by Amos Hess in 1874. Two blacksmith shops were also built and run by Miner Brown and Henry Wagner. The first newspaper in the area, The Mountain Echo, was first issued in 1873, established by C. A. Boone and M. E. Walker.[12] A post office began in the Search store, and in the 1850s was moved.[15]

Lot Search was said to believe that at one point Shickshinny was the meeting point of over 10,000 farmers to ship their goods. Shickshinny was a central hub for many reasons. A toll bridge was built in 1865 to Mocanaqua, the first of three up to 1920. An 1877 turnpike was built along the creek, heading towards Huntington Mills (modern-day Route 239).[13] The canal ran along the river and by 1865 was built to Nanticoke. This gave Shickshinny the advantages of both a railroad and a canal, which was built through in 1828.[15]

Shickshinny was the international headquarters of the Sovereign Order of St John of Jerusalem or Shickshinny Knights of Malta.

The George W. Search House was added to the National Register of Historic Places in 1983.[16]

Shickshinny is located at the lower end of the Wyoming Valley Coal Deposit, near a Red Ash vein that runs across the Susquehanna River near Mocanaqua.[15]

Humphrey Davenport was employed in 1830 to prospect Nathan Beach's land. He soon discovered coal on Rocky Mountain. For the next decade the coal was brought off the mountain by teams.[12] Finally in 1840 Beach's grandson, Dr. Darwin Crary, invented the first inclined chute to be used for the coal industry, which sent coal to the canal down the mountain.[13] Two years later, in 1842, James A. Gordon built a plane for Beach and Crary that ran for several successful years.[12]

The mines were passed over to Truman H. Clark, and then in 1865 John M. Stackhouse and Matthew Wier purchased the mines. In 1866 Cyrus Stackhouse bought out Wier's stock. Again in 1869 the mines exchanged hands and were bought by the Paxton Coal Company. Finally in 1873 the Salem Coal Company was formed. Under their guidance the mines produced 65,000 tones and employed just short of 200 men and boys.

Newport Mountain provided coal as well. It sits on the opposite side of the Susquehanna River and was found to possess superior coal. In 1857 roads and bridges were built to connect the Lackawanna and Bloomsburg Railroad, which lay on opposite sides of the river, so as to be able to mine Newport Mountain.

A company was formed by Jedediah Irish, Jess Hart and Henry. C. Crary to build the bridge. Construction was finished in 1859 by Luther and William H. Trescott. In 1865 the bridge washed away in a flood, and was to be rebuilt by the Mocanaqua Company.[12]

Neither the Shickshinny nor Mocanaqua mines are in service today.[15] 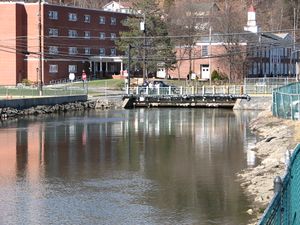 US-11 goes through Shickshinny in a south-north direction. Pennsylvania Route 239 enters Shickshinny in the northwest and in the southeast crosses the Susquehanna River towards Mocanaqua.[19]