From Infogalactic: the planetary knowledge core
Jump to: navigation, search
For other uses, see Shooting (disambiguation). 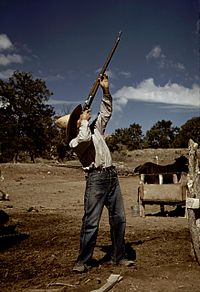 Shooting is the act or process of discharging firearms or other projectile weapons such as bows or crossbows. Even the firing of artillery, rockets, and missiles can be called shooting. A person who specializes in shooting is a marksman. Shooting can take place in a shooting range or in the field in hunting, in shooting sports, or in combat.

Marksmanship has inspired competition, and in several countries rifle clubs started to form in the 19th century.[1] Soon international shooting events evolved, including shooting at the Summer Olympics (from 1896) and World Championships (from 1897).[2] The International Shooting Sport Federation still administers Olympic and non-Olympic rifle, pistol, shotgun, and running target shooting competitions, although there is also a large number of national and international shooting sports controlled by unrelated organizations.[2]

Shooting technique differs depending on factors like the type of firearm used (from a handgun to a sniper rifle); the distance to and nature of the target; the required precision; and the available time. Breathing and position play an important role when handling a handgun or a rifle. Some shooting sports, such as IPSC shooting, make a sport of combat style shooting.[3] The prone position, kneeling position, and standing position offer different amounts of support for the shooter.

Shooting most often refers to the use of a gun, although is also used to describe the firing of a bow or crossbow.[4] A person who shoots is called a shooter. The term 'weapon' does not necessarily mean however that it is used as a weapon, but as a piece of equipment to help the user achieve the best in which they can in the sport.[5]

Shooting is used for hunting upland game birds such as grouse or pheasant, rabbits, culling, deer hunting, or other wild game animals, or shooting pest animals. Clay pigeon shooting is meant to simulate shooting live pigeons released from traps, after doing so was banned in the United Kingdom in 1921.[6] Sometimes "shooting" refers to the hunting activity itself.[4] 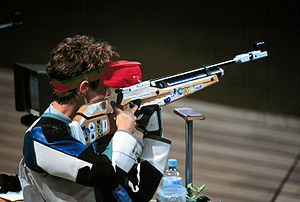 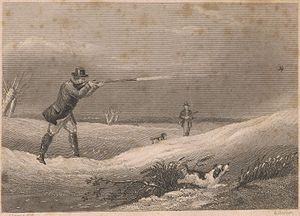 In many countries, there are restrictions on what kinds of weapon can be bought and by whom, leading to debate about how effective such measures are and the extent to which they should be applied. Attitudes in the United States are very different from those in the United Kingdom.[7]