From Infogalactic: the planetary knowledge core
Jump to: navigation, search
This article is about the town in Massachusetts, United States. For the town in Shropshire, England, see Shrewsbury.

Shrewsbury is a town in Worcester County, Massachusetts, United States. Shrewsbury is an unusual New England town in that it was neither a mill town nor a farming village. Rather, it grew as a suburb to neighboring Worcester from the start, with visitors to Lake Quinsigamond.[citation needed] The population was 35,608 according to the 2010 US Census, in nearly 12,400 households.

Incorporated in 1727, the town is governed now under the New England representative town meeting system, headed by the Town Manager and five-member elected Board of Selectmen whose duties include licensing, appointing various administrative positions, and calling a town meeting of citizens annually or whenever the need arises. 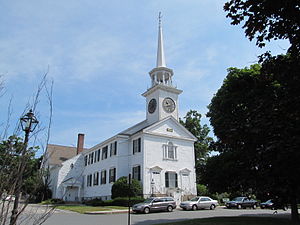 The Town of Shrewsbury, named for Shrewsbury, England, is a suburban community with an uneven and hilly terrain cut by a number of minor streams providing several small water power sites. Grants of land were made in what would eventually be the town beginning in 1664, with the 3,200-acre (13 km2) grant called Haynes Farm as the largest. Settlers came primarily from Sudbury and Marlborough, and the first permanent settler was Gersham Wheelock in 1720. As a town, Shrewsbury was first settled in 1722 and officially incorporated in 1727.

Townspeople created an agricultural economy with apple orchards, and by 1750, there were two stores and four taverns as well as several small industries in operation. The rapid fall of prices for agricultural goods, the shortage of hard currency, and the general economic depression following the Revolutionary War produced disastrous conditions for colonists. Shays' Rebellion in 1786 sought to close the courts to prevent debt collections and the foreclosure of mortgages. Shrewsbury became a staging area for the rebellion and the encampment of the more than 400 insurgents, before the march on the Worcester Court House.

A leather industry began in 1786 in Shrewsbury, and town farmers developed large cattle herds to support the manufacture of boots and shoes. This was followed by the establishment of gunsmithing operations in 1797, which produced rifles, shotguns and pistols and eventually cutlery. Luther Goddard began in 1809 by making brass clocks and then established a small watch factory employing a few skilled Swiss and English watchmakers. Lumbering created sawmills, and they in turn drew chair and cabinet makers, plow and wagon builders.

The development of streetcar routes in the 19th century spurred the growth of single-family housing in town. A summer resort population on Lake Quinsigamond became consumers of the market garden produce grown by town farmers. As Shrewsbury's industry was killed off by the lack of large waterpower sites and the tardy arrival of the railroad, its role as a suburb of Worcester grew more important. The town's population doubled from 1915 to 1940 as continued streetcar suburb growth brought more modern settlers into the community. Other modern developments included an increased number of lakeside cottages, ethnic clubs and recreational areas on the lake. The economy of modern Shrewsbury has been described as depending on agriculture, the resort industry and the providing of recreation and food for the population of Worcester.[1][2]

Shrewsbury is home to three current and one former Nationally Registered Historic Places:

Shrewsbury is a suburb of Worcester, about 45 minutes from Boston and 10 minutes to downtown Worcester. 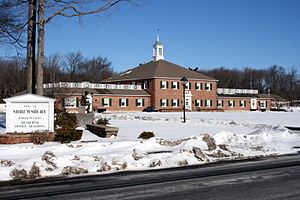 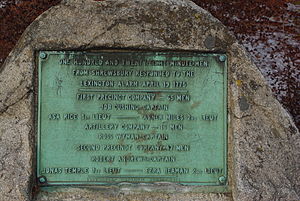 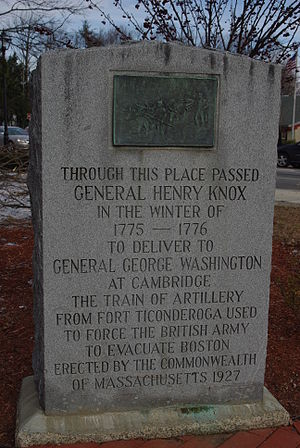 Shrewsbury is governed in the traditional New England style. Municipal elections are held on the first Tuesday in May.

Executive Branch: Five-member Board of Selectmen with three-year staggered terms, an appointed Town Manager, and other elected and appointed positions.

Library Board of Trustees

Various other boards, committees, and commissions round out the variety of services provided to residents, including water, health, fire, ambulance, police, education, recreation, etc. 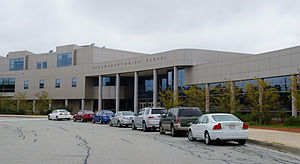 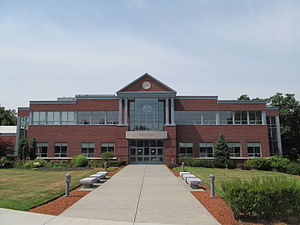 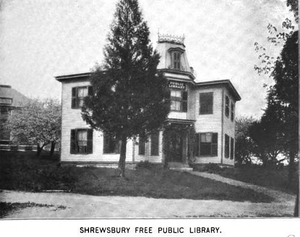 The Shrewsbury Public Library was established in 1872.[7][8] In fiscal year 2008, the town of Shrewsbury spent 1.4% ($1,164,563) of its budget on its public library — about $34 per town resident.[9] Following the 1978 library expansion project, another expansion was needed. In 2004 and 2010, officials completed research showing inadequate space, poorly maintained roofs and heating/cooling systems, lack of handicap accessibility, and a growing demand for library services. In 2010, a project was proposed that would create a new 42,000-square-foot (3,900 m2) facility for a total of approximately $19 million.[10] The main library closed to enable construction of the new building and opened in temporary accommodation at 214 Lake Street on 26 October 2014. Demolition work is almost complete and the foundations of the new library are being laid. 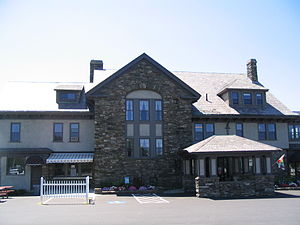 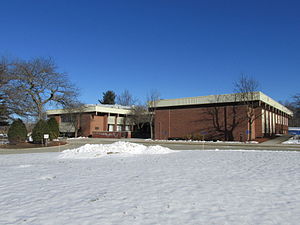 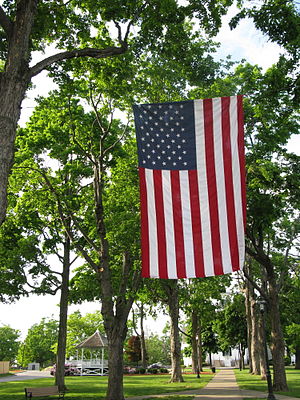 Flag flying over the town common