From Infogalactic: the planetary knowledge core
Jump to: navigation, search
For other uses, see Shrub (disambiguation). 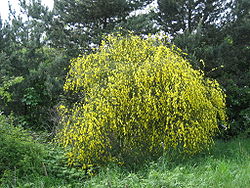 A broom shrub in flower 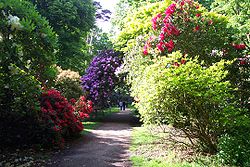 A rhododendron shrubbery in Sheringham Park

A shrub is a small to medium-sized woody plant. It is distinguished from a tree by its multiple stems and shorter height, usually under 6 m (20 ft) tall. Plants of many species may grow either into shrubs or trees, depending on their growing conditions. Small, low shrubs, generally less than 2 m (6.6 ft) tall, such as lavender, periwinkle and most small garden varieties of roses, are often termed subshrubs or bushes.

An area of cultivated shrubs in a park or a garden is known as a shrubbery. When clipped as topiary, suitable species or varieties of shrubs develop dense foliage and many small leafy branches growing close together. Many shrubs respond well to renewal pruning, in which hard cutting back to a "stool" results in long new stems known as "canes". Other shrubs respond better to selective pruning to reveal their structure and character.

Shrubs in common garden practice are generally considered broad-leaved plants, though some smaller conifers such as mountain pine and common juniper are also shrubby in structure. Species that grow into a shrubby habit may be either deciduous or evergreen.

Shrubs as a botanical structural form

In botany and ecology, a shrub is more specifically used to describe the particular physical structural or plant life-form of woody plants which are less than 8 metres (26 ft) high and usually have many stems arising at or near the base.

For example, a descriptive system widely adopted in Australia is based on structural characteristics based on life-form, plus the height and amount of foliage cover of the tallest layer or dominant species.[1]

For shrubs less than 2 metres (6.6 ft) high the following structural forms are categorized:

Those marked with * can also develop into tree form.