Hokkien, is the Minnan pronunciation for Fujian (province of China) and is generally the term used by the Chinese in South-East Asia to refer to the Banlam dialect (闽南语). Singaporean Hokkien generally holds Amoy as its own standard, and its accent is predominantly based on a mixture of Quanzhou (泉州话) and Zhangzhou speech (漳州话), but with a greater inclination towards the former.

Nevertheless, the grammar and tones of Singaporean Hokkien are still largely based on Minnan. When compared to Taiwanese's prestige accent, Singaporean Hokkien has a greater inclination towards the Quanzhou accent and is also closer to the pronunciation of Taipei and Amoy less close to that of Tainan.

From the 19th until the early half of the 20th century, there was a large influx of Chinese migrants from southern China into Singapore. This led to Chinese constituting almost 75% of Singapore's population. Out of these Chinese, many originated from the regions of Quanzhou and Zhangzhou in Fujian province. They brought Min Nan to Singapore, which was then propagated around the region of Singapore and Malaysia. As there was no formal Chinese name for Min Nan in the early 20th century, these migrants began to use their place of origin as the name of their speech, and thus called the dialect "Hokkien 福建" (which means "Fujian" province).

During the 19th century, many old-style private Chinese schools in Singapore (known as "su-sio̍k-á 私塾仔") generally used Hokkien to teach Chinese classics and Classical Chinese. But by the early 20th century, Mandarin began to replace Hokkien as the medium of instructions in Chinese schools after the founding of many Mandarin-medium schools.

The large influx of Hokkien speakers from southern Fujian province in the first half of 20th century led to the widespread use of Hokkien in Singapore. During the 1950s and 1960s, many political speeches in Singapore had to be done entirely in Hokkien in order to reach out to the Chinese community in Singapore. There was also a thriving Hokkien cultural scene such as Hokkien story-telling, Hokkien opera and media in Singapore. Nevertheless, Hokkien has never become widespread among other Chinese dialect groups in Singapore, unlike how Cantonese in Malaysia has great influence among Chinese Malaysians.

However, after 1979, the Singapore government began to push for the use of Mandarin in Singapore, spearheaded by the Speak Mandarin Campaign. Following this, the Singapore government also began to employ a more stringent censorship or ban of Hokkien media in the Singaporean Chinese media. Consequently, all Hokkien-language media in Singapore had to be dubbed in Mandarin before being allowed to stream on national TV. In addition, the 1980s also saw the replacement of Chinese-medium education with that of English, causing English to emerge as the most widely used language in Singapore. The emergence of the English language, coupled with heavy promotion of Mandarin, generally led Hokkien to decline in Singapore after 1979.

Today, the lingua franca of the Chinese Community in Singapore is Mandarin. Although Hokkien is still spoken in Singapore today (particularly by the elderly Chinese population), it is not as widespread as before.

There is however a minority of Hokkien Singaporeans and Taiwanese living in Singapore working to help preserve, spread and revive the use of Hokkien Chinese in Singapore.

The ease of access to online Hokkien entertainment media and pop music from Taiwan helps to connect to the language and culture. Many Singaporeans are increasingly using online and social media platform such as Facebook and meetup group to learn, discuss, meet and interact with each other in Hokkien.

Some of the groups include:

Facebook Singapore Hokkien Language and Culture Society - Discussion forum on all aspects of Hokkien Chinese, with also a primary focus on the Singaporean Hokkien dialect and its variations from other variants of Hokkien.

Facebook Singapore Hokkien Meetup- Group that organizes regular meetups for language practice. It also organizes free language courses and sharing sessions for all who are interested.

The following list shows the colloquial readings of the numerals used to count objects.

Most ordinal numbers are formed by adding 第 [tē] in front of a cardinal number. In some cases, the literary reading of the number must then be used. For example, 第一 = tē-it, 第二 = tē-jī. See: Literary and colloquial readings of Chinese characters.

There are differences between Singaporean Hokkien and Taiwanese Hokkien in terms of vocabulary, pronunciation and grammar.

There are some words used in Singaporean Hokkien, which are the same in Taiwanese Hokkien, but are pronounced differently.

Influences from other local languages

Because Singapore is a multilingual country, Singaporean Hokkien has also been subjected to influence from many other languages spoken in Singapore. As a result, there are many non-Hokkien words that have been infused into Singaporean Hokkien, such as those from Malay, Teochew, Cantonese and English.

Loanwords from other Chinese varieties

There are some words used in Singaporean Hokkien that originated from some other Chinese varieties spoken in Singapore.

There are also many English loanwords used in Singaporean Hokkien. They are usually used when the speaker does not know what the equivalent of the Hokkien word for a certain term is. Some of these English terms are related to working and living in Singapore

When Singaporeans are speaking Hokkien, they will carry with them accents and tones from Anxi, Nan'an, Jin'jiang, Tong'an District region, as well as Teochew accent. In practice, it's common for Singaporeans to mix English conjunction word such as "and" into a Hokkien sentence, some would include "hngo2" (used as an exclamation remark in Jin'jiang /Nan'an).

No differentiation between Literary and Vernacular Pronunciation

A change of vowel from "ing" to "eng"

Although Singaporean Hokkien is inclined towards Quanzhou accent, certain pronunciations are influenced by accent from regions towards south of Zhangzhou (漳南 - Dongshan County/Yunxiao County/Zhangpu County/Pinghe County）, Haifeng as well as Teochew and Cantonese.

For many Singaporeans, there is a vowel change in pronunciation from "ing" /iəŋ/ to "eng" /eŋ/, as compared to Standard Hokkien such as Amoy Hokkien or Taiwanese Hokkien which uses "ing". In Quanzhou, Zhangzhou, Amoy and Taiwan, a number of words are pronounced by the vowel "ing", but in Singaporean Hokkien, it's pronounced as "eng". This is similar to the pronunciation in the region towards south of Zhangzhou, Teochew and Cantonese. Typically, the Southern Zhangzhou accent (漳南腔) pronounces "eng" /eŋ/ or /ɛŋ/ instead of "ing" /iŋ/.

Below is a table illustrating this difference

Pronunciation of "我" (I)

There are some differences in the sentence structure used by Singaporean Hokkien and Taiwanese Hokkien. 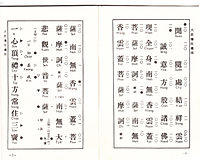 There existed some Hokkien writings, folk adage and ballad in Singapore written by early Chinese immigrants to Singapore. Amongst the various Hokkien folk ballad in Singapore, a few outstanding writings include the history and hardship of early Chinese immigrants to Singapore. For instance, 《雪梅思君》 (Soat-m̂-su-kun) (Snow and plum thinking of a gentlemen) is a folk ballad written about the loyalty and chastity of love.[2]

Another Singapore Hokkien Love Poetry is 《針線情》 (Chiam-sòaⁿ-chiâⁿ） (The emotions of needle and thread) has the following beautiful Hokkien writing:

There is another 18 sections in the poetry ballad 《行船歌》 (Hâng-chûn-koa) (Songs of traveling on boat), which talks about how early immigrants migrated to Singapore.

There is also another ballad called 《砰嘭水中流》 (Pin-pong-chúi-tiong-lâu) (Flow in the midst of water):

Singapore also held Getai during traditional Chinese festivals, for instance Hungry Ghost Festivals. During the Getai event, it is common to speak a number of Chinese varieties, including Hokkien, Teochew and Cantonese. During the 1960s, Hokkien Song was particularly popular. The Singapore Hokkien star Chen Jin Lang 陳金浪 was once the main compere and singer during the Hungry ghost festival. For instance, his famous song "10 levels of Hade" 《十殿閻君》 was especially popular.

The early Singaporean Hokkien opera had its origin from Gaojia opera, which was brought from Quanzhou to Singapore during the late 19th century. In 1927, the Taiwanese Gezai opera spread to Singapore. Because its lyrics and singing style were easier to understand, it had a huge impact and influence on Singapore. Consequently, by the mid 20th century, it had replaced Gaojia opera to become the mainstream hokkien opera in Singapore.

Singapore also has a Singapore Chinese Opera school to nurture talents in Opera, including Hokkien opera.

Singapore Hokkien Movies began to develop in the late 1990s, notably by infusing Hokkien Chinese into mainstream Chinese movies made by Singapore. Amongst these, movies directed by Jack Neo such as "I not stupid", "Money No Enough" were popular. They reflected the social environment of local Singaporeans.

Although Singapore radios started to ban Hokkien in the 1980s, Rediffusion Singapore continued to use Hokkien. This radio continued to broadcast programs in hokkien, and had great contribution to the culture of Singapore. For instance, the hokkien story-telling program (Amoy folks story 《廈語民間故事》 ) by Xu Shumei 許淑梅 was very popular.

Nanyin (Southern Music) was first spread to Singapore in 1901.[3] Many immigrants from Quanzhou began to establish various Nanyin organization. At this moment, the one which had survived include Siong Leng Musical Association.

Siong Leng Musical Association was established in 1941; it was responsible for promoting Nanyin, an important Chinese culture heritage as well as Liyuan opera. In 1977, then the Chairman of the association, Mr. Ting Ma Cheng (丁馬成), advocated the ASEAN Nanyin Performance (亞細安南樂大會奏), which helped to revive Nanyin. In addition, in order to educate the young people about this performance art, he also published two books on Nanyin and Liyuan opera.[4]

The current Siong Leng Musical Association is led by Ding Honghai (丁宏海) and it continues to promote Nanyin in Singapore. 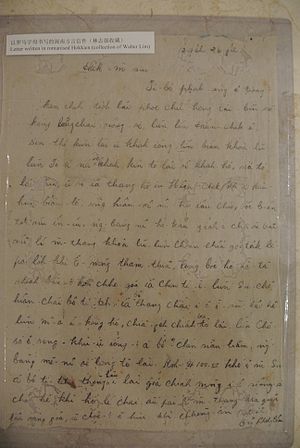 Provided by descendant of Tan Boon Hak, 陈文学, a cousin of Tan Kah Kee, who donated it to the Brownies for the exhibition

There were some past letters written in Peh-oe-ji from early Hokkien migrants in Singapore.

An example was provided by the descendant of Tan Book Hak, a cousin of Tan Kah Kee.[5]