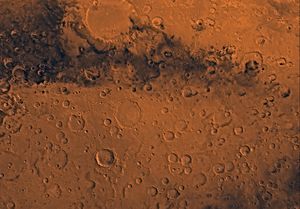 Wislicenus Crater and the Schiaparelli basin crater contains layers, also called strata. Many places on Mars show rocks arranged in layers.[2] Sometimes the layers are of different colors. Light-toned rocks on Mars have been associated with hydrated minerals like sulfates. The Mars Rover Opportunity examined such layers close-up with several instruments. Some layers are probably made up of fine particles because they seem to break up into fine dust. Other layers break up into large boulders so they are probably much harder. Basalt, a volcanic rock, is thought to in the layers that form boulders. Basalt has been identified on Mars in many places. Instruments on orbiting spacecraft have detected clay (also called phyllosilicates) in some layers. Scientists are excited about finding hydrated minerals such as sulfates and clays on Mars because they are usually formed in the presence of water.[3] Places that contain clays and/or other hydrated minerals would be good places to look for evidence of life.[4]

Rock can form layers in a variety of ways. Volcanoes, wind, or water can produce layers.[5] Layers can be hardened by the action of groundwater. Martian ground water probably moved hundreds of kilometers, and in the process it dissolved many minerals from the rock it passed through. When ground water surfaces in low areas containing sediments, water evaporates in the thin atmosphere and leaves behind minerals as deposits and/or cementing agents. Consequently, layers of dust could not later easily erode away since they were cemented together. On Earth, mineral-rich waters often evaporate forming large deposits of various types of salts and other minerals. Sometimes water flows through Earth's aquifers, and then evaporates at the surface just as is hypothesed for Mars. One location this occurs on Earth is the Great Artesian Basin of Australia.[6] On Earth the hardness of many sedimentary rocks, like sandstone, is largely due to the cement that was put in place as water passed through.

Impact craters generally have a rim with ejecta around them, in contrast volcanic craters usually do not have a rim or ejecta deposits. As craters get larger (greater than 10 km in diameter) they usually have a central peak.[8] The peak is caused by a rebound of the crater floor following the impact.[9] If one measures the diameter of a crater, the original depth can be estimated with various ratios. Because of this relationship, researchers have found that many Martian craters contain a great deal of material; much of it is believed to be ice deposited when the climate was different.[10] Sometimes craters expose layers that were buried. Rocks from deep underground are tossed onto the surface. Hence, craters can show us what lies deep under the surface.

The density of impact craters is used to determine the surface ages of Mars and other solar system bodies.[8] The older the surface, the more craters present. Crater shapes can reveal the presence of ground ice.

The area around craters may be rich in minerals. On Mars, heat from the impact melts ice in the ground. Water from the melting ice dissolves minerals, and then deposits them in cracks or faults that were produced with the impact. This process, called hydrothermal alteration, is a major way in which ore deposits are produced. The area around Martian craters may be rich in useful ores for the future colonization of Mars.[11] Studies on the earth have documented that cracks are produced and that secondary minerals veins are deposited in the cracks.[12][13][14] Images from satellites orbiting Mars have detected cracks near impact craters.[15] Great amounts of heat are produced during impacts. The area around a large impact may take hundreds of thousands of years to cool.[16][17][18] Many craters once contained lakes.[19][20][21] Because some crater floors show deltas, we know that water had to be present for some time. Dozens of deltas have been spotted on Mars.[22] Deltas form when sediment is washed in from a stream entering a quiet body of water. It takes a bit of time to form a delta, so the presence of a delta is exciting; it means water was there for a time, maybe for many years. Primitive organisms may have developed in such lakes; hence, some craters may be prime targets for the search for evidence of life on the Red Planet.[23]

Within the region is Pollack crater, which has light-toned rock deposits. Mars has an old surface compared to Earth. While much of Earth's land surface is just a few hundred million years old, large areas of Mars are billions of years old. Some surface areas have been formed, eroded away, then covered over with new layers of rocks. The Mariner 9 spacecraft in the 1970s photographed a feature that was called "White Rock.". Newer images revealed that the rock is not really white, but that the area close by is so dark that the white rock looks really white.[2] It was thought that this feature could have been a salt deposit, but information from the instruments on Mars Global Surveyor demonstrated rather that it was probably volcanic ash or dust. Today, it is believed that White Rock represents an old rock layer that once filled the whole crater that it's in, but today it has since been mostly eroded away. The picture below shows white rock with a spot of the same rock some distance from the main deposit, so it is thought that the white material once covered a far larger area.[24]