Sky Sports News HQ (SSNHQ) is a 24-hour sports news channel in the United Kingdom, Ireland and Nordic countries. It is run by Sky plc whose sports channels include Sky Sports 1, 2, 3, 4, 5 and Formula One as well as their HD channels.

The channel focuses predominantly on football (especially during the European football season – August–May) but reports on a wide range of sports; even sports to which Sky do not possess broadcasting rights receive limited coverage. The programming is presented by two reporters in the studio who read the news or introduce short clips featuring highlights and interviews covering a variety of topics. Tabs at the bottom of the screen give unrelated information on a wide range of sports, while a sidebar also shows unrelated league tables or other information. The content of the main studio feed generally repeats depending on the amount of news at a given time, varying from 20 minutes to an hour.

On 20 May 2007, SSN broadcast the Conference National play-off Final between Exeter City and Morecambe. This was the first live match to be shown on the channel since certain European games involving British teams were shown to provide exclusivity when competing with the then operational OnSports (owned by ITV) as Sky Sports News was not available at that time via digital terrestrial platforms. This was due to all other Sky Sports channels being occupied by live sport. This enabled Freeview viewers to watch a live match on Sky Sports. The station also had live coverage of Wales v New Zealand on 26 May 2007 and the La Liga tie between Espanyol and Barcelona in December 2007. 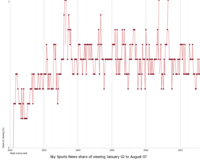 Sky Sports News launched on 1 October 1998, the launch date of BSkyB's Digital Satellite service, and was BSkyB's first digital only channel. On 10 April 2000, SSN relaunched as Sky Sports.com TV, to tie with the launch of the SkySports.com website.

The channel scrapped its ".com TV" look, and on 1 July 2001, Sky Sports News launched another graphics change. A major part of this was the standardisation, i.e. a more corporate look across the Sky channels. The channel also scrapped its slogan and just paid attention to the fact of the news.

From April 2002, Sky Sports News had another face-lift. The channel stayed in the same studio, but with a silver look replacing the old wooden bench, and there was a promise of being first for breaking news, along with much more useful information.

In 2004, Sky Sports News changed its image, with a more open blue look to the channel. The titles featured players such as Frank Lampard, Tim Cahill, Thierry Henry and Ryan Giggs passing the football to each other and unveiling the Sky Sports News logo. Programmes such as Ford Sports Centre were dropped, and replaced with shows such as Afternoon Report, Evening Update, Good Morning Sports Fans, Through the Night, and Sky Sports News at Ten.

The channel also previously used a different piece of music for each news programme, the most well-known of these being Republica's "Ready to Go", "Surface to Air" by The Chemical Brothers, "Shooting Star" by Deepest Blue, and "Club Foot" by Kasabian.

Sky Sports News was rebranded as 'Sky Sports News HQ' on 12 August 2014. The new studio is twice the size of the old one and includes an 18 square-metre video wall.[1] As part of the change the channel moved to Sky channel 401.[2] The channel also gained new graphics, as part of the launch.

A new look for the channel was introduced at 07:00 on 5 August 2007, in time for the 2007–08 football season. The main presentation structure was retained, including the right-hand information box displaying transfers and league table. The ticker at the bottom of the screen was also retained, however changed from white to red, with the yellow and black breaking news ticker being slightly tweaked but is largely similar to before. Also a black and white bar was added, this is visible for when a sports personality has died. The news ticker changed from blue to white, and had a tabbed effect showing the viewer what headlines are coming next.

Along with the changes to on-screen presentation, the revamp also included a new studio, new title sequences and a new theme tune. All of the old music was replaced and every show used the track "Requiem for a Tower, Movement 4" by Corner Stone Cues.

On 5 August 2009, the channel received a small make-over with new music sequence and a new font used for all on-screen displays.

On 6 January 2010, the channel underwent another slight revamp to the logo and side graphics.

In August 2010, the channel received an updated graphics package including new titles, music, and side graphics in-line with the launch of Sky Sports News HD.

On 4 July 2011, Sky Sports News HD moved to a new studio and with that came a minor change to on-screen graphics and side graphics.

Sky Sports News HD launched on 23 August 2010 on Sky channel 455,[3] transferring to channel 405 several months later. The HD channel offered enhancements such as widescreen viewing and sharper graphics. A range of new programmes, such as First Fast Now and Sky Sports News at Seven were launched plus new presenters, as well as the extension of existing offerings, such as Ed Chamberlin presenting a regular live Sunday afternoon sports update.[4]

Sky backed the launch of the channel with an extensive advertising campaign, including an advert featuring its current presenters, stressing that the new channel would make it the first sports broadcaster to have five high definition channels.[5]

Discrepancy between Sky and Freeview

From 2002, Sky Sports News was available free to view on digital terrestrial TV. On Sky's digital satellite service, the channel was made available to the Sports Pack from 1 September 2009, in addition to being available in the News & Events Pack.[6]

Sky Sports News was removed from Freeview on 23 August 2010 and replaced with Sky3+1, a one-hour timeshift Sky3.[7][8][9] Approval for the DTT change was needed from the regulator Ofcom, which told Sky and multiplex licence holder Arqiva that the move "would not unacceptably diminish the capacity of the services broadcast to appeal to a variety of tastes and interests."[10]

Sky claimed that the move back to pay TV allowed them to improve the channel through increased editorial investment.[11]

On 1 March 2007, Virgin Media removed Sky's basic channels including Sky One, Sky Two, Sky News, Sky Sports News, Sky Travel and Sky Travel Extra, from their Television Services after a dispute between Virgin Media and BSkyB caused by the expiry of their carriage agreement and their inability to reach a new deal,[12] after attempts were made to reach an agreement. At Midnight, Sky Sports News was removed, and the name of the station in the electronic programming guide was changed to "OLD SKY SPORTS SNOOZE". As a direct rival to Sky Sports News, Virgin Media and Setanta Sports launched Setanta Sports News on 30 November 2007.

A deal was eventually reached between Virgin and Sky resulting in Sky Sports News returning to the Cable platform on 13 November 2008 on channel number 517.[13]

Until 1 July 2013, two hours of live feed (daily at 07:00 BST, weekdays at 17:00 BST) and one hour of delayed feed (daily at 23:00 BST) were picked up by Fox Soccer in the United States; both Fox Soccer Channel and Sky Sports are News Corporation companies. More hours of the channel were picked up in critical periods such as the end of transfer windows and coverage of qualifying draws for Euro tournaments. The American simulcasts were discontinued on that date as Fox Cable Networks begins to wind down Fox Soccer's operations for 2 September 2013 launch of FX sister channel FXX on its channel space. As of mid-2014, the only Sky output carried on an American network is darts coverage and the Sky Sports 2's coverage and surrounding programming such as The Verdict involving the England cricket team on ONE World Sports.