From Infogalactic: the planetary knowledge core
Jump to: navigation, search
This article is about the Tibetan practice. For the Xinran Xue novel, see Sky Burial. For the similar Parsi Zoroastrian practice, see Dakhma. 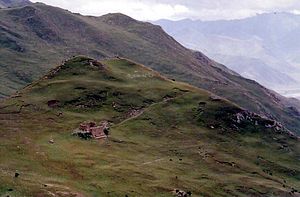 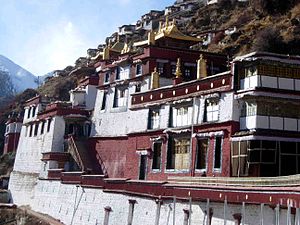 Sky burial (Tibetan: བྱ་གཏོར་, Wylie: bya gtor, lit. "bird-scattered"[1]) is a funeral practice in which a human corpse is placed on a mountaintop to decompose while exposed to the elements or to be eaten by scavenging animals, especially carrion birds. It is a specific type of the general practice of excarnation. It is practiced in the Chinese provinces and autonomous regions of Tibet, Qinghai, Sichuan and Inner Mongolia, as well as in Mongolia, Bhutan, Nepal, and parts of India such as Sikkim and Zanskar. The locations of preparation and sky burial are understood in the Vajrayana Buddhist traditions as charnel grounds. Comparable practices are part of Zoroastrian burial practices where deceased are exposed to the elements and birds of prey on stone structures called Dakhma.[2] Few such places remain operational today due to religious marginalisation, urbanisation and the decimation of vulture populations.[3][4]

The majority of Tibetan people and many Mongols adhere to Vajrayana Buddhism, which teaches the transmigration of spirits. There is no need to preserve the body, as it is now an empty vessel. Birds may eat it or nature may cause it to decompose. The function of the sky burial is simply to dispose of the remains in as generous a way as possible (the source of the practice's Tibetan name). In much of Tibet and Qinghai, the ground is too hard and rocky to dig a grave, and, due to the scarcity of fuel and timber, sky burials were typically more practical than the traditional Buddhist practice of cremation. In the past, cremation was limited to high lamas and some other dignitaries,[5] but modern technology and difficulties with sky burial have led to an increased use by commoners.[6]

The Tibetan sky-burials appear to have evolved from ancient practices of defleshing corpses as discovered in archeological finds in the region.[7] These practices most likely came out of practical considerations,[8][9][10] but they could also be related to more ceremonial practices similar to the suspected sky burial evidence found at Göbekli Tepe (11,500 years before present) and Stonehenge (4,500 years BP).[citation needed] Most of Tibet is above the tree line, and the scarcity of timber makes cremation economically unfeasible. Additionally, subsurface interment is difficult since the active layer is not more than a few centimeters deep, with solid rock or permafrost beneath the surface.

The customs are first recorded in an indigenous 12th-century Buddhist treatise, which is colloquially known as the Book of the Dead (Bardo Thodol).[11] Tibetan tantricism appears to have influenced the procedure.[12][13] The body is cut up according to instructions given by a lama or adept.[14]

Mongolians traditionally buried their dead (sometimes with human or animal sacrifice for the wealthier chieftains) but the Tümed adopted sky burial following their conversion to Tibetan Buddhism under Altan Khan during the Ming Dynasty and other banners subsequently converted under the Manchu Qing Dynasty.[15]

Sky burial was initially treated as a primitive superstition and sanitation concern by the Communist governments of both the PRC and Mongolia; both states closed many temples[15] and China banned the practice completely from the Cultural Revolution of the late 1960s until the 1980s.[16] Sky burial nonetheless continued to be practiced in rural areas and has even received official protection in recent years. However, the practice continues to diminish for a number of reasons, including restrictions on its practice near urban areas and diminishing numbers of vultures in rural districts. Where the vultures remain, they often react badly to corpses treated with medicine and disinfectants at modern hospitals. Finally, Tibetan practice holds that the yak carrying the body to the charnel grounds should be set free, making the rite much more expensive than a service at a crematorium.[6][17]

For Tibetan Buddhists, sky burial and cremation are templates of instructional teaching on the impermanence of life.[14] Jhator is considered an act of generosity on the part of the deceased, since the deceased and his/her surviving relatives are providing food to sustain living beings. Such generosity and compassion for all beings are important virtues in Buddhism.[18]

Although some observers have suggested that jhator is also meant to unite the deceased person with the sky or sacred realm, this does not seem consistent with most of the knowledgeable commentary and eyewitness reports, which indicate that Tibetans believe that at this point life has completely left the body and the body contains nothing more than simple flesh.

Only people who directly know the deceased usually observe it, when the excarnation happens at night.

The tradition and custom of the jhator afforded Traditional Tibetan medicine and thangka iconography with a particular insight into the interior workings of the human body. Pieces of the human skeleton were employed in ritual tools such as the skullcup, thigh-bone trumpet, etc.

The 'symbolic bone ornaments' (Skt: aṣṭhiamudrā; Tib: rus pa'i rgyanl phyag rgya) are also known as "mudra" or 'seals'. The Hevajra Tantra identifies the Symbolic Bone Ornaments with the Five Wisdoms and Jamgon Kongtrul in his commentary to the Hevajra Tantra explains this further.[19]

A traditional jhator is performed in specified locations in Tibet (and surrounding areas traditionally occupied by Tibetans). Drigung Monastery is one of the three most important jhator sites.

The procedure takes place on a large flat rock long used for the purpose. The charnel ground (durtro) is always higher than its surroundings. It may be very simple, consisting only of the flat rock, or it may be more elaborate, incorporating temples and stupa (chorten in Tibetan).

Relatives may remain nearby[20] during the jhator, possibly in a place where they cannot see it directly. The jhator usually takes place at dawn.

The full jhator procedure (as described below) is elaborate and expensive. Those who cannot afford it simply place their deceased on a high rock where the body decomposes or is eaten by birds and animals.

Accounts from observers vary. The following description is assembled from multiple accounts by observers from the U.S. and Europe. References appear at the end.

Prior to the procedure, monks may chant mantra around the body and burn juniper incense – although ceremonial activities often take place on the preceding day.

The work of disassembling of the body may be done by a monk, or, more commonly, by rogyapas ("body-breakers").

All the eyewitness accounts remarked on the fact that the rogyapas did not perform their task with gravity or ceremony, but rather talked and laughed as during any other type of physical labor. According to Buddhist teaching, this makes it easier for the soul of the deceased to move on from the uncertain plane between life and death onto the next life. 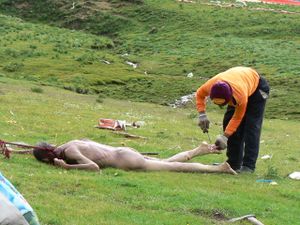 A body being prepared for Sky burial in Sichuan.

According to most accounts, vultures are given the whole body. Then, when only the bones remain, these are broken up with mallets, ground with tsampa (barley flour with tea and yak butter, or milk), and given to the crows and hawks that have waited for the vultures to depart.

In one account, the leading rogyapa cut off the limbs and hacked the body to pieces, handing each part to his assistants, who used rocks to pound the flesh and bones together to a pulp, which they mixed with tsampa before the vultures were summoned to eat.

Sometimes the internal organs were removed and processed separately, but they too were consumed by birds. The hair is removed from the head and may be simply thrown away; at Drigung, it seems, at least some hair is kept in a room of the monastery.

None of the eyewitness accounts specify which kind of knife is used in the jhator. One source states that it is a "ritual flaying knife" or trigu (Sanskrit kartika), but another source expresses scepticism, noting that the trigu is considered a woman's tool (rogyapas seem to be exclusively male). 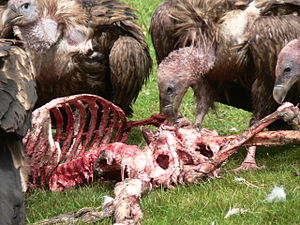 In places where there are several jhator offerings each day, the birds sometimes have to be coaxed to eat, which may be accomplished with a ritual dance. It is considered a bad omen if the vultures will not eat, or if even a small portion of the body is left after the birds fly away.

In places where fewer bodies are offered, the vultures are more eager- and sometimes have to be fended off with sticks during the initial preparations.

A jhator was filmed, with permission from the family, for Frederique Darragon's documentary Secret Towers of the Himalayas, which aired on the Science Channel in Fall 2008. The camera work was deliberately careful to never show the body itself, while documenting the procedure, birds, and tools.

A discussion of "air burial" appears in issue 55 of Neil Gaiman's Sandman.

The ritual was featured in films such as The Horse Thief, Kundun, and Himalaya.

A sky burial is shown and addressed in Pure Flix Entertainment video series Travel the Road in season 2, episode 6.

At the sky burial site near the Larung Gar Buddhist Institute near Sertar, Sichuan, the Chinese have built a "Temple of Death" to attract and entertain the growing numbers of Chinese tourists, turning this simple and practical ritual into a tourist attraction.

Dan Simmons' 2013 novel The Abominable describes the sky burial of a Sherpa.

In season eight of Bones, Temperance Brennan mentions that she would like a sky burial.

A sky burial was shown in BBC's Human Planet - Mountains.

Dadawa's song "Sky Burial" is the third track on her second album, Sister Drum, which is dedicated to Tibetan culture.