Ottis Dewey "Slim" Whitman (January 20, 1923 – June 19, 2013), known professionally as Slim Whitman, was an American country music and western music singer, songwriter and instrumentalist known for his yodeling abilities and his smooth, high, three-octave-range falsetto in a style christened as "countrypolitan". He stated that he had sold in excess of 120 million records. In the 1950s Whitman toured with Elvis Presley as the opening act.[1] In the 1990s a new generation was exposed to Whitman through his songs featured in the film Mars Attacks!; his iconic Indian Love Call would kill the invading Martians every time the record was played.

Although once known as America's Favorite Folk Singer, he was consistently more popular throughout Europe, and in particular the United Kingdom, than in his native America, especially with his covers of pop standards, film songs, love songs, folk tunes and melodic gospel hymns. His 1955 hit single "Rose Marie" spent 11 weeks at #1 on the UK Singles Chart and held the Guinness World Record for the longest time at number one on the UK Singles Chart for 36 years until Bryan Adams broke the record in 1991 and was listed in British Hit Singles & Albums. In the US his Indian Love Call (1952) and a reworking of the Doris Day hit "Secret Love" (1953) both reached No. 2 on the Billboard country chart. Whitman had a string of top ten hits from the mid-1960s and into the 1970s and became known to a new generation of fans through television direct marketing in the 1980s. Throughout the 1990s and into the 21st century, he continued to tour extensively around the world and release new material. His last album, Twilight on the Trail, was produced by his son Byron Whitman and was released in 2010, when Whitman was 87 years old.

Whitman was born Ottis Dewey Whitman Jr, in Oak Park, Tampa, Florida, on January 20, 1923.,[2][3][4] one of six siblings, to Ottis and Lucy Whitman. Growing up, he liked the country music of Jimmie Rodgers and the songs of Gene Autry, but he did not embark on a musical career of his own until the end of World War II, after he had served in the South Pacific with the United States Navy. Whilst aboard ship he would sing and entertain members aboard. This resulted in the captain blocking his transfer to another ship—hence saving his life, as the other ship later sank with no surviving hands. Whitman's early ambitions were to become either a boxer or a professional baseball player.

Whitman was a self-taught left-handed guitarist, though he was right-handed. He had lost almost all of the second finger on his left hand in an accident while working at a meat packing plant.[5] He worked odd jobs at a Tampa shipyard while developing a musical career, eventually performing with bands known as the Variety Rhythm Boys and the Light Crust Doughboys. He was briefly nicknamed The Smiling Starduster after a stint with a group called The Stardusters. Whitman's first big break came when talent manager "Colonel" Thomas Parker heard him singing on the radio and offered to represent him.[5] After signing with RCA Records,[5] he was billed as "the cowboy singer Slim Whitman", after Canadian singer Wilf Carter, who was known in the United States as Montana Slim. Whitman released his first single in 1948, "I'm Casting My Lasso Towards The Sky", complete with yodel. He toured and sang in a variety of venues, including the radio show Louisiana Hayride.

At first he was unable to make a living from music, and kept a part-time job at a post office. That changed in the early 1950s after he recorded a version of the Bob Nolan hit "Love Song of the Waterfall", which made it into the country music top ten.[2] His next single, "Indian Love Call", taken from the light operetta Rose-Marie, was even more successful, reaching number two in the country music charts and appearing in the US pop music chart's top ten.[2]

A yodeller, Whitman avoided country music's "down on yer luck, buried in booze" songs, preferring instead to sing laid-back romantic melodies about simple life and love. Critics dubbed his style "countrypolitan," owing to its fusion of country music and a more sophisticated crooning vocal style.[6] Although he recorded many country and western tunes, including hits "Tumbling Tumbleweeds", "Singing Hills", and "The Cattle Call", love and romance songs like "Serenade", "Something Beautiful (to remember)", and "Keep It a Secret" figured prominently in his repertoire.

In 1955 he would have a No.1 hit on the pop music charts in the United Kingdom with the theme song to the operetta "Rose Marie." With nineteen weeks in the charts and eleven weeks at the top of the UK Singles Chart,[7] the song set a record that lasted for 36 years. In 1956 he became the first-ever country music singer to perform at the London Palladium.[8] Soon after, Whitman was invited to join the Grand Ole Opry, and in 1957, along with other musical stars, he appeared in the film musical Jamboree. Despite this exposure, he never achieved the level of stardom in the United States that he did in Britain, where he had a number of other hits during the 1950s.[7] Throughout the early 1970s, he continued to record and was a guest on Wolfman Jack's television show The Midnight Special.[8] At the time, Whitman's recording efforts were yielding only minor hits in the US. The mid-1970s were a successful time for Whitman in the UK Albums Chart. In 1976 a compilation album, The Very Best of Slim Whitman, was number one for six weeks, staying seventeen weeks on the chart. Another number one album followed in 1977 with Red River Valley: four weeks at number one and fourteen weeks on the chart. Later the same year his album Home on the Range made number 2 on the chart and amassed a chart stay of thirteen weeks, only to be kept from the top place by 20 Golden Greats by the Supremes.[7][9]

The TV albums briefly made Whitman a household name in America for the first time in his career, resulting in everything from a first-time appearance on The Tonight Show starring Johnny Carson to Whitman being parodied in a comic skit on SCTV with him (played by Joe Flaherty) starring in the Che-like male lead in an Evita-like Broadway musical on the life of Indira Gandhi. More importantly, the TV albums gave him a brief resurgence in mainstream country music with new album releases on major labels and a few new singles on the country charts. During this time he toured Europe and Australia with moderate success.

On January 20, 2008, on what was, coincidently, Whitman's 85th birthday, a premature obituary believed to have been started by an erroneous report was published by the Nashville Tennessean newspaper and later picked up virally on the newspaper's website.[10]

In 2010 Whitman released the album Twilight on the Trail after more than eight years in production, his first new studio album in 26 years. It was produced by his son Byron Whitman and featured many well-known session musicians, including long-time band member Harold Bradley.[8]

After 1957 Whitman lived at his estate, Woodpecker Paradise, in Middleburg, a city located south of Orange Park, Florida, in Clay County.[11][12]

In 2009 Whitman's wife of 67 years, Alma Geraldine "Jerry" Crist Whitman, born in Kansas, died at the age of 84. She was a songwriter and embroiderer as well as the daughter of a church minister, A.D. Crist, founder of the Church of the Brethren. Whitman and his wife had a daughter, Sharron Beagle, and a son, Byron K. Whitman, who is also a performer and music producer, who has released a number of recordings and who toured and recorded with his father on numerous occasions. They had two grandchildren and two great-grandchildren.[13] 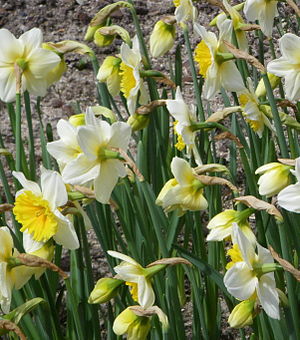 For his contribution to the recording industry, Slim Whitman was given the accolade of a star on the Hollywood Walk of Fame at 1709 Vine Street.[17] He was inducted into the Country Music Hall of Fame and Museum's Walkway of Stars in 1968.[17]

Beatle George Harrison cited Whitman as an early influence: "The first person I ever saw playing a guitar was Slim Whitman, either a photo of him in a magazine or live on television. Guitars were definitely coming in."[18] When a young Paul McCartney purchased his first guitar, the left-handed musician was unsure how to play an instrument that was manufactured and strung for a right-handed player. It was not until McCartney saw a picture of Whitman playing left-handed that he re-strung his guitar so that he too could play left-handed.[19][20] American pop singer Michael Jackson cited Whitman as one of his ten favorite vocalists.[21]

The 1996 film Mars Attacks! features Whitman's rendition of "Indian Love Call" as a weapon against alien invaders.[8][22] In 2003, Rob Zombie used Whitman's version of "I Remember You" in his movie directorial debut in House of 1000 Corpses.[8]

This audio file was created from a revision of the "Slim Whitman" article dated 2006-01-25, and does not reflect subsequent edits to the article. (Audio help)
More spoken articles
Retrieved from "https://infogalactic.com/w/index.php?title=Slim_Whitman&oldid=4037321"
Categories:
Hidden categories: