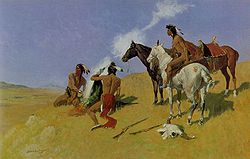 Native Americans on a painting by Frederic Remington

The smoke signal is one of the oldest forms of long-distance communication. It is a form of visual communication used over long distance. In general smoke signals are used to transmit news, signal danger, or gather people to a common area.

In Ancient China, soldiers stationed along the Great Wall would alert each other of impending enemy attack by signaling from tower to tower. In this way, they were able to transmit a message as far away as 750 kilometres (470 mi)[citation needed] in just a few hours.

Polybius, a Greek historian, devised a more complex system of alphabetical smoke signals around 150 BC, which converted Greek alphabetic characters into numeric characters. It enabled messages to be easily signaled by holding sets of torches in pairs. This idea, known as the "Polybius square", also lends itself to cryptography and steganography. This cryptographic concept has been used with Japanese Hiragana and the Germans in the later years of the First World War.

The North American indigenous peoples also communicated via smoke signal. Each tribe had its own signaling system and understanding. A signaler started a fire on an elevation typically using damp grass, which would cause a column of smoke to rise. The grass would be taken off as it dried and another bundle would be placed on the fire. Reputedly the location of the smoke along the incline conveyed a meaning. If it came from halfway up the hill, this would signify all was well, but from the top of the hill it would signify danger.[citation needed]

Smoke signals remain in use today. In Rome, the College of Cardinals uses smoke signals to indicate the selection of a new Pope during a papal conclave. Eligible cardinals conduct a secret ballot until someone receives a vote of two-thirds plus one. The ballots are burned after each vote. Black smoke indicates a failed ballot, while white smoke means a new Pope has been elected.

Lewis and Clark's journals cite several occasions when they adopted the Native American method of setting the plains on fire to communicate the presence of their party or their desire to meet with local tribes.[1][2]

Yámanas used fire to send messages by smoke signals, for instance if a whale drifted ashore.[3] The large amount of meat required notification of many people, so that it would not decay.[4] They might also have used smoke signals on other occasions, thus it is possible that Magellan saw such fires (which inspired him to name the landscape Tierra del Fuego) but he may have seen the smoke or lights of natural phenomena.[5][6]

Aboriginal Australians in the Western Desert would send up smoke to notify others of their presence, particularly when entering lands which were not their own.[7] 'Putting up a smoke' would often result in nearby individuals or groups replying with their own signals.[8]