From Infogalactic: the planetary knowledge core
Jump to: navigation, search
Not to be confused with Status in Roman legal system. 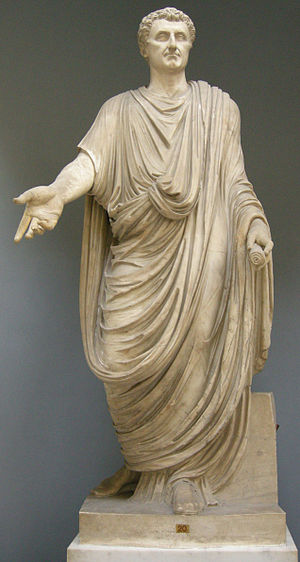 The toga, shown here on a statue restored with the head of Nerva, was the distinctive garb of Roman male citizens

Social class in ancient Rome was hierarchical, but there were multiple and overlapping social hierarchies, and an individual's relative position in one might be higher or lower than in another.[1] The status of freeborn Romans during the Republic was established by:

There were also classes of non-citizens with different legal rights, such as peregrini. Under Roman law, slaves were considered property and had no rights as such. However, some laws regulated slavery and offered slaves protections not extended to other forms of property such as animals. Slaves who had been manumitted were freedmen (liberti), and for the most part enjoyed the same legal rights and protections as free-born citizens.

Roman society was patriarchal in the purest sense; the male head of household (paterfamilias) held special legal powers and privileges that gave him jurisdiction (patria potestas) over all the members of his familia, a more encompassing term than its modern derivative "family" that included adult sons, his wife (but only in Rome's earlier history, when marriage cum manu was practiced), married daughters (in the Classical period of Roman history), and various relatives as well as slaves. The patron-client relationship (clientela), with the word patronus deriving from pater, "father", was another way in which Roman society was organized into hierarchical groups, though clientela also functioned as a system of overlapping social networks. A patron could be the client of a socially superior or more powerful patron; a client could have multiple patrons.[2]

In the Roman Kingdom and the early Roman Republic the most important division in Roman society was between the patricians, a small elite who monopolised political power, whose ancestry was traced to the first Senate established by Romulus,[3] and the plebeians, who comprised the majority of Roman citizens. Adult males who were not Roman citizens, whether free or slave, fall outside this division. Women and children were also not citizens, but took the social status of their father or husband, which granted them various rights and protections not available to the women and children of men of lower rank.

The common assumptions that the patricians and the Roman elite were one and the same throughout the history of ancient Rome, and that all plebeians were of non-elite status throughout the history of ancient Rome, are entirely incorrect. From the Late Republic era onwards many members of the elite, including an increasing proportion of senators, came from plebeian families. The first Roman Emperor, Augustus, was of plebeian origin, as were many of his successors. By the Late Empire, few members of the Senate were from the original patrician families, most of which had died out. Rome continued to have a hierarchical class system, but it was no longer dominated by the distinction between patricians and plebeians.

Originally, all public offices were open only to patricians, and the classes could not intermarry. Plebeians and Patricians were always at odds due to the fact that Plebeians wanted to increase their power.[4] A series of social struggles (see Conflict of the Orders) saw the plebs secede from the city on three occasions, the last in 297 BC, until their demands were met. They won the right to stand for office, the abolition of the intermarriage law, and the creation of office of tribune of the plebs. This office, founded in 494 BC as a result of a plebeian secession, was the main legal bulwark against the powers of the patrician class, and only plebeians were eligible. The tribunes originally had the power to protect any plebeian from a patrician magistrate. Later revolts forced the Senate to grant the tribunes additional powers, such as the right to veto legislation. A tribune's person was sacrosanct, and he was obliged to keep an open house at all times while in office. Some patricians, notably Clodius Pulcher in the late 60s BC, petitioned to be assigned plebeian status, in order to accumulate the political influence among the people that the office of tribune afforded. The conflict between the classes came to a climax in 287 BC when patricians and plebeians were declared equal under the law.

Following these changes the distinction between patrician and plebeian status became less important, and by the Late Republic the only patrician prerogatives were certain priesthoods. Over time, some patrician families declined, some plebeian families rose in status, and the composition of the ruling class changed. A plebeian who was the first of his line to become consul was known as a novus homo ("new man"), and he and his descendants became "noble" (nobiles). Notable examples of novi homines are the seven-time consul Marius, and Cicero, whose rise was unusual in that it was driven by his oratorical and intellectual abilities rather than, as with Marius, military success. During the Empire, patricius became a title of nobility bestowed by emperors.[5][6]

The census divided citizens into six complex classes based on property. The richest were the senatorial class, who during the Late Republic had to be worth at least 400,000 sestertii, the same as the equites; when Augustus reformed the senate during the first years of the Principate, he raised the property requirement to 1,000,000 sestertii.[7] The wealth of the senatorial class was based on ownership of large agricultural estates, and by custom members did not engage in commercial activity.

Below the senatores in rank, but above others were the equites ("equestrians" or "knights"), with 400,000 sestertii, who could engage in commerce and formed an influential business class. Certain political and quasi-political positions were filled by equites, including tax farming and, under the Principate, leadership of the Praetorian Guard. Below the equites were three more classes of property-owning citizens; and lastly the proletarii, whose property was valued below 11,000 asses.[8]

Free-born women in ancient Rome were citizens (cives), but could not vote or hold political office.[9] The form of Roman marriage called conubium, for instance, requires that both spouses be citizens; like men from towns granted m,,,civitas sine suffragio, women eligible for legal marriage were citizens without suffrage. The legal status of a mother as a citizen affected her son's citizenship.[10] The phrase ex duobus civibus Romanis natos ("children born of two Roman citizens") indicates that a Roman woman was regarded as having citizen status, in specific contrast to a peregrina.

The Latin Right was a form of citizenship with limited rights. It was conferred originally on the allied towns of Latium in the Republica era, and gradually extended to communities throughout the Empire. Latin citizens had rights, but not the vote, although their leading magistrates could become full citizens.

Free-born foreign subjects were known as peregrini, and special laws existed to govern their conduct and disputes. These distinctions continued until AD 212, when Caracalla extended full Roman citizenship to all free-born men in the empire.

Slaves (servi) were not citizens, and lacked even the legal standing accorded free-born foreigners. For the most part, slaves descended from debtors and from prisoners of war, especially women and children captured during sieges and other military campaigns in Greece, Italy, Spain, and Carthage. In the later years of the Republic and into the Empire, more slaves came from newly conquered areas of Gaul, Britain, North Africa, and Asia Minor. Many slaves were created as the result of Rome's conquest of Greece, but Greek culture was considered in some respects superior to that of Rome: hence Horace's famous remark Graecia capta ferum victorem cepit ("Captured Greece took her savage conqueror captive"). The Roman playwright Terence is thought to have been brought to Rome as a slave. Thus slavery was regarded as a circumstance of birth, misfortune, or war; it was defined in terms of legal status, or rather the lack thereof, and was neither limited to or defined by ethnicity or race, nor regarded as an inescapably permanent condition.

Slaves who lacked skills or education performed agricultural or other forms of manual labor. Those who were violent or disobedient, or who for whatever reason were considered a danger to society, might be sentenced to labor in the mines, where they suffered under inhumane conditions. Slaves subjected to harsh labor conditions also had few if any opportunities to obtain their freedom.

Since slaves were legally property, they could be disposed of by their owners at any time. All children born to female slaves were slaves. Some slave owners, as for instance Tacitus,[citation needed] freed slaves whom they believed to be their natural children. Slaves who had the education or skills to earn a living were often manumitted upon the death of their owner as a condition of his will. Slaves who conducted business for their masters were also permitted to earn and save money for themselves, and some might be able to buy their own freedom.

Over time, legislation was passed to protect the lives and health of slaves. Although many prostitutes were slaves, for instance, the bill of sale for some slaves stipulated that they could not be used for commercial prostitution.[11]

Freedmen (liberti) were freed slaves, whose free-born children were full citizens. The status of liberti developed throughout the Republic as their number increased. Livy states[citation needed] that freedmen in the Early Republic mainly joined the lower classes of the plebeians. Juvenal, writing during the Empire when financial considerations dictated economic class, describes freedmen who had been accepted into the equestrian class.[citation needed]

Freedmen were often highly educated and made up the bulk of the civil service during the early Empire. The Augustan poet Horace was himself the child of a freedman from Venusia in southern Italy. Many became enormously wealthy as the result of bribes, fraud, or other forms of corruption, or were given large estates by the Emperor they served.[citation needed] Other freedmen engaged in commerce, amassing vast fortunes often only rivalled by those of the wealthiest nobiles. Many of the Satires of Juvenal contain angry denouncements of the pretensions of wealthy freedmen, some 'with the chalk of the slave market still on their heel'. Juvenal saw these successful men as nouveaux riches who were far too ready to show off their (often ill-gotten) wealth. Another famous caricature is seen in the absurdly extravagant character of Trimalchio in Satyricon. The majority of freedmen, however, joined the plebeian classes, and often worked as farmers or tradesmen.