From Infogalactic: the planetary knowledge core
Jump to: navigation, search
File:Soil sci.jpg
A sylviculturist, at work

Soil science is the study of soil as a natural resource on the surface of the Earth including soil formation, classification and mapping; physical, chemical, biological, and fertility properties of soils; and these properties in relation to the use and management of soils.[1]

Sometimes terms which refer to branches of soil science, such as pedology (formation, chemistry, morphology and classification of soil) and edaphology (influence of soil on organisms, especially plants), are used as if synonymous with soil science. The diversity of names associated with this discipline is related to the various associations concerned. Indeed, engineers, agronomists, chemists, geologists, physical geographers, ecologists, biologists, microbiologists, sylviculturists, sanitarians, archaeologists, and specialists in regional planning, all contribute to further knowledge of soils and the advancement of the soil sciences.

Soil scientists have raised concerns about how to preserve soil and arable land in a world with a growing population, possible future water crisis, increasing per capita food consumption, and land degradation.[2]

Soil occupies the pedosphere, one of Earth's spheres that the geosciences use to organize the Earth conceptually. This is the conceptual perspective of pedology and edaphology, the two main branches of soil science. Pedology is the study of soil in its natural setting. Edaphology is the study of soil in relation to soil-dependent uses. Both branches apply a combination of soil physics, soil chemistry, and soil biology. Due to the numerous interactions between the biosphere, atmosphere and hydrosphere that are hosted within the pedosphere, more integrated, less soil-centric concepts are also valuable. Many concepts essential to understanding soil come from individuals not identifiable strictly as soil scientists. This highlights the interdisciplinary nature of soil concepts.

Dependence on and curiosity about soil, exploring the diversity and dynamics of this resource continues to yield fresh discoveries and insights. New avenues of soil research are compelled by a need to understand soil in the context of climate change,[3] greenhouse gases, and carbon sequestration. Interest in maintaining the planet's biodiversity and in exploring past cultures has also stimulated renewed interest in achieving a more refined understanding of soil.

Most empirical knowledge of soil in nature comes from soil survey efforts. Soil survey, or soil mapping, is the process of determining the soil types or other properties of the soil cover over a landscape, and mapping them for others to understand and use. It relies heavily on distinguishing the individual influences of the five classic soil forming factors. This effort draws upon geomorphology, physical geography, and analysis of vegetation and land-use patterns. Primary data for the soil survey are acquired by field sampling and supported by remote sensing. 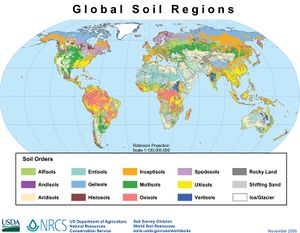 Map of global soil regions from the USDA

Many other classification schemes exist, including vernacular systems. The structure in vernacular systems are either nominal, giving unique names to soils or landscapes, or descriptive, naming soils by their characteristics such as red, hot, fat, or sandy. Soils are distinguished by obvious characteristics, such as physical appearance (e.g., color, texture, landscape position), performance (e.g., production capability, flooding), and accompanying vegetation.[4] A vernacular distinction familiar to many is classifying texture as heavy or light. Light soil content and better structure, take less effort to turn and cultivate. Contrary to popular belief, light soils do not weigh less than heavy soils on an air dry basis nor do they have more porosity.

Vasily Dokuchaev, a Russian geologist, geographer and early soil scientist, is credited with identifying soil as a resource whose distinctness and complexity deserved to be separated conceptually from geology and crop production and treated as a whole.

Previously, soil had been considered a product of chemical transformations of rocks, a dead substrate from which plants derive nutritious elements. Soil and bedrock were in fact equated. Dokuchaev considers the soil as a natural body having its own genesis and its own history of development, a body with complex and multiform processes taking place within it. The soil is considered as different from bedrock. The latter becomes soil under the influence of a series of soil-formation factors (climate, vegetation, country, relief and age). According to him, soil should be called the "daily" or outward horizons of rocks regardless of the type; they are changed naturally by the common effect of water, air and various kinds of living and dead organisms.[5]

A 1914 encyclopedic definition: "the different forms of earth on the surface of the rocks, formed by the breaking down or weathering of rocks".[6] serves to illustrate the historic view of soil which persisted from the 19th century. Dokuchaev's late 19th century soil concept developed in the 20th century to one of soil as earthy material that has been altered by living processes.[7] A corollary concept is that soil without a living component is simply a part of earth's outer layer.

Further refinement of the soil concept is occurring in view of an appreciation of energy transport and transformation within soil. The term is popularly applied to the material on the surface of the Earth's moon and Mars, a usage acceptable within a portion of the scientific community. Accurate to this modern understanding of soil is Nikiforoff's 1959 definition of soil as the "excited skin of the sub aerial part of the earth's crust".[8]

Academically, soil scientists tend to be drawn to one of five areas of specialization: microbiology, pedology, edaphology, physics or chemistry. Yet the work specifics are very much dictated by the challenges facing our civilization's desire to sustain the land that supports it, and the distinctions between the sub-disciplines of soil science often blur in the process. Soil science professionals commonly stay current in soil chemistry, soil physics, soil microbiology, pedology, and applied soil science in related disciplines

One interesting effort drawing in soil scientists in the USA as of 2004[update] is the Soil Quality Initiative. Central to the Soil Quality Initiative is developing indices of soil health and then monitoring them in a way that gives us long term (decade-to-decade) feedback on our performance as stewards of the planet. The effort includes understanding the functions of soil microbiotic crusts and exploring the potential to sequester atmospheric carbon in soil organic matter. The concept of soil quality, however, has not been without its share of controversy and criticism, including critiques by Nobel Laureate Norman Borlaug and World Food Prize Winner Pedro Sanchez.

A more traditional role for soil scientists has been to map soils. Most every area in the United States now has a published soil survey, which includes interpretive tables as to how soil properties support or limit activities and uses. An internationally accepted soil taxonomy allows uniform communication of soil characteristics and functions. National and international soil survey efforts have given the profession unique insights into landscape scale functions. The landscape functions that soil scientists are called upon to address in the field seem to fall roughly into six areas:

There are also practical applications of soil science that might not be apparent from looking at a published soil survey.

Fields of application in soil science