The somatosensory system (also somatosensory nervous system or SNS) is a complex system of nerve cells that responds to changes to the surface or internal state of the body. Nerve cells called "sensory receptors" (including thermoreceptors, mechanoreceptors, chemoreceptors and nociceptors) send signals along a chain of nerve cells to the spinal cord where they may be processed by other nerve cells and then relayed to the brain for further processing. Sensory receptors are found in many parts of the body including the skin, epithelial tissues, skeletal muscles, bones and joints, internal organs, and the cardiovascular system.

Somatic senses are sometimes referred to as somesthetic senses,[1] with the understanding that somesthesis includes touch, proprioception and (depending on usage) also haptic perception.[2]

The mapping of the body surfaces in the brain is called a homunculus and plays a fundamental role in the creation of body image. This brain-surface ("cortical") map is not immutable, however. Dramatic shifts can occur in response to stroke or injury. 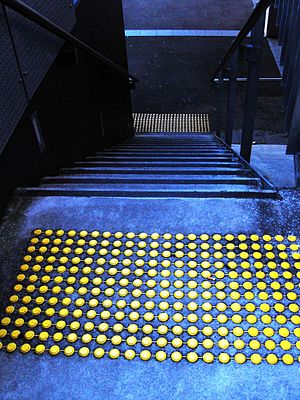 The somatosensory system is spread through all major parts of a mammal's body (and other vertebrates). It consists both of sensory receptors and sensory (afferent) neurons in the periphery (skin, muscle and organs for example), to deeper neurons within the central nervous system.

A somatosensory pathway will typically have three long neurons:[3] primary, secondary and tertiary (or first, second, and third). 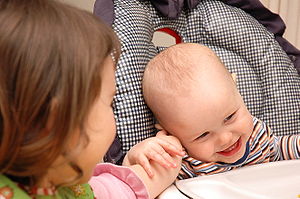 Touch can result in many different physiological reactions. Here, a baby laughs at being tickled by an older sister.

The tactile feedback from proprioception is derived from the proprioceptors in the skin, muscles, and joints.[5]

The receptor for the sense of balance resides in the vestibular system in the ear (for the three-dimensional orientation of the head, and by inference, the rest of the body). Balance is also mediated by the kinesthetic reflex fed by proprioception (which senses the relative location of the rest of the body to the head).[6] In addition, proprioception estimates the location of objects which are sensed by the visual system (which provides confirmation of the place of those objects relative to the body), as input to the mechanical reflexes of the body.

File:Sensory Homunculus.png
The cortical homunculus, a map of somatosensory areas of the brain, was devised by Wilder Penfield.

Fine touch (or discriminative touch) is a sensory modality that allows a subject to sense and localize touch. The form of touch where localization is not possible is known as crude touch. The posterior column–medial lemniscus pathway is the pathway responsible for the sending of fine touch information to the cerebral cortex of the brain.

Crude touch (or non-discriminative touch) is a sensory modality that allows the subject to sense that something has touched them, without being able to localize where they were touched (contrasting "fine touch"). Its fibres are carried in the spinothalamic tract, unlike the fine touch, which is carried in the dorsal column.

As fine touch normally works in parallel to crude touch, a person will be able to localize touch until fibres carrying fine touch (Posterior column–medial lemniscus pathway) have been disrupted. Then the subject will feel the touch, but be unable to identify where they were touched.

This diagram linearly (unless otherwise mentioned) tracks the projections of all known structures that allow for touch to their relevant endpoints in the human brain.

The 4 skin receptors each respond to different stimuli for short or long periods.

Merkel nerve endings are found in the basal epidermis and hair follicles; they react to low vibrations (5–15 Hz) and deep static touch such as shapes and edges. Due to a small receptive field (extremely detailed info) they are used in areas like fingertips the most; they are not covered (shelled) and thus respond to pressures over long periods.

Meissner’s corpuscles react to moderate vibration (10–50 Hz) and light touch. They are located in the dermal papillae; due to their reactivity they are primarily located in fingertips and lips. They respond in quick action potentials, unlike Merkel. They are responsible for the ability to read Braille and feel gentle stimuli.

Pacinian corpuscles determine gross touch and distinguish rough and soft substances. They react in quick action potentials, especially to vibrations around 250 Hz (even up to centimeters away). They are the most sensitive to vibrations, and have large receptor fields. Pacinian reacts only to sudden stimuli so pressures like clothes that are always compressing their shape are quickly ignored.

Ruffini corpuscles react slowly and respond to sustained skin stretch. They are responsible for the feeling of object slippage and play a major role in the kinesthetic sense and control of finger position and movement. Merkel and ruffini (slow-response) are myelinated; the rest (fast-response) are not. Merkel, pacinian, ruffini and meissner are all activated upon pressures that squish their shape causing an action potential.[21][22][23][24][25][26][27]

All afferent touch/vibration info ascends the spinal cord via the posterior (dorsal) column-medial lemniscus pathway via gracilis (T7 and below) or cuteatus (T6 and above).

Cuteatus sends signals to the cochlear nucleus indirectly via spinal grey matter, this info is used in determining if a perceived sound is just villi noise/irritation. All fibers cross (left becomes right) in the medulla.

The postcentral gyrus includes the primary somatosensory cortex (Brodmann area 3), and BA2. They are collectively referred to as S1.

BA3 receives the densest projections from the thalamus. BA3a is involved with the sense of relative position of neighboring body parts and amount of effort being used during movement. BA3b is responsible for distributing somato info, it projects texture info to BA1 and shape + size info to BA2.

Region S2 (secondary somatosensory cortex) divides into Area S2 and parietal ventral area. Area S2 is involved with specific touch perception and is thus integrally linked with the amygdala and hippocampus to encode and reinforce memories.

The insular cortex plays a role in the sense of bodily-ownership, bodily self-awareness, and perception. Insula also plays a role in conveying info about sensual touch, pain, temperature, itch, and local oxygen status. Insula is a highly connected relay and thus is involved in numerous functions.

This may present as numbness or paresthesia.

Certain types of seizures are associated with the somatosensory system. Cortical injury may lead to loss of thermal sensation or the ability to discriminate pain. An aura involving thermal and painful sensations is a phenomenon known to precede the onset of an epileptic seizure or focal seizure. Another type of seizure, called a sensory Jacksonian seizure involves an abnormal, localizable, cutaneous sensation but does not have apparent stimulus. This sensation may progress along a limb or to adjacent cutaneous body areas, reflecting abnormal neuronal firing in the postcentral gyrus where an epileptic discharge is propagated. These episodes in which patients are consciously aware during a seizure have been useful for identifying problems associated with the somatosensory cortex. Patients can describe the nature of the seizure and how they feel during it.[34]

The absence of proprioception or two-point tactile discrimination on one side of the body suggests injury to the contralateral side of the primary somatosensory cortex. However, depending on the extent of the injury, damage can range in loss of proprioception of an individual limb or the entire body. A deficit known as cortical astereognosis of the receptive type describes an inability to make use of tactile sensory information for identifying objects placed in the hand. For example, if this type of injury effects the hand region in the primary somatosensory cortex for one cerebral hemisphere, a patient with closed eyes cannot perceive the position of the fingers on the contralateral hand and will not be able to identify objects such as keys or a cell phone if they are placed into that hand.[34]

Haptic technology can provide touch sensation in virtual and real environments.[35] In the field of speech therapy, tactile feedback can be used to treat speech disorders.