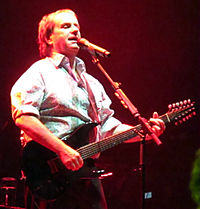 A songwriter is an individual who writes the lyrics, melodies and chord progressions for songs, typically for a popular music genre such as pop music or country music. A songwriter can also be called a composer, although the latter term tends to be mainly used for individuals from the classical music genre. The pressure from the music industry to produce popular hits means that songwriting is often an activity for which the task are distributed between a number of people.[1] For example, a songwriter who excels at writing lyrics might be paired with a songwriter with a gift for creating original melodies. Pop songs may be written by group members from the band or by staff writers: songwriters directly employed by music publishers.[1] Some songwriters serve as their own music publishers, while others have outside publishers.[1] In the 2010s, songwriters are no longer dependent on labels to support their music. Technology has advanced to the point where songwriters can record at home with a laptop and a good-quality microphone.

The old-style apprenticeship approach to learning how to write songs is being supplemented by university degrees and college diplomas and "rock schools."[1] A knowledge of modern music technology (sequencers, synthesizers, computer sound editing), songwriting elements, and business skills are necessary requirements to make a songwriting career. Several music colleges offer songwriting diplomas and degrees with music business modules.[1] Since songwriting and publishing royalties can be a substantial source of income, particularly if a song becomes a hit record, legally, in the US, songs written after 1934 may only be copied by the authors. The legal power to grant these permissions may be bought, sold or transferred. This is governed by international copyright law.[1]

Professional songwriters can either be employed to write either the lyrics or the music directly for or alongside a performing artist, or they present songs to A&R, publishers, agents and managers for consideration. Song pitching can be done on a songwriter's behalf by their publisher or independently using tip sheets like RowFax, the MusicRow publication, and SongQuarters.[1] Skills associated with song-writing include entrepreneurism and creativity.[2]

Songwriters who sign an exclusive songwriting agreement with a publisher are called staff writers. Being a staff writer effectively means that during the term of the songwriter's contract with the publisher, all their songs are automatically published by that company, and can not be published elsewhere.[1]

In the Nashville country music scene, there is a strong staff writer culture where contracted writers work normal "9-to-5" hours at the publishing office and are paid a regular salary. This salary is in effect the writer's 'draw', an advance for future earnings paid on a monthly basis which enables them to budget a livelihood with it.[3] The publisher owns the copyright of songs written during the term of the agreement for a designated period, after which the songwriter can reclaim the copyright.[3] In an interview with HitQuarters, songwriter Dave Berg extolled the benefits of the set-up: "I was able to concentrate on writing the whole time and have always had enough money to live on."[4]

Unlike contracted writers, some staff writers operate as employees for their respective publishers. Under the terms of these work for hire agreements, the compositions created under the term of the agreement are fully owned by the publisher. Because the recapture provision of the United States Copyright Act of 1976 does not apply to "works made for hire," the rights to a song created under an employment contract can not be "recaptured" by the writer after 35–40 years. In Nashville, young writers are often strongly encouraged to avoid these types of contracts.

Staff writers are common across the whole industry, but without the more office-like working arrangements favored in Nashville. All the major publishers employ writers under contract.[4] A staff writer contract with a publisher can be a first step for any professional songwriting career, with some writers outgrowing the set-up once they achieve a degree of success and a desire for greater independence.[4] Songwriter Allan Eshuijs described his staff writer contract at Universal Music Publishing as a starter deal. His success under the arrangement eventually allowed him to found his own publishing company so that he could "...keep as much [publishing income] as possible and say how it’s going to be done."[5]

Songwriters are also often skilled musicians. In part, this is because the process of "working out" a song or arrangement requires a songwriter to play an instrument, typically the guitar or the piano. In addition to selling their songs and musical concepts for other artists to sing, some songwriter musicians create songs to perform themselves. Songwriters need to create a number of elements for a song. At minimum, a songwriter must prepare a lead sheet for a song, which consists of one or more pieces of sheet music with the melody notes and chord progression indicated on it.

The songwriter may expand upon the melody and chord progression by adding an instrumental melody (which may occur before or after the vocal melody, or alongside the vocal melody) and creating a more complex song structure (e.g., verse, chorus, bridge, instrumental solo section, verse, etc.).

When a song is written by more than one person, it is co-written, or written jointly or in collaboration with another author.[6] A quick look inside a room where co-writing is being practiced — two or more creative minds are throwing out every single line or word or rhyme that comes to them, and not holding any thought back. They’re writing, creating, constructing the song, and not simply talking about writing the song. Co-writing is looked upon as the joining of ideas and minds to create a work that, if written alone, may not have stood out quite as much.[7] The first step in co-writing is to establish the division of the contribution between co-writers. In copyright law, there is no distinction of importance between the lyrics of the song or the melody of the song, therefore each writer is given ownership equally over 100 percent of every aspect of the song, unless another agreement is arranged.[8] "Phantom" songwriters are those who provided contribution to the song that was incredibly small or nonexistent. Unfortunately, once a songwriter is acknowledged as a cowriter on the project, this is almost impossible to undo, so "phantom" songwriters are not usually given credit from well-known writers trying to make the most profit they can off of their copy-written work.[9]