South Bohemia (Czech: Jihočeský kraj) is an administrative unit (kraj) of the Czech Republic, located mostly in the southern part of its historical land of Bohemia, with a small part in southwestern Moravia. The western part of the South Bohemian Region is former Prachens (Prácheňsko), a huge archaic region with distinctive features with its capital, Písek. In 2011, there were 623 municipalities in the region, whereof 54 had a status of town. 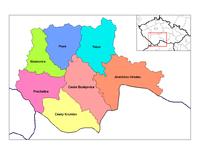 Thanks to its geographical location and natural conditions the region belongs to the areas where the first settlements began to appear in the distant past. In the past centuries, the South Bohemia was famous for fishpond cultivation and forestry. The region has been industrialized since the beginning of the twentieth century. Nowadays, it is an attractive destination due to its natural and culturally historical richness. The travel industry has been recently the fastest growing industry in the region.[1]

The region was established based on the constitutional lax No. 347/97 of Collections concerning the formation of higher territorial administrative units. The region and its authorities are specified by Act No. 129-2000 of Collections concerning regions, which came into effect on the day of the regional authorities elections, or on January 1, 2001.[2]

In 2011, the average age in the region is 41.2 years. Approximately 11% of inhabitants who were 15 years or older had a university degree (in 2001 this was 8%). According to 2011 census, 20.6% of inhabitants in the region believe in god (however, almost half of the people did not answer this question). The table below gives an overview of town and cities in the region that have more than 8,000 inhabitants. 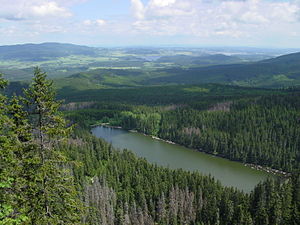 The region is located in the drainage basin of Vltava river. Other significant rivers are Malše, Lužnice, Otava, Nežárka and Lomnice. South Bohemia is famous for its countless ponds. In the past, more than seven thousand ponds were established across the region. With its 489 ha Rožmberk is the largest one, followed by Bezdrev (450 ha) and Horusice pond (415 ha). In the 20th century, a series of dams was constructed on Vltava river. Lipno Dam is the largest dam in the Czech Republic and has area of 4,870ha. Other dams in the region are Orlík Dam, Římov Dam and Hněvkovice Dam.[4]

A big part of the Šumava National Park is situated in South Bohemia. The Bohemian Forest is a popular holiday destination because it is excellent hiking country. Most interesting natural and cultural sights are connected with more than 500 km of summer marked trails and many bike trails.

The climate in South Bohemia is of a transitional Central European type. It is affected alternatively by an oceanic influence from the west, and a continental influence from the east. Therefore the weather can be variable. Most of the South Bohemian region belongs to the mild, warm and wet zone and at altitudes above 750 m this passes to mild and cool. The warmest month is usually July, with temperatures averaging between 17 and 18 °C in valley areas. In higher localities (over 900 m) the temperatures can drop below 14 °C. Days with temperatures above 25 °C are most frequently in valley-basins, and the area around the confluence of the rivers Lužnice and Vltava (Moldau): on average there are 40-50 such days a year.[5]

500ml bottle of Budweiser Budvar, as marketed in the UK

The Region does not rank among key industrial areas of the Czech Republic. The industrial production is concentrated particularly in the area of České Budějovice and in Tábor District and Strakonice District. Food and drink processing industries plays a significant role in the region. Other important sectors are the automotive industry, production of machinery and appliances, and also the textile and clothing industries. Recently, the travel industry has become an important sector in the region.

The Czech Academy of Sciences, whose institutes operate all over the region, provides a good base for the development of science. These institutes focus mostly on biology and ecology. Scientific work is also part of the activities of the University of South Bohemia (Czech: Jihočeská univerzita) with its headquarters in České Budějovice and Jindřichův Hradec.

Approximately 11% of the national agricultural production is produced in the South Bohemian Region. The agricultural sector focuses on plant production, mostly on growing cereals, oil plants and potatoes. In animal husbandry, the breeding of cattle and pigs prevails. Fishpond cultivation has a long tradition in South Bohemia. Fish husbandry in the total area of 25 000 ha makes up about 50% of the total national production.[6]

The region is famous for its small villages with a pond in the middle. These are generally built in the style of the Rustic Baroque, also known as South Bohemian Baroque:

"Rustic Baroque is a term for the unique architecture of South Bohemia. The local folk bricklayer masters Martin Paták and František Šoch created a new type of South Bohemian farmhouse with an ornate frontispiece in the middle of the 19th century. A typical building of this style is a massive rustic farmhouse with two richly decorated frontispieces, which are joined by an arched gate with small doors. The marshland frontispieces are beautifully decorated, they have lavish contours, the surface is usually divided by allusive decorative columns, completed by arches, stylised hearts, four-leafed clovers, meadow flowers."