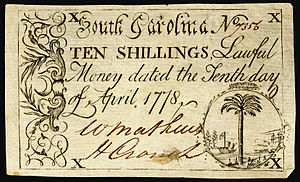 The pound was the currency of South Carolina until 1793. Initially, the British pound circulated, supplemented from 1703 by local paper money.[1] Although these notes were denominated in pounds, shillings and pence, they were worth less than sterling, with 1 South Carolina shilling = 8 pence sterling. The first issues were known as "Proclamation Money". They were replaced by the "Lawful Money" issue in 1748, with 1 Lawful shilling = 4⅔ Proclamation shillings.