From Infogalactic: the planetary knowledge core
Jump to: navigation, search
This article is about the company that commenced operations in April 2006. For the previous operator, see South Eastern Trains.

London & South Eastern Railway Limited, trading as Southeastern, is a British train operating company in South East England. It provides the majority of commuter/regional routes in South East London and Kent as well as some parts of East Sussex along three main routes: the Southeastern Main Line from London Cannon Street and London Charing Cross to Dover via Sevenoaks and the Chatham Main Line between London Victoria and Dover/Ramsgate via the Medway towns. Southeastern also provides services along High Speed 1 from London St. Pancras. On 1 April 2006 it became the franchisee for the new Integrated Kent franchise (IKF), replacing the publicly owned South Eastern Trains on the former South Eastern franchise.

Southeastern serves the main London stations of Charing Cross, Victoria, Blackfriars, Cannon Street, London Bridge, Waterloo East and St Pancras. The Southeastern network has a route mileage of 540, with 179 stations. About 70% of its services run to and from London.[3]

It is owned by Govia, a joint venture between Go-Ahead Group and Keolis, which also operates the neighbouring Southern franchise, which overlaps with Southeastern in some areas. The company's formal name, under which it mounted its bid for the franchise, is London and South Eastern Railway (LSER).

History of the franchise

Since the privatisation of British Rail, the franchise to run trains in this area has been held by three different companies. The first company to win the South Eastern franchise, on 14 October 1996, was Connex, which operated it under the name Connex South Eastern. Connex gained a reputation for unreliable services, but it was for "poor financial management" that its franchise was cut short by the Strategic Rail Authority (SRA) on 9 November 2003.[4] Train services were then taken over by South Eastern Trains, a wholly owned subsidiary of the SRA/Department for Transport created for the purpose, until bidding for a new franchise was due. This would see the existing South Eastern franchise combined with the new high-speed services to be operated on High Speed 1 (formerly known as the Channel Tunnel Rail Link) to form a new Integrated Kent Franchise (IKF).[5]

The opening of the second phase of High Speed 1 in November 2007 made available train paths on the traditional network previously used by Eurostar, allowing Southeastern to increase certain services in December 2007.[6] In December 2008, as part of the franchise agreement, responsibility for the Redhill to Tonbridge Line was handed over to Southern. Southeastern high-speed services began full operations on 14 December 2009.[7]

In March 2009 the bay platforms at London Blackfriars closed for reconstruction as part of the Thameslink Programme. Southeastern services previously terminating at Blackfriars, mostly from Sevenoaks via the Catford loop, were extended to Kentish Town, St Albans, Luton or Bedford.[8] As a result of this change, Southeastern now operates these services jointly with Thameslink using 20 dual-voltage Class 319 sets (which remain in FCC livery) as well as newly built Class 377 Electrostars.[9] When the station fully reopened with new bay platforms in May 2012 these services continued to run, but in the evening and at weekend (when the station had been closed) instead of terminating at Victoria services now terminate at Blackfriars.[10]

Following the Department for Transport's review after the cancellation of the InterCity West Coast franchise process, extensions were granted to the franchises due for renewal in the near future. In 2013, the coalition government extended Southeastern's franchise, without competitive tender, from 31 March 2014 to June 2018.[2] 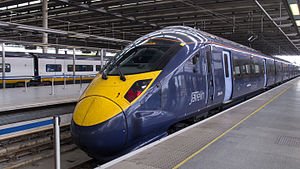 Announced as part of the successful London 2012 Olympic bid, it was an integral part of a plan to improve public transport in London in readiness for the Olympics, an area of the bid that was initially regarded as being poor by the International Olympic Committee (IOC).[citation needed] The British Olympic Association applied to register Javelin as a UK trademark on 19 July 2005 and this was granted on 2 June 2006.[16] The service was operated by Southeastern on High Speed 1 using the fleet of Class 395 trains, and because of this the class is sometimes referred to as the Javelin.[17][18]

At St Pancras there is interchange with the Underground and with trains to/from the Midlands, Scotland, and the North of England. For track capacity reasons, Eurostar trains, which have never called at Stratford, did not do so during the games.[14] It was expected that over 80% of Olympic spectators would travel to and from the venues by rail. Services to the Olympic Park were planned to offer a total capacity of 240,000 travellers per hour, some 25,000 of whom were expected to use the Javelin service. 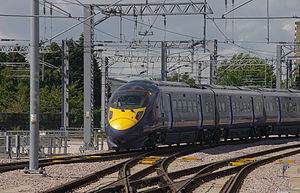 Southeastern[19] introduced a full timetable of domestic high-speed services branded Southeastern Highspeed over High Speed 1 between London St Pancras and Ashford International on 13 December 2009; a limited preview service had been running since 29 June 2009. High-speed trains use High Speed 1 calling at Stratford International and Ebbsfleet International. Trains from London to the Medway towns and Faversham leave the high-speed line at Ebbsfleet and continue via the North Kent line and Chatham Main Line. Trains for Dover Priory and Margate leave the high-speed line at Ashford International. A limited peak-hour service now also operates between St Pancras and Maidstone West via Ebbsfleet and Strood.

When bidding for the franchise, Southeastern made a point of advertising part-owner SNCF's experience operating integrated high-speed train services on the French TGV network.[20] A fleet of 29 six-coach Shinkansen-derived high-speed 'A-trains' were built in Japan by Hitachi for this route.[21] Known as Class 395, this was Hitachi's first train sale in Britain. The colour scheme for the high-speed trains is dark blue. The services are marketed as Southeastern Highspeed, and some of the trains are named after British Olympians such as Steve Redgrave and Ben Ainslie.[22][23] 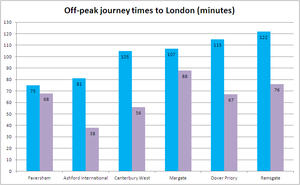 At the same time there was the largest change to the timetable in the area in 40 years. With the fast trains now travelling over High Speed 1, the Charing Cross to Ashford stopping service was extended to Dover, Canterbury and Ramsgate.

Fares for journeys that include the High Speed 1 section of line (between St Pancras International and Gravesend) generally include a surcharge. 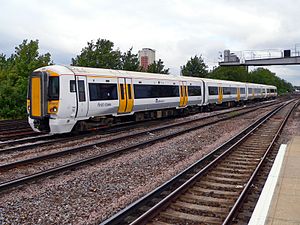 Southeastern[24] is the key operator for Kent, and also serves East Sussex. 'Mainline' services connect central London with Dover, Folkestone, Hastings, Royal Tunbridge Wells, Ramsgate, Chatham, Maidstone and Canterbury. The backbone fleet on these services is the Class 375 Electrostar, although the Class 465/9 Networker is also used on occasion.

In December 2009 Southeastern saw 'Highspeed' trains stopping at 'Mainline' stations, and some longer timings on 'Mainline' services as trains called at more stations. Services to Tonbridge were maintained at six trains per hour off-peak, two per hour going forward to Ashford and beyond, two per hour to Hastings, and two per hour terminating at Tunbridge Wells. With high-speed services reaching Faversham, the half-hourly Victoria to Faversham stopping service was replaced with an hourly service to Gillingham and additional stops on the "fast" services to London Victoria. On the Maidstone East Line, services from London Cannon Street to Ashford International via Maidstone East and from London Victoria to Maidstone East and to Canterbury West via Ashford were replaced by a half-hourly Victoria to Ashford service. The Strood to Paddock Wood service was extended to Tonbridge. The Sittingbourne to Sheerness on Sea Branch Line also comes under 'Mainline' services,[citation needed] but is mainly operated by Class 466 Networkers. 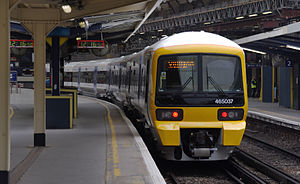 Services that operate during peak times only include:
(* tpd): trains per day

Oyster cards are now valid from all Zone 1–6 stations served by the company, including journeys on High Speed 1 between St Pancras International and Stratford International albeit at a special pay-as-you-go fare. Travelcards (including on Oyster) are however not valid on High Speed services only.

In late 2010 the company faced a barrage of criticism for its performance during extreme weather conditions in the south-east of England[28] and there are also allegations that Southeastern deliberately runs reduced services to skew its official performance figures.[29]

In 2014 a survey of UK rail passenger satisfaction showed Southeastern to be the lowest rated train operating company, with just forty percent of passengers believing that a good service is provided and a rating of only one out of five for value for money. Southeastern claimed that the reason for this is that people dislike going to work and that if the survey were to be retaken on a "sunny summer's day" the outcome would be better for the company.[30]

However, in a survey (Best and worst UK train companies) carried out in February 2015 by Which? magazine, Southeastern continued to rank poorly, being rated as the second worst UK train operating train companies, with a customer score of just 44%. This was narrowly ahead of Thameslink and Great Northern, with 43%. Southeastern also achieved only 2/5 or 3/5 star ratings across the six specific categories assessed in the survey (such categories included Punctuality, Reliability and Cleanliness of toilets).[31]

Southeastern operates a fleet of about 367 trains, all of which are electric multiple units.

The transfer of some routes to Southern and Thameslink has allowed Southeastern to withdraw its small fleet of Class 508 EMUs and replace them with Networker stock cascaded from other services.

Southeastern are expected to receive 25 Class 377 units in coming years according to Department for Transport documents published in September 2013, relating to the new combined Thameslink, Southern and Great Northern Franchise.[32] It has been announced that they will enter service with Southeastern in late 2017 [33]