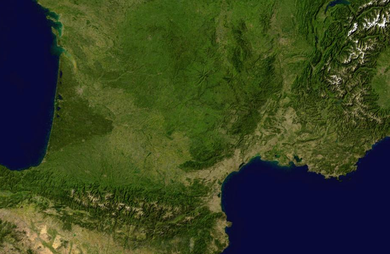 Southern France or the south of France, colloquially known as le Midi,[1][2] is a defined geographical area consisting of the regions of France that border the Atlantic Ocean south of the Marais Poitevin,[3] Spain, the Mediterranean, and Italy. The Midi includes:[4]

This area corresponds in large part to Occitania, the territory in which Occitan (French: langue d'oc) — as distinct from the langues d'oïl of northern France — was historically the dominant language. Though part of Occitania, the regions of Auvergne and Limousin are not normally considered part of the south of France.

The term Midi derives from mi (middle) and di (day) in Old French, comparable to the term Mezzogiorno from the south of Italy. The time of midday was synonymous with the direction of south because in France, as in all of the Northern Hemisphere north of the Tropic of Cancer, the sun is in the south at noon. The synonymy existed in Middle French as well, where meridien can refer to both midday and south.

The Midi is considered to start at Valence, hence the saying "à Valence le Midi commence".

Films set in the South of France