Spanish colonization of the Americas

Colonial expansion under the crown of Castile was initiated by the Spanish conquistadores and developed by the Monarchy of Spain through its administrators and missionaries. The motivations for colonial expansion were trade and the spread of the Catholic faith through indigenous conversions.

Beginning with the 1492 arrival of Christopher Columbus and continuing for over three centuries, the Spanish Empire would expand across half of South America, most of Central America and the Caribbean Islands, and much of North America (including present day Mexico, Florida and the Southwestern and Pacific Coastal regions of the United States).

In the early 19th century, the Spanish American wars of independence resulted in the emancipation of most Spanish colonies in the Americas, except for Cuba and Puerto Rico, which were finally given up in 1898, following the Spanish–American War, together with Guam and the Philippines in the Pacific. Spain's loss of these last territories politically ended the Spanish colonization in the Americas.

Iberian territory of Crown of Castile.

The Catholic Monarchs Isabella of Castile, Queen of Castile and her husband King Ferdinand, King of Aragon, pursued a policy of joint rule of their kingdoms and created a single Spanish monarchy. Even though Castile and Aragon were ruled jointly by their respective monarchs, they remained separate kingdoms. The Catholic Monarchs gave official approval for the plans of Genoese mariner Christopher Columbus for a voyage to reach India by sailing West. The funding came from the queen of Castile, so the profits from Spanish expedition flowed to Castile. In the extension of Spanish sovereignty to its overseas territories, authority for expeditions of discovery, conquest, and settlement resided in the monarchy.[1]

Columbus made four voyages to the West Indies as the monarchs granted Columbus the governorship of the new territories, and financed more of his trans-Atlantic journeys. He founded La Navidad on the island of Hispaniola (now divided into Haiti and the Dominican Republic), in what is present day Haiti on his first voyage. After its destruction by the indigenous Taino people, the town of Isabella was begun in 1493, on his second voyage. In 1496 his brother, Bartholomew, founded Santo Domingo. By 1500, despite a high death rate, there were between 300 and 1000 Spanish settled in the area. The local Taíno people continued to resist, refusing to plant crops and abandoning their Spanish-occupied villages. The first mainland explorations were followed by a phase of inland expeditions and conquest. In 1500 the city of Nueva Cádiz was founded on the island of Cubagua, Venezuela, and it was followed by the founding by Alonso de Ojeda of Santa Cruz in present-day Guajira peninsula. Cumaná in Venezuela was the first permanent settlement founded by Europeans in the mainland Americas,[2] in 1501 by Franciscan friars, but due to successful attacks by the indigenous people, it had to be refounded several times, until Diego Hernández de Serpa's foundation in 1569. The Spanish founded San Sebastian de Uraba in 1509 but abandoned it within the year. There is indirect evidence that the first permanent Spanish mainland settlement established in the Americas was Santa María la Antigua del Darién.[3]

The Spanish conquest of the Aztec empire was led by Hernán Cortés. The victory over the Aztecs was relatively quick, from 1519 to 1521, and aided by his Tlaxcala and other allies from indigenous city-states or altepetl. These polities allied against the Aztec empire, to which they paid tribute following conquest or threat of conquest, leaving the city-states' political hierarchy and social structure in place.

The Spanish conquest of Yucatán was a much longer campaign, from 1551 to 1697, against the Maya peoples in the Yucatán Peninsula of present-day Mexico and northern Central America. When Hernán Cortés landed ashore at present day Veracruz and founded the Spanish city there on April 22, 1519, marks the beginning of 300 years of Spanish hegemony over the region. The assertion of royal control over the Kingdom of New Spain and the initial Spanish conquerors took over a decade, with importance of the region meriting the creation of the Viceroyalty of New Spain was established by Charles V in 1535 with the appointment of Don Antonio de Mendoza as the first viceroy.

Spain had control of California through the Spanish missions in California till the Mexican secularization act of 1833. 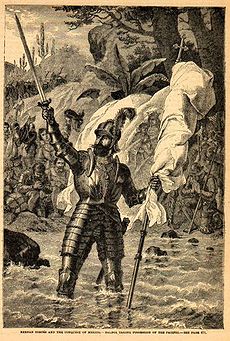 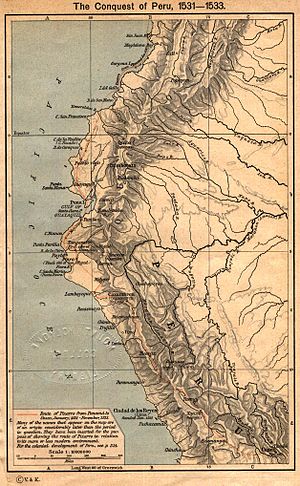 Map depicting the route of Pizarro from Panama to Cuzco

In 1532 at the Battle of Cajamarca a group of Spaniards under Francisco Pizarro and their indigenous Andean Indian auxiliaries native allies ambushed and captured the Emperor Atahualpa of the Inca Empire. It was the first step in a long campaign that took decades of fighting to subdue the mightiest empire in the Americas. In the following years Spain extended its rule over the Empire of the Inca civilization.

The Spanish took advantage of a recent civil war between the factions of the two brothers Emperor Atahualpa and Huáscar, and the enmity of indigenous nations the Incas had subjugated, such as the Huancas, Chachapoyas, and Cañaris. In the following years the conquistadors and indigenous allies extended control over Greater Andes Region. The Viceroyalty of Perú was established in 1542. The last Inca stronghold was conquered by the Spanish in 1572.

Between 1537 and 1543, six Spanish expeditions entered highland Colombia, conquered the Muisca Indians, and set up the New Kingdom of Granada (Spanish: Nuevo Reino de Granada). Gonzalo Jiménez de Quesada was the leading conquistador.[7] It was governed by the president of the Audiencia of Bogotá, and comprised an area corresponding mainly to modern-day Colombia and parts of Venezuela. The conquistadors originally organized it as a captaincy general within the Viceroyalty of Peru. The crown established the audiencia in 1549. Ultimately the kingdom became part of the Viceroyalty of New Granada first in 1717 and permanently in 1739. After several attempts to set up independent states in the 1810s, the kingdom and the viceroyalty ceased to exist altogether in 1819 with the establishment of Gran Colombia.[8]

This evolved from the Council of the Indies and Viceroyalties into an Intendant system, raise more revenue and promote greater efficiency. 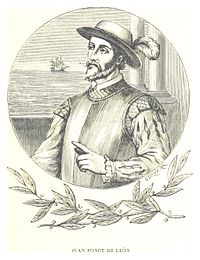 During the Napoleonic Peninsular War in Europe between France and Spain, assemblies called juntas were established to rule in the name of Ferdinand VII of Spain. The Libertadores (Spanish and Portuguese for "Liberators") were the principal leaders of the Spanish American wars of independence. They were predominantly criollos (Americas-born people of European ancestry, mostly Spanish or Portuguese), bourgeois and influenced by liberalism and in some cases with military training in the mother country.

In 1809 the first declarations of independence from Spanish rule occurred in the Viceroyalty of New Granada. The first two were in present-day Bolivia at Sucre (May 25), and La Paz (July 16); and the third in present-day Ecuador at Quito (August 10). In 1810 Mexico declared independence, with the Mexican War of Independence following for over a decade. In 1821 Treaty of Córdoba established Mexican independence from Spain and concluded the War. The Plan of Iguala was part of the peace treaty to establish a constitutional foundation for an independent Mexico.

It has been estimated that in the 16th century about 240,000 Spaniards emigrated to the Americas, and in the 17th century about 500,000, predominantly to Mexico and Peru.[9][not in citation given]

Before the arrival of Columbus, in Hispaniola the indigenous Taíno pre-contact population of several hundred thousand declined to sixty thousand by 1509. Although population estimates vary, Dominican friar Bartolomé de las Casas, the "Defender of the Indians" estimated there were 6 million (6,000,000) Taíno and Arawak in the Caribbean at the time of Columbus's arrival in 1492.[citation needed]

Of the history of the indigenous population of California, Sherburne F. Cook (1896–1974) was the most painstakingly careful researcher. From decades of research he made estimates for the pre-contact population and the history of demographic decline during the Spanish and post-Spanish periods. According to Cook, the indigenous Californian population at first contact, in 1769, was about 310,000 and had dropped to 25,000 by 1910. The vast majority of the decline happened after the Spanish period, in the Mexican and US periods of Californian history (1821–1910), with the most dramatic collapse (200,000 to 25,000) occurring in the US period (1846–1910).[10][11][12]

The Spaniards were committed, by Royal decree, to convert their New World indigenous subjects to Catholicism. However, often initial efforts were questionably successful, as the indigenous people added Catholicism into their longstanding traditional ceremonies and beliefs. The many native expressions, forms, practices, and items of art could be considered idolatry and prohibited or destroyed by Spanish missionaries, military and civilians. This included religious items, sculptures and jewelry made of gold or silver, which were melted down before shipment to Spain.

Though the Spanish did not force their language to the extent they did their religion, some indigenous languages of the Americas evolved into replacement with Spanish.