From Infogalactic: the planetary knowledge core
Jump to: navigation, search
For other uses, see SBS.

In 1975, concerns that minority communities might require details in their own languages of the new Medibank health care scheme (renamed Medicare in 1984) led to the establishment of two ethnic-minority radio stations, 2EA in Sydney and 3EA in Melbourne. These started broadcasting in June 1975, with pre-recorded messages in seven and eight foreign languages, respectively.

The following year, the Federal Government formed the Consultative Committee on Ethnic Broadcasting. Following the recommendation of this and subsequent committees, the Broadcasting and Television Act 1942 was amended to found the Special Broadcasting Service. This legislation came into force on 1 January 1978, with the new broadcaster taking responsibility for 2EA and 3EA.[2]

SBS TV began test transmissions in April 1979 when it showed various foreign language programs on ABV-2 Melbourne and ABN-2 Sydney on Sunday mornings. Full-time transmission began at 6:30 p.m. on 24 October 1980 (United Nations Day), as Channel 0/28. The first program shown was a documentary entitled 'Who are we?', which was hosted by veteran news man Peter Luck. At the time, SBS was broadcasting on UHF Channel 28 and VHF Channel 0, with a planned discontinuation of the latter at some time in the future. Bruce Gyngell, who introduced television to Australia back in 1956, was given the task of introducing the first batch of programs on the new station.

On 14 October 1983, the service expanded into Canberra, Cooma, and Goulburn and, at the same time, changed its name to Network 0–28. Its new slogan was the long-running "Bringing the World Back Home". The network changed its name to SBS on 18 February 1985, and began daytime transmissions. SBS expanded to Brisbane, Adelaide, Newcastle, Wollongong, and the Gold Coast in the June of that year.

On 5 January 1986, SBS ceased broadcasting on the VHF channel 0 frequency. Although many Australians at the time did not have UHF antennas, SBS's VHF licence had already been extended by a year at this stage, and not all antennas had worked well with the low-frequency Channel 0 either.[3]

In August 1986, the government proposed legislation that would merge SBS into the ABC. This was highly unpopular with ethnic-minority communities, leading Prime Minister Bob Hawke to announce in 1987 that the proposed amalgamation would not proceed. The SBS Radio and Television Youth Orchestra was launched in 1988 with founding conductor Matthew Krel.

Plans to introduce limited commercial-program sponsorship, and the establishment of SBS as an independent corporation with its own Charter, were put in place in July 1989. Eat Carpet, showcasing local and international short films, was also launched in 1989. The proclamation of the Special Broadcasting Service Act 1991 officially made SBS a corporation in 1991. Throughout the early 1990s, SBS TV coverage was expanded further to include new areas such as the Latrobe Valley, Spencer Gulf, Darwin, northeast Tasmania, Cairns and Townsville. 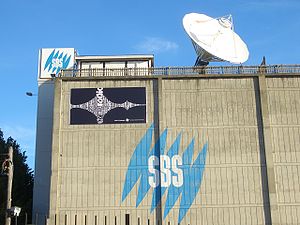 In 1992, SBS's radio and television facilities were gradually moved to new headquarters in Artarmon, New South Wales, from their original studios at Bondi Junction (radio) and Milsons Point (television). The new building was officially opened on the 10 November 1993 by Prime Minister Paul Keating. A national radio network was launched in January 1994. The new service initially covered Brisbane, Adelaide, Perth and Darwin, while original stations 2EA and 3EA were renamed Radio Sydney and Radio Melbourne, respectively. The new national service was launched on a separate frequency in Sydney and Melbourne in July of that year. Throughout 1996, radio services were expanded to cover Hobart and Canberra, while SBS TV's coverage was further expanded to include the New South Wales North Coast and Albury.

South Park, SBS's most successful television series, was first shown in 1997. A time-delay system was installed for South Australia in May 1999, shortly before the establishment of the Transmission Services division (intended to manage transmission and self-help services). A New Media division, responsible for the SBS website, was established at the start of 2000, in time for the first webcast of the AFI Awards. Ratings continued to increase through 2000 to 2001 – increasing to an overall 5.2% average weekly audience share.[2]

SBS Radio dropped four languages, and added four others, in April 2003, while increasing the broadcast hours for Cantonese, Mandarin, and Arabic. SBS broadcast the 2004 Athens Olympics in partnership with the Seven Network. SBS broadcast the Euro 2008 in Austria and Switzerland. 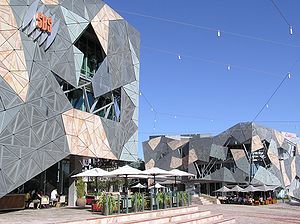 Tagalog, Vietnamese, and Arabic language broadcasts were added to SBS's WorldWatch television schedule in 2003.[4] The Vietnamese community protested the Vietnamese-language service, which was just taken from VTV4, Vietnam's government-controlled the national broadcaster. They found the portrayal of the communist Vietnamese flag and Ho Chi Minh offensive, and the Vietnamese Community of Australia stated that its lack of reporting on political arrests and religious oppression were also offensive, especially to those who had fled the country following the Vietnam War.[5] This backlash prompted SBS to display disclaimers before all externally produced bulletins distancing the it from the content.

In May 2008, SBS unveiled a new-look logo, as well as a new backronymic slogan: Six Billion Stories and counting.[6]

On 8 May 2012, SBS received $158 million in government funding,[7] of which $15 million would be used yearly, to fund the formation of a new free-to-air channel devoted to the indigenous peoples of Australia.[8] which would replace the existing National Indigenous Television on 12 December 2012, with 90% of its staff transferring to this new channel.[9] On 12 December 2012, NITV was re-launched as an SBS-operated free-to-air channel, replacing SBS4.[10]

SBS is a supporter of Marriage Equality[11] and pulled an anti-marriage equality ad ahead of its telecast of the Sydney Gay and Lesbian Mardi Gras.[12] Managing Director Michael Ebeid has defended the SBS position.[11]

On 17 November 2015, the new food channel Food Network was launched.

Regardless of state or territory, SBS television services always use the callsign "SBS". On 14 December 2006, SBS announced its intention to change to 720p as its high-definition transmission standard for SBS HD.[13] SBS had previously down converted its scheduled SBS high-definition content to the 576p standard. On 5 June 2012, SBS upgraded its HD format from 720p to 1080i.[14]

On 1 June 2006, the SBS managing director Shaun Brown announced the corporation's desire to initiate in-show commercial breaks. He claimed that the move would raise $10 million in the first year, as he believes that SBS's current strategy of showing ads between programs "is unpopular with viewers". "On average we lose more than half our audience during these breaks – this is 30 per cent more than other broadcasters", claimed Brown upon announcing the new move.[15]

SBS's commercial breaks remained at their existing statutory limit of five minutes per hour, as opposed to the fifteen minutes per hour permitted on Australia's fully commercial stations. An individual break lasted between one and two minutes. A related change was the launch of a one-hour 6:30 pm edition of World News Australia, replacing the half-hour World News Australia and World Sport programs. In-show advertising commenced on 9 October 2006 during the 7.30 pm broadcast of MythBusters.

In 1995, SBS launched a new division SBS Subscription TV. In October 1995, the first subscription channel to launch was World Movies; the channel focuses on independent international films. In 2010, SBS launched Studio (previously marketed at as STVDIO) the channel focuses on arts programming such as classical and popular music, literature, film, visual arts and dance with documentaries and performances.

SBS Radio broadcasts in 74 languages in all Australian states, producing an estimated 13,500 hours of Australian programming for its two frequencies in Sydney and Melbourne as well as for its national network. Much like SBS TV, SBS radio receives funding from a mix of government grants, paid-for government information campaigns and commercial advertising.[16] SBS Radio broadcast the Euro 2008 in Austria and Switzerland.

Following "extensive community consultation" in 2003, SBS introduced a range of new programs, including services in Malay, Somali, and Amharic – in addition to the expansion of many existing programs.[16]

In April 2013 SBS rolled out a major overhaul of its radio schedule. The last major review of the SBS Radio Schedule had taken place in 1994, and since then Australia's demographics had changed significantly. With the new schedule SBS intends to better reflect Australia's ethnic composition. With the addition of six new languages: Malayalam, Dinka, Hmong, Pashto, Swahili and Tigrinya, SBS has brought the total number of languages from 68 to 74.[17][18]

SBS rolled out a trial of RDS (Radio Data Services) in the Melbourne and Sydney broadcast areas in November 2012. Radio listeners can identify the SBS Radio service by the "SBSRadio" identifier, and if their radio permits, by RDS scrolling text on their FM-capable RDS Radio.

NOW and NEXT data was progressively added to all Radio Services in 2012 and 2013. This now/next data is displayed on FM RDS Radio (Melbourne/Sydney) and DAB+ receptions areas for Radio's that can display metadata.

NOW and NEXT Radio schedule is also displayed on free-to-air Terrestrial Digital Television (DTV) Program Guides, and on TiVo and TBox where applicable.

SBS rolled out the 14-day rolling Radio Schedule over DTV Television in November 2012. A radio event (or program) can be viewed and booked/recorded to PVR or the listener reminded. The schedule adapts to daylight-savings changes as required.

SBS on Demand is a video on demand and Catch up TV service run by the SBS.

SBS has been providing multilingual services since 1975. The SBS in-language units in both Sydney and Melbourne, provide a range of language services for medium to large organisations, private and government businesses, including accredited translations, typesetting, voiceovers/re-narration, subtitling, and video services in over 68 languages.