The most recent Special Olympics World Winter Games were held in Pyeongchang, South Korea from January 29 to February 5, 2013.[2] At the same time, the first Special Olympics Global Development Summit was held on "Ending the Cycle of Poverty and Exclusion for People with Intellectual Disabilities," gathering government officials, activists and business leaders from around the world [3]

Graz and Schladming, Austria will host the next Special Olympics World Winter Games from March 14–25, 2017.[4]

In June 1962, Eunice Kennedy Shriver started a day camp called Camp Shriver for children with intellectual disabilities at her home in Potomac, Maryland.[5] She started this camp because she was concerned about children with intellectual disabilities having nowhere to play and that they could benefit from sports activities. Using Camp Shriver as an example, Eunice Kennedy Shriver, who was head of the Joseph P. Kennedy, Jr. Foundation and part of President John F. Kennedy's Panel on Mental Retardation, promoted the concept of involvement in physical activity and other opportunities for people with intellectual disabilities.[6] Camp Shriver became an annual event, and the Kennedy Foundation (of which Eunice became director in 1957) gave grants to universities, recreation departments and community centers to hold similar camps.

Meanwhile, in 1958, Dr. James N. Oliver of England was conducting pioneering research, including a ground-breaking study showing that physical exercise and activities for children with intellectual disabilities had positive effects that also carried over into the classroom ("The Effects of Physical Conditioning Exercises and Activities on the Mental Characteristics of Educationally Sub-Normal Boys, British Journal of Educational Psychology, XXVIII, June 1958).[7] Dr. Oliver would later (1964) serve as consultant to Camp Shriver, the forerunner to Special Olympics.[8]

The 1964 research of Dr. Frank Hayden, a Canadian physical education professor from London, Ontario, had shown that persons with intellectual disabilities can and should participate in physical exercise. Moreover, he believed that the benefits of such activity would be seen in all areas of the athletes’ lives.[9] And so, with the help of a local school that offered space in its gym, the first organised sport program floor hockey for intellectually disabled individuals became available in the fall of 1968.[10]

It was also in the early 1960s that Eunice Kennedy Shriver wrote an article in the Saturday Evening Post, revealing that her sister—also President John F. Kennedy's sister—was born with intellectual disabilities.[11] This frank article about the President's family was seen as a "watershed" in changing public attitudes toward people with intellectual disabilities. Though Rosemary was born with intellectual disabilities, she had later undergone a lobotomy; the brain damage inflicted by the operation caused her to be permanently incapacitated.[12] It has often been said that Rosemary's disability was Eunice's inspiration to form Special Olympics (as the movement came to be called), but she told The New York Times in 1995 that that was not exactly the case. "The games should not focus on one individual,"she said.[13]

The first International Special Olympics Summer Games were held in 1968 at Soldier Field in Chicago. About 1500 athletes from the U.S. and Canada took part in the one-day event, which was a joint venture by the Kennedy Foundation and the Chicago Park District.[14] Anne McGlone Burke, a physical education teacher with the Chicago Park District and recipient of a Kennedy Foundation grant,[15] began with the idea for a one-time Olympic-style athletic competition for people with special needs. Burke then approached her to fund the event. Eunice, in turn, encouraged her to expand on the idea and the JPK Jr. Foundation provided a grant of $25,000.[citation needed]

In 1971, The U.S. Olympic Committee gave the Special Olympics official approval to use the name “Olympics”.[5]

In 1988, the Special Olympics was officially recognized by the International Olympic Committee (IOC).[5] 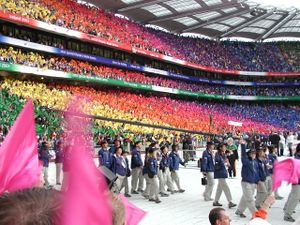 In 2003 the first Special Olympics World Summer Games to be held outside of the United States took place in Dublin, Ireland. Approximately 7,000 athletes from 150 countries competed over 18 disciplines. The Dublin games were also the first to have their own opening and closing ceremonies broadcast live, performed by the President of Ireland, Mary McAleese. Most significantly the 2003 games dramatically changed the perceptions and attitudes of society regarding the abilities and limitations of people with intellectual disabilities. The opening ceremony of the 2003 Games has been described by President McAleese as "a time when Ireland was at its superb best".[17]

In July 2006, the first Special Olympics USA Games were held at Iowa State University. Teams from all 50 states and the District of Columbia participated.[19]

In 2008, Special Olympics and Best Buddies International launched the Spread the Word to End the Word campaign to encourage individuals to stop using the word "retard" in everyday speech.

The Special Olympics logo has gone through several changes in its lifetime. The "stick figure" is an abstract but humanistic form designed to convey the impression of movement and activity. The logo is a symbol of growth, confidence and joy among children and adults with disabilities who are learning coordination, mastering skills, participating in competitions and preparing themselves for richer, more productive lives. The spherical appearance of the logo is a representation of Special Olympics' global outreach.[original research?]

People with intellectual disabilities are encouraged to join Special Olympics for the physical activity, which helps lower the rate of cardiovascular disease and obesity, among other health benefits. Also, they gain many emotional and psychological benefits, including self-confidence, social competence, building greater athletic skills and higher self-esteem.[22] The motivations for joining the Special Olympics vary from one individual to the next; yet, there are common themes among individuals and their families that encourage them to either participate or abstain from the Special Olympics.

Special Olympics competitions are open to athletes ages 8 and up. For young people with intellectual disabilities ages 2–7, Special Olympics has a Young Athletes program—a sport and play program with a focus on fun activities that are important to mental and physical growth.[23] Children engage in games and activities that develop motor skills and hand-eye coordination. Parents say their children in Young Athletes also develop better social skills. The confidence boost makes it easier for them to play and talk with other children on the playground and elsewhere .[23] A study by the Center for Social Development and Education (University of Massachusetts, Boston) found that the activities also had the effect of helping children with intellectual disabilities learn routines and approaches to learning, along with how to follow rules and directions.[24]

Families can also get involved with the Special Olympics experience. Family members support their athletes to the best of their ability, which may involve attending or volunteering at the events. By being involved they can boost their athlete's self-esteem and will be looked at as a constant source of encouragement.[25]

Volunteers and supporters are an integral part of Special Olympics—and millions of people around the world are committed to its programs. Some are sponsors or donors. Many others are coaches, event volunteers and fans.[26]

Coaches help the athletes be the best they can be regardless of ability—or disability. Special Olympics trains coaches through the Coaching Excellence program, which includes partnering with sports organizations. Special Olympics volunteers are introduced to lifetime friendships and great rewards.[26]

There are many events that families and volunteers can get involved with, but the biggest event is the Law Enforcement Torch Run. The Torch Run involves police chiefs, police officers, secret service, FBI agents, military police, sheriffs, state troopers, prison guards, and other law enforcement personnel. They all get together to raise awareness and funds for Special Olympics. Ahead of a Special Olympics competition, law enforcement officers carry the torch in intervals along a planned route covering most of the state or country to the site of the opening ceremonies of the chapter or Special Olympics World Summer or Winter Games. Then they pass the torch to a Special Olympics athlete and together they run up to the cauldron and light it, signifying the beginning of the games.

The Special Olympics athlete's oath, which was first introduced by Eunice Kennedy Shriver at the inaugural Special Olympics international games in Chicago in 1968,[27] is "Let me win. But if I cannot win, let me be brave in the attempt."

Special Olympics has more than 32 Olympic-type individual and team sports that provide meaningful training and competition opportunities for people with intellectual disabilities. A few are listed below:

The above list shows a few of the 32 sports that Special Olympics offers; there are several more recognized and demonstration sports, including Open Water Swimming, Kayaking, Floorball, Cricket, Netball and Beach Volleyball. Availability of sports can depend on location and season.

A key difference between Special Olympics competitions and those of other sports organizations is that athletes of all ability levels are encouraged to participate. Competitions are structured so that athletes compete with other athletes of similar ability in equitable divisions.[28] An athlete's ability is the primary factor in divisioning Special Olympics competitions. The ability of an athlete or team is determined by an entry score from a prior competition or the result of a seeding round or preliminary event at the competition itself. Other factors that are significant in establishing competitive divisions are age and sex.

At competitions, medals are awarded to the first, second and third-place winners in each event and ribbons are awarded to athletes who finish in fourth through eighth place.[29]

In the Young Athletes program, children ages 2–7 play simple sports and games. The focus is on fun activities that are important to mental and physical growth.

In 1968, track and field and swimming were the first two official sports offered by Special Olympics. As in the Olympics, events are introduced in training and then added to the competitive schedule, and from there the list of sports and events continued to grow.

In recent years, Special Olympics has pioneered the concept of Unified Sports, bringing together athletes with and without intellectual disabilities as teammates.[36] The basic concept is that training together and playing together can create a path to friendship and understanding. The program has expanded beyond the U.S. and North America: a half-million people worldwide now take part in Special Olympics Unified Sports, breaking down stereotypes about people with intellectual disabilities.[36]

The Special Olympics Europe Eurasia Regional Research centre is based at the University of Ulster Jordanstown and is jointly led by Professor Roy McConkey and Professor David Hassan.

The Special Olympics health initiative has attracted high-profile partners, including the Hear the World Foundation, which screened more than 1,000 athletes during the most recent World Winter Games in Korea; more than 200 of them were found to have hearing loss.[39][40]

In 2012, the Special Olympics Healthy Communities initiative launched in eight countries—Kazakhstan, Malawi, Malaysia, Mexico, Peru, Romania, South Africa and Thailand, as well as six U.S. states. The goal is to improve the health and well-being of people with intellectual disabilities and allow them to reach their full potential.[21]

The Special Olympics program has occasionally been the subject of criticism. Scholar Keith Storey[41] summarized many such objections in a 2004 article.

There are many other reasons that people object to Special Olympics, such as: perceived promotion of Ableism, the alleged promotion of corporations, and degrading paternalism toward athletic ability.[41] The integration of Corporations within the Special Olympics does help with fundraising and creates a large sum of donations to make these games possible. Yet, critics argue, such corporate involvement in Special Olympics is shallow public relations strategy that does little or nothing to integrate those with intellectual disabilities into the workforce at companies that sponsor Special Olympics. The term Paternalism, in this context, is used to describe posited problems with how the Special Olympics Organization is run. The board of directors have recognized only two of their board to have developmental disabilities. Therefore, the people doing the decision making and have the power of running this program are the people without disabilities. This double-standard, it is argued, reflects poorly on the Disability rights movement where people with disabilities control the service delivery system rather than relying on people without disabilities.[41]