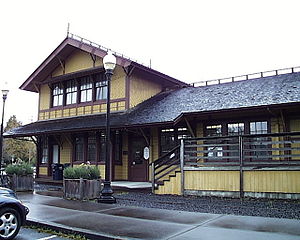 Springfield is a city in Lane County, Oregon, United States. Located in the Southern Willamette Valley, it is within the Eugene-Springfield Metropolitan Statistical Area. Separated from Eugene to the west, mainly by Interstate 5, Springfield is the second-most populous city in the metropolitan area after Eugene. As of the 2010 census, the city has a total population of 59,403.[7]

The Briggs family first settled the Springfield area, arriving in 1848. The community was incorporated as a city in 1885. The city was named after a natural spring located in a field or prairie within the current city boundaries.[8] Traditionally the economy of the community was resource dependent, but since the 1990s the economy has diversified with PeaceHealth now the largest employer in the city. Public education in the city is provided by the Springfield School District.

Springfield was settled when Elias and Mary Briggs and their family arrived in 1848. They were among the first party to travel to the region via the "Southern Route" by Klamath Lake, over the Cascades, into the Rogue Valley, then north to the Willamette Valley.[9] Elias Briggs along with William Stevens ran a ferry on the nearby Willamette River.

According to donation land claim records, Stevens was the first settler to stake a claim in the Springfield locale, arriving in October 1847. He commenced building a house with his three oldest sons, and when the house was completed in December, the rest of his family joined him on Christmas Day that year.

Another early arrival in the Springfield vicinity was Captain Felix Scott, Sr. who settled between the McKenzie and Willamette rivers in 1847.

In 1854 Springfield School District No. 19 was formed. A small schoolhouse was built near the corner of south 7th and B streets; it served the community until the 1880s. Miss Agnes Stewart, a young woman from Pennsylvania, was the first teacher. She had arrived in Springfield via the Lost Wagon Train of 1853.

In 1871 the main line of the Oregon and California Railroad bypassed Springfield for Eugene. The story goes that a group of prominent Eugene businessmen paid railroad financier, Ben Holladay, $40,000 to bypass Springfield by crossing the Willamette River near Harrisburg instead of Springfield. Thus began a rivalry that lasts up to the present day.[citation needed]

Springfield was incorporated as a city in 1885. Albert Walker, a blacksmith in town, was Springfield's first mayor.

In May 1992 the municipality became the first in the United States to include anti-gay legislation in its city charter after a campaign by the Oregon Citizens Alliance.[10] However, the state legislature later passed a law that prevented anti-gay ordinances from being enforced.[11]

For years, the economy of Springfield hinged on the lumber industry, with the largest employer being Weyerhaeuser Company. Weyerhaeuser opened its Springfield complex in 1949, and after years of aggressive logging was forced to downsize as old growth lumber became less available. In the 1990s, the Weyerhaeuser sawmill and veneer (plywood) plants closed, and the paper plant was downsized. Springfield has now developed a more diversified economy.

Ken Kesey's brother Chuck, and Chuck's wife Sue, started the Springfield Creamery in 1960. The business survives today based partly on sales of their flagship product, Nancy's Yogurt, developed from recipes of Nancy Hamren. In the 1970s, the creamery avoided bankruptcy with the help of the rock band Grateful Dead, who over time held a series of 10 benefit concerts on behalf of the creamery. The documentary film Sunshine Daydream was shot at the first performance August 27, 1972.[12][13]

The city of Springfield is surrounded by filbert (hazelnut) orchards. The production has declined over time as fields have been developed into housing. The city used to be sponsor an annual Filbert Festival in early August as a general summer celebration, featuring music, food, and family fun; it was canceled in 2007 due to withdrawal of a key sponsor, and the future for the festival is uncertain. Filbert harvesting occurs in October. 98% of American filbert production is harvested in the Willamette Valley.[14]

According to the City's 2011 Comprehensive Annual Financial Report,[15] the largest employers in the city are:

Springfield has a council–manager form of government. The current mayor of Springfield is Christine Lundberg,[1] and the city manager is Gino Grimaldi.[16] The city council comprises members from 6 wards.[17] The current council members are:[17]

The Springfield Police Department and Springfield Fire and Life Safety are the city's public safety agencies.[18][19] 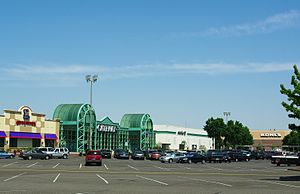 There were 23,665 households of which 33.2% had children under the age of 18 living with them, 40.9% were married couples living together, 15.2% had a female householder with no husband present, 6.2% had a male householder with no wife present, and 37.7% were non-families. 27.9% of all households were made up of individuals and 9.2% had someone living alone who was 65 years of age or older. The average household size was 2.49 and the average family size was 3.00.

Author Ken Kesey moved to Springfield when he was young and graduated from Springfield High School before moving on to the nearby University of Oregon. After some years of wandering (described in The Electric Kool-Aid Acid Test by Tom Wolfe), Kesey bought a farm in nearby Pleasant Hill and remained a prominent local celebrity until his death in 2001.

The Springfield Public Library is located within city hall.[23]

The Richard E. Wildish Community Theater on Main Street in downtown Springfield, a complete renovation of the historic McKenzie Theater, opened in December 2006. The theater seats 284 people and is designed to host music concerts and recitals, dance, drama, festivals and small musicals. The Springfield Renaissance Development Corporation spearheaded the six-year renovation project, completed at a cost of $3.1 million.[citation needed]

There are 15 elementary, 4 middle, and 4 high schools in the Springfield School District, making it one of the largest in the state.[24][25] The largest public high schools, by enrollment, are Thurston High School and Springfield High School. Pioneer Pacific College also has a campus in the Gateway area of Springfield.[26]

The city took third in the voting to choose one of the sixteen possible Springfields in the U.S. to host the premiere of The Simpsons Movie.[27] The show's creator, Oregon resident Matt Groening, sent a plaque to the city of Springfield that stated, in part "Yo to Springfield, Oregon – the real Springfield."[28] In April 2012, Groening confirmed to Smithsonian magazine that he named the fictional Springfield after Springfield, Oregon. He also confirmed that he intentionally left it a secret to allow people the enjoyment of assuming it was based on their own Springfield.[29]

This region experiences warm (but not hot) and dry summers, with no average monthly temperatures above 71.6 °F. According to the Köppen Climate Classification system, Springfield has a warm-summer Mediterranean climate, abbreviated "Csb" on climate maps.[30]