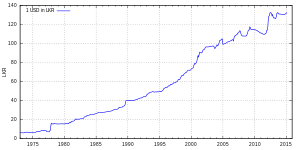 The rupee (Sinhala: රුපියල්, Tamil: ரூபாய்) (signs: රු, Rs; code: LKR) is the currency of Sri Lanka, divided into 100 cents. It is issued by the Central Bank of Sri Lanka and is generally written Rs. (though SLRs. may occasionally be used for disambiguation). Several other currencies are also called rupee.

The British pound became Ceylon's official money of account in 1825, replacing the Ceylonese rixdollar at a rate of 1 pound = 13⅓ rixdollars, and British silver coin was made legal tender. Treasury notes denominated in pounds were issued in 1827, replacing the earlier rixdollar notes. Rixdollar notes not presented for exchange were demonetized in June 1831.

The Indian rupee was made Ceylon's standard coin on 26 September 1836, and Ceylon reverted to the Indian currency area. Pound-denominated treasury notes continued to circulate after 1836, along with the rupee. The legal currency remained British silver and accounts were kept in pounds, shillings and pence. However, payments were made in rupees and annas at the "fictitious par" (fixed accounting rate) of 2 shillings per rupee (i.e., 1 pound = 10 rupees).

The Bank of Ceylon was the first private bank to issue banknotes on the island (1844) and Treasury notes were withdrawn in 1856.

The Indian rupee was formally established as the unlimited legal tender 18 June 1869. The rupee was decimalized 23 August 1871. Thus, the rupee of 100 cents became Ceylon's money of account and sole legal tender effective 1 January 1872, replacing British currency at a rate of 1 rupee = 2 shillings 3 pence.

Between 1940 and 1944, a wholesale change in the coinage was carried out. Production of the ½ cent ceased in 1940, with bronze 1 cent introduced in 1942 with reduced weight and thickness. Nickel-brass replaced cupro-nickel in the 5 cents in the same year and replaced silver in the 25 and 50 cents in 1943. In 1944, nickel-brass, scalloped shaped 2 and 10 cents coins were introduced. The scalloped 10 cents coin replaced the silver 10 cents coin. Later 2 cent coins issued in 1957 were the only coins from this period to ever depict Queen Elizabeth II. Coins with the portrait of King George VI continued to be issued despite his death. In 1957, cupro-nickel 1 rupee coins and .925 silver 5 rupee coins commemorating 2500 years of Buddhism were issued.

In 1963, a new coinage was introduced which omitted the British monarch's portrait, depicting instead The Armorial ensign of Ceylon. Coins issued were aluminium 1 and 2 cents, nickel brass 5 and 10 cents and cupro-nickel 25 and 50 cents and 1 rupee. These coins had the same shapes and sizes of the previous series but were composed of different materials. In 1976, commemorative seven-sided 2 rupee and ten-sided 5 rupee coins were introduced in limited numbers. In 1978, devaluation prompted aluminum to be the replacement of nickel-brass in the 5 and 10 cents, while shortly after 1 and 2 cents were discontinued. Cupro-nickel 2 rupees and aluminium-bronze 5 rupees coins were introduced in 1984 fully replacing the corresponding banknotes. In 1987, commemorative 10 rupees were released which like the 5 cent coin was square with round edges. In 1998 a bimetallic commemorative 10 rupee coin was released. Like earlier forerunner rupee denominations, these were again only issued in limited supply, not intended to replace the corresponding banknotes.

The obverse of the coins issued since 1972 carry the Armorial Ensign of the Republic of Sri Lanka. The reverse of the coin the value in numerals and in Sinhala, Tamil and English below and year of issue at the bottom with SRI LANKA in Sinhala on top. On 14 December 2005, the Sri Lanka central bank issued a new series of coins in the denominations of 25 and 50 cents, 1, 2 and 5 Rupees. The lower denominations of 1, 2, 5 and 10 cents, although legal tender, are not seen in circulation and not in general issued by banks. Furthermore, the minting of these denominations has been discontinued due to associated costs of production and lack of commercial demand.

The observe and reverse designs of the new coins remained identical to the existing circulating coins of the same denominations. However their weights and compositions have been changed to smaller sizes and electroplated steel as opposed to a solid alloy for easier identification purposes and to save on production expense.

The Central Bank of Sri Lanka has issued commemorative coins since 1957.

Commemorative coins issued by the Central Bank of Sri Lanka: 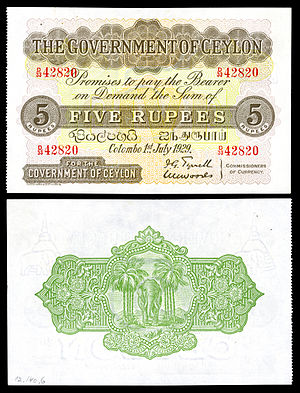 From 1977, banknotes were issued by the Central Bank of Sri Lanka. 20 rupee notes were introduced in 1979, followed by 500 and 1000 rupees in 1981, 200 rupees in 1998 and 2,000 rupees in 2006. Sri Lankan banknotes are unusual in that they are printed vertically on the reverse. In 1998, a 200-rupee note was issued to commemorate the 50th anniversary of independence (1948–1998). This is the first polymer banknote issued in Sri Lanka, and it was printed by Note Printing Australia. All other denominations are printed by the De la Rue Lanka Currency and Securities Print (Pvt) Ltd, a joint venture of the Government of Sri Lanka and De La Rue, a printing company in the United Kingdom.