Services run hourly to Portsmouth & Southsea and Southampton. These are run by Class 450s.[1] Also, there are hourly services between Salisbury and Romsey via Southampton & Eastleigh, run by Class 158s.[2]

The station is at the site of the junction between the London to Weymouth mainline and the West Coastway Line running between Southampton and Portsmouth. It is currently served mainly by South West Trains, with irregular services operated by Southern. There are four platforms; two on the main line and two on the branch line. 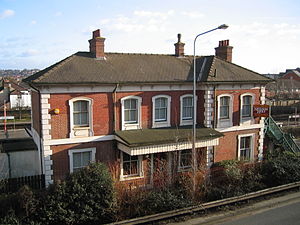 The original station was opened by the London and South Western Railway on 1 May 1861 and named Portswood after the small village to the west of the main line. Shortly after, to accommodate the Portsmouth branch line, a new station building was built 0.25 miles (0.40 km) to the south; the relocated station was opened on 5 March 1866. However to avoid confusion with Portsmouth, the station was renamed to St Denys on 1 January 1876.[3]