Stand in the Schoolhouse Door

The Stand in the Schoolhouse Door took place at Foster Auditorium at the University of Alabama on June 11, 1963. George Wallace, the Democratic Governor of Alabama, in a symbolic attempt to keep his inaugural promise of "segregation now, segregation tomorrow, segregation forever" and stop the desegregation of schools, stood at the door of the auditorium to try to block the entry of two black students, Vivian Malone and James Hood.[1]

The incident brought Wallace into the national spotlight.[2]

On May 17, 1954, the Supreme Court of the United States handed down its decision regarding the case called Brown v. Board of Education of Topeka, Kansas, in which the plaintiffs charged that the education of black children in separate public schools from their white counterparts was unconstitutional. Brown v. Board of Education meant that the University of Alabama had to be desegregated. In the years following, hundreds of African-Americans applied for admission, but with one brief exception,[Note 1] all were denied. The University worked with police to find any disqualifying qualities, or when this failed, intimidated the applicants.[citation needed] But in 1963, three African-Americans —Vivian Malone Jones, Dave McGlathery and James Hood—applied. In early June a federal district judge ordered that they be admitted,[3] and forbade Governor Wallace from interfering.[4] 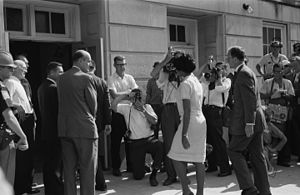 Vivian Malone Jones arrives to register for classes at the University of Alabama's Foster Auditorium.

On June 11, Malone and Hood arrived to register. Wallace, attempting to uphold his promise as well as for political show,[4] blocked the entrance to Foster Auditorium with the media watching. Then, flanked by federal marshals, Deputy Attorney General Nicholas Katzenbach told Wallace to step aside.[1][5] However, Wallace interupted Katzenbach and gave a speech on States' rights.[4][6] Katzenbach called President John F. Kennedy, who federalized the Alabama National Guard. Guard General Henry Graham then commanded Wallace to step aside, saying, "Sir, it is my sad duty to ask you to step aside under the orders of the President of the United States." Wallace then spoke further, but eventually moved, and Malone and Hood registered as students.[7]

The incident was detailed in Robert Drew's 1963 documentary film Crisis: Behind a Presidential Commitment. The event was depicted in the 1994 film Forrest Gump, in which the title character appeared at the event,[8][9][10] and in the 1997 television movie George Wallace.

In June 2012, George Wallace, Jr. mentioned in a talk that the event was referenced in the third verse of Bob Dylan's 1964 song The Times They Are a-Changin' where Dylan sings "Come senators, congressmen, please heed the call. Don’t stand in the doorway, don’t block up the hall." Wallace, Jr. said, when he was 14, he sang the song for his father and thought he saw the look of regret in his father's eye.[11]