It holds the "South Australiana" collection, which documents South Australia from pre-European settlement to the present day. Reference material comes in a wide range of formats from digital and electronic to film, sound recordings, photographic, video and microfiche. Library collections are not for loan and must be used on site. Customers can gain access to a large array of journals, newspapers and other resources from the comfort of their own home by registering for Home Access.

The State Library of South Australia: 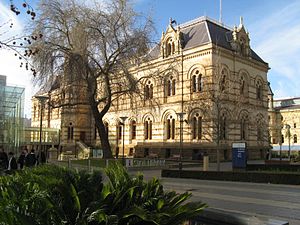 The building now known as the Mortlock Wing was opened on 18 December 1884 as a Public Library, Museum and Art Gallery for the colony of South Australia with 23,000 books and a staff of three.

In 1860 the Library was housed in the Institute Buildings, North-terrace, and construction of the new building took over 18 years to complete after the initial foundations were laid in 1866. (In 1873 the foundations of the western wing of a proposed new block were laid, but there the matter ended until 1876, when fresh plans were drawn, and another set of foundations put in. Again the work went no further until 1879 when the west wing was finally commenced. The earlier work was condemned, and had to be removed before the Public Library could be started.)[1] The foundation stone was laid on 7 November 1879 by Sir William Jervois and the building was constructed by Brown and Thompson at a total cost of £43,897, and opened in 1884. Supervision for the Board of Directors was undertaken by secretary Robert Kay (1825–1904), later general director and secretary of the Public Library, Museum, and Art Gallery of South Australia.

The building is French Renaissance in style with a mansard roof. The walls are constructed of brick with Sydney freestone facings with decorations in the darker shade of Manoora stone.

The interior has two galleries, the first supported by masonry columns, and the second by cast iron brackets. The balconies feature wrought iron balustrading ornamented with gold while the glass-domed roof allows the chamber to be lit with natural light. Two of the original gas "sunburner" lamps survive in the office space located on the second floor at the southern end.

Restoration of the building occurred in 1985 as a Jubilee 150 project by Danvers Architects, consultant architect to the South Australian Department of Housing and Construction. The $1.5 million project was jointly funded by the government and the community.

After the State Library underwent a substantial redevelopment, commencing in 2001 and reaching completion in 2004, the main chamber of the Mortlock Wing became an exhibition space providing a glimpse into the history and culture of South Australia.

In August 2014 the Mortlock Wing featured in a list of the top 20 most beautiful libraries of the world, compiled by the U.S. magazine Travel + Leisure.[3][4]

The general reference and research material in the State Library was named the Bray Reference Library in 1987 after former SA Chief Justice, Dr John Jefferson Bray, who served on the Libraries Board of South Australia from 1944 to 1987. 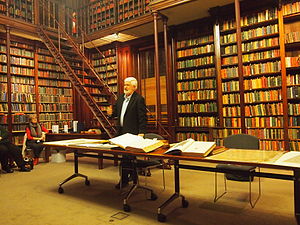 Using items from its rare books collection, Keith Conlon gives a talk on the 200th anniversary of the death of Matthew Flinders, at the SLSA's Institute Building, 21 July 2014.

The State Library's rare books collection is the major collection of its kind in South Australia. It comprises Australian and international items which have been identified as having a special interest through subject matter or rarity.

The Children's Literature Research Collection was formed in 1959 and has over 65,000 books, periodicals, comics, board and table games, and toys. The collection has been enhanced by donations from South Australian individuals and families and from organisations. It is one of the State Library's heritage collections and is of international importance.