State of Slovenes, Croats and Serbs

From Infogalactic: the planetary knowledge core
Jump to: navigation, search
Not to be confused with Kingdom of Serbs, Croats and Slovenes.

The State of Slovenes, Croats and Serbs (Croatian: Država Slovenaca, Hrvata i Srba, Serbian: Држава Словенаца, Хрвата и Срба, pronounced [dřʒaʋa slǒʋeːnaːt͡saː xr̩ʋǎːta i sr̂ba]; Slovene: Država Slovencev, Hrvatov in Srbov Template:IPA-sl) was a short-lived entity formed at the end of World War I by Slovenes, Croats and Serbs residing in what were the southernmost parts of the Austro-Hungarian Empire. It was internationally unrecognized.[1] A month after it was proclaimed, the State joined with Kingdom of Serbia to form the Kingdom of Serbs, Croats and Slovenes.

The Serbs identified in the name were those resident in Bosnia and Herzegovina, Croatia-Slavonia, Syrmia and Dalmatia (including Boka Kotorska and Montenegrin Littoral as far as Spič, near Bar, Montenegro), not those residing in the Kingdom of Serbia (which included the territory of the present-day Republic of Macedonia), nor those living in the Kingdom of Montenegro or Vojvodina (including Banat, Bačka and Baranja).[2][3] 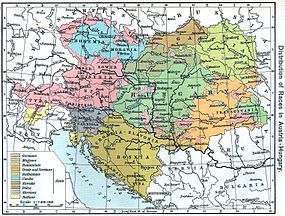 "Distribution of Races in Austria–Hungary" from the Historical Atlas by William R. Shepherd, 1911, indicating those areas inhabited by Slovenes, Croats and Serbs. Most of those territories were included in the State.

In 1918, the final year of World War I, the Austro-Hungarian monarchy was suffering from an internal crisis caused by unrest amongst its numerous Slavic populations.[4] The South Slavic peoples were divided between various subdivisions of the monarchy:

Activities to strengthen pro-Yugoslav forces in the Transleithanian Kingdom of Croatia-Slavonia were initiated by the Yugoslav parliamentary club, a group of South Slavic deputies in the Reichsrat (the Cisleithanian parliament). On 2–3 March 1918,[5] a grass-roots meeting was held in Zagreb that included representatives of various aspects of public life as well as members of several political parties, primarily the Party of Rights led by Mile Starčević and the Slovene People's Party.[6] Significantly, however, the ruling Croat-Serb Coalition and its opposition the Croatian People's Peasant Party were excluded. The meeting produced a joint resolution that proclaimed the unity of the people of Slovenes, Croats and Serbs (a "unified nation" with the latter described as equal "tribes" whose peculiar historical positions and desires are to be accommodated), demanded a right of self-determination and possession of the territory they occupied, including the whole of Cisleithania.[4]

In July and August 1918, the so-called "People's organizations of Slovenes, Croats and Serbs" were formed in Split (for Dalmatia), Sušak (for the Croatian Littoral) and Ljubljana (for the Slovene lands) to advance these policies. In late August, the Croatia-Slavonia parties met again in Zagreb to discuss how to proceed and, in particular, how to gain the support of the Croat-Serb Coalition.[4]

On September 14, 1918, Austro-Hungarian Foreign Minister Burián issued a statement advocating a settlement of World War I by peace treaty and it became apparent that the war was coming to an end. By early October, the Slovene-Croat-Serb movement were planning to set up a National Assembly. Svetozar Pribićević, the leader of the Croat-Serb Coalition, confronted Srđan Budisavljević, one of the leaders of this movement, in an effort to determine whether these plans were meant to undermine the Coalition, and the two reached an understanding whereby the Coalition would be invited to join any future National Council before a National Assembly was formed. At the same time, the organizers obtained support from the Croatian People's Peasant Party and the Serb People's Radical Party. On October 5 and 6, a provisional assembly was convened and the formation of executive committees begun. Seats were apportioned to members of all parties,[6] but not without acrimony over the ad hoc nature of the proceedings.[4]

The National Council or the People's Council (Croatian: Narodno vijeće) was established on 5–8 October 1918 in Zagreb, as an extension of the decisions reached in March 1918. The Council declared itself a political representative body of Slovenes, Croats and Serbs living in Croatia-Slavonia, Fiume, Dalmatia, Bosnia and Herzegovina, Istria, Trieste, Carniola, Görz, Styria, Carinthia, Bačka, Banat, Baranya, Međimurje and elsewhere in southwest Hungary. The Council established its own Central Committee and Presidency, while one member of the Council was to be representative of a 100,000 people. In addition, it comprised five representatives of Croatian Sabor, the Diet of Bosnia and Reichsrat for a total of 95 representatives. 32 voting members were required to form the quorum, and two-thirds majority was needed for any decisions. Members of regional parliaments were allowed to attend as non-voting observers. The Council elected up to 30 Central Committee members, who could appoint further 10 to the committee by a two-thirds vote.[5]

Numerous meetings were held during October, and on October 16 Emperor Karl made a declaration on the federalization of Cisleithania.[4] On 19 October, the National Council responded by declaring itself the supreme representative body of all South-Slavic peoples in the monarchy, rejecting the declaration, demanding that the peoples represented by the National Council be included in a single state regardless of existing provincial or state borders.[5]

On October 21 and 22, members of the Pure Party of Rights who still advocated for a trialist monarchy secured formal support for a trialist manifesto from Emperor Karl and Prime Minister Sándor Wekerle in Hungary, but the latter was deposed the next day. 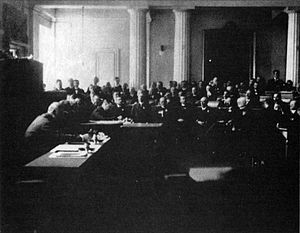 Session of the Croatian parliament, the Sabor, on 29 October 1918. 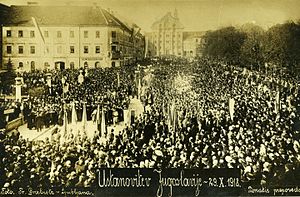 Proclamation of the State of Slovenes, Croats and Serbs in Congress Square, Ljubljana, 29 October 1918.

On October 28, Gyula Andrássy the Younger sent a peace note to the American government while the Ban of Croatia, Antun Mihalović, reported to the Emperor and was dismissed with the instruction "Do as you please".[4] The Ministry of War had also decided to allow the local military commands to approach the people's councils in order to help maintain law and order. All this was taken as a sign that the Austro-Hungarian monarchy was disintegrating and that the State of the Slovenes, Croats and Serbs was an attainable goal.[4]

The state was proclaimed officially on 29 October 1918. Its first president was a Slovene, Anton Korošec. The two vice presidents were a Serb, Svetozar Pribićević, and a Croat, Ante Pavelić.[5]

The new state aspired to include all those territories of the former Austria-Hungary that were inhabited by Slovenes, Croats and Serbs. Those representing the Serbs in Vojvodina, however – including those in Banat, Bačka and Baranja – objected and formed their own administration under the supreme authority of the Serbian National Board in Novi Sad. Vojvodina then joined the Kingdom of Serbia on 25 November 1918. One day earlier, on 24 November 1918, the region of Syrmia, which had become part of the State of Slovenes, Croats and Serbs, seceded and also joined the Kingdom of Serbia.[2][3]

Austria-Hungary reached an armistice with Italy through the Armistice of Villa Giusti signed on November 3, 1918. This agreement stipulated that Italy could occupy large parts of the territory that had been included in the State of Slovenes, Croats and Serbs. Italian troops then occupied Istria and much of Dalmatia and remained there until 1921, when the Treaty of Rapallo came into effect. 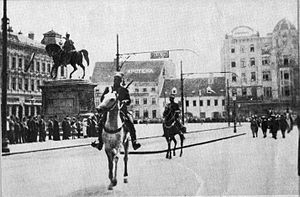 On 23–24 November, the National Council declared "unification of the State of Slovenes, Croats and Serbs formed on the entire, contiguous South-Slavic area of the former Austria-Hungary with the Kingdom of Serbia and Montenegro into a unified State of Slovenes, Croats and Serbs". 28 members of the council were appointed to implement that decision based on National Council's adopted directions on implementation of the agreement of organization of the unified state with the government of the Kingdom of Serbia and representatives of political parties in Serbia and Montenegro. The instructions were largely ignored by the delegation members who negotiated with Regent Alexander instead.[5]

Stjepan Radić's Peasant Party participated in the National Council, but after it decided to merge with Serbia, they started to back off, calling the move foolish, and disputing the decision based on the fact that the Croatian Parliament never explicitly approved it.[7]

On 1 December, Regent Alexander proclaimed unification of "Serbia with lands of the independent State of Slovenes, Croats and Serbs into a unified Kingdom of Serbs, Croats, and Slovenes". As the National Council ceased to operate, it never formally ratified the proclamation, nor did the Parliament of Serbia, which took note of the declaration on 29 December 1918.[5]

The National Council's final important task was to appoint representatives to the Temporary National Representation in early 1919.[8]