Stephen Arthur Frears (born 20 June 1941) is an English film director. Frears has directed British films since the 1980s including My Beautiful Laundrette, Dangerous Liaisons, High Fidelity, The Queen and Philomena.

Frears was born in Leicester, England. His father, Russell E. Frears, was a general practitioner and accountant, and his mother, Ruth M. (née Danziger), was a social worker.[1] Frears was brought up Anglican, and did not find out that his mother was Jewish until he was in his late 20s.[2][3][4] Frears was educated at Gresham's School from 1954 to 1959, and later went on to study law at Trinity College, Cambridge, from 1960 to 1963.

After graduating from Cambridge, Frears worked as an assistant director on the films Morgan! and if..... He spent most of his early directing career in television mainly for the BBC, but also for the commercial sector. Frears contributed to several high-profile anthology series such as the BBC's Play for Today, and produced a series of Alan Bennett's plays for LWT, taking responsibility for working in the gallery on The Old Crowd while Lindsay Anderson worked with the actors. 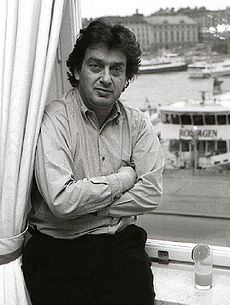 In the late 1980s, Frears came to international attention as a director of feature films. His directorial film debut was the detective spoof Gumshoe (1971), but it was his direction of My Beautiful Laundrette that unexpectedly led to wider notice. The interracial romance, based on a Hanif Kureishi screenplay and shot on 16 mm film, was released theatrically in 1985 to great acclaim, and received an Academy Award nomination and two nominations for BAFTA Awards: it is known as the film that helped launch both Frears and actor Daniel Day Lewis. In 1987, Frears worked with Adrian Edmondson on Mr Jolly Lives Next Door, for a 45-minute programme by cult ensemble The Comic Strip Presents. In 1985, Frears also directed a Comic Strip parody of Rebecca.

Frears next directed Joe Orton biopic Prick Up Your Ears, another collaboration with playwright Alan Bennett, which was followed by his second film from a Kureishi screenplay, Sammy and Rosie Get Laid (1987). The following year, Frears made Dangerous Liaisons in France, with a cast that included Glenn Close, John Malkovich and Michelle Pfeiffer. Based on the novel of romantic game playing, the film received numerous Academy Awards and BAFTA nominations, and Frears himself was nominated for the BAFTA Award for Best Direction. Frears had further critical success with his next film The Grifters, another tale of con-artists. The film earned Frears his first Academy Award nomination for best direction. In 2006, Frears directed The Queen, that depicts the death of Princess Diana on 31 August 1997. The Queen also achieved immense critical acclaim, box-office success, and awards. Frears himself received his second Academy Award nomination for best direction, and Helen Mirren won numerous awards for playing the title role.

Frears' other films include Western The Hi-Lo Country (1998), which won him the best director award at the Berlin Film Festival, High Fidelity (2000), which features a number of scenes where star John Cusack addresses the audience directly, Dirty Pretty Things (2002), and British theatre comedy Mrs Henderson Presents (2005). Frears returned to directing for television with The Deal (2003), which depicts an alleged deal between Tony Blair and Gordon Brown over which of them should become leader of the Labour Party in 1994.

He holds the "David Lean Chair in Fiction Direction" from the National Film and Television School in Beaconsfield, where he teaches.

His 1992 film Hero, starring Dustin Hoffman, was a major box-office disappointment. Frears was nominated for a Razzie Award for his direction of Mary Reilly.

His 2013 adoption drama Philomena, written by Jeff Pope and Steve Coogan, won the best screenplay award at the 2013 Venice Film Festival and the BAFTAS, and was nominated that year for Best Picture at the BAFTAs and the Academy Awards. It stars Coogan and Judi Dench.

Frears currently lives in London with his wife, the painter Anne Rothenstein, and their two children. He also has two children from his previous marriage to Mary-Kay Wilmers. Early in his career, Frears made a programme featuring the band the Scaffold and is name-checked ("Mr Frears had sticky out ears...") in their hit song "Lily the Pink".[5]

He was one of several celebrities who endorsed the parliamentary candidacy of the Green Party's Caroline Lucas at the 2015 general election.[6] 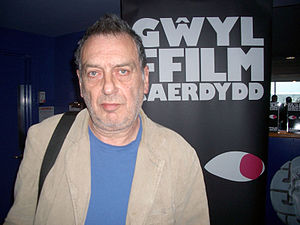 Frears at the Cardiff Film Festival in 2006 for the premiere of The Queen.