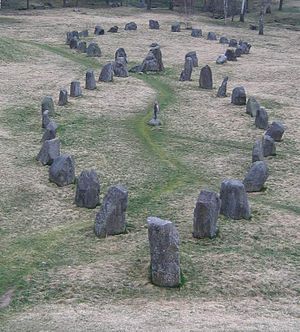 The stone ships at Anund's barrow

The stone ship or ship setting was an early burial custom, characteristically Scandinavian but also found in Northern Germany and the Baltic states. The grave or cremation burial is surrounded by tightly or loosely fit slabs or stones in the outline of a ship. They are often found in grave fields, but are sometimes far from any other archaeological remains.

Ship settings are of varying sizes, some of monumental proportions. The largest known is the mostly destroyed Jelling stone ship in Denmark, which was at least 170 metres long. In Sweden, the size varies from 67 metres (Ale's Stones) to only a few metres. The orientation also varies. Inside, they can be cobbled or filled with stones, or have raised stones in the positions of masts. The illusion of being ships has often been reinforced by larger stones at the ends. Some have an oblique stern.

Scattered examples are found in Northern Germany and along the coast of the Baltic States. Excavations have shown that they are usually from the latter part of the Nordic Bronze Age, c. 1000 BC – 500 BC (e.g. Gotland) or from the Germanic Iron Age, the Vendel Age and the Viking Age (e.g. Blekinge and Scania).

Scholars have suggested both that the stone ship developed out of the desire to equip the dead with everything he had in life, and alternatively that it was specifically associated with the journey to Hel.[1] One puzzling feature is that they sometimes occur at the base of a barrow, enclosing a flat area presumably intended for public ceremonies.[2]