A streetcar suburb is a residential community whose growth and development was strongly shaped by the use of streetcar lines as a primary means of transportation. Early suburbs were served by horsecars, but by the late 19th century cable cars and electric streetcars, or trams, were used, allowing residences to be built further away from the urban core of a city. Streetcar suburbs, usually called additions or extensions at the time, were the forerunner of today's suburbs in the United States and Canada.

Although most closely associated with the electric streetcar, the term can be used for any suburb originally built with streetcar-based transit in mind, thus some streetcar suburbs date from the early 19th century. As such, the term is general and one development called a streetcar suburb may vary greatly from others. However, some concepts are generally present in streetcar suburbs, such as straight (often gridiron) street plans and relatively narrow lots.

File:Largewalnut071203.jpg
Advertisement for a subdivision in Cincinnati, Ohio touting the short walk to nearby rail stations

By 1830, many New York City area commuters were going to work in Manhattan from what is now the boroughs of Brooklyn and Queens, which were not part of New York City at that time. They commuted by ferries. In 1852, architect Alexander Jackson Davis designed Llewellyn Park in New Jersey, a planned suburb served by both ferry[citation needed] and steam railroad. In the 1840s and 1850s, new railroad lines fostered the development of such New York City suburbs as Yonkers, White Plains, and New Rochelle. The steam locomotive in the mid 19th century provided the wealthy with the means to live in bucolic surroundings, to socialize in country clubs[1] and still commute to work downtown. These suburbs were what historian Kenneth T. Jackson called the "railroad suburbs"[2] and historian Robert Fishman called a "bourgeois utopia".[3]

Outside of Philadelphia, suburbs like Radnor, Swarthmore, and Villanova developed along the Pennsylvania Main Line. As early as 1850, 83 commuter stations had been built within a 15-mile radius of Boston.[4] Chicago saw huge developments, with 11 separate lines serving over 100 communities by 1873. A famous community served was Riverside, Illinois, arguably one of the first planned communities in the United States, designed in 1869 by Frederick Law Olmsted.[5]

However, the suburbs closest to the city were based on horsecars and eventually cable cars. First introduced to America around 1830, the horse-drawn omnibus was revolutionary because it was the first mass transit system, offering regularly scheduled stops along a fixed route, allowing passengers to travel three miles sitting down in the time it would take them to walk two miles. Later more efficient horse-drawn streetcars allowed cities to expand to areas even more distant. By 1860, they operated in most major American and Canadian cities, including New York, Baltimore, Philadelphia, Chicago, Cincinnati, Saint Louis, Montreal, and Boston.[6]

Horsecar suburbs emanated from the city center towards the more distant railroad suburbs. For the first time, transportation began to separate social and economic classes in cities, as the working and middle class continued to live in areas closer to the city center, while the rich could afford to live further out.[7]

The introduction of the electrical streetcar in Richmond, Virginia in 1887 by Frank J. Sprague marked the start of a new era of transportation-influenced suburbanization through the birth of the "streetcar suburb". The early trolley allowed people to effortlessly travel in 10 minutes what they could walk in 30, and was rapidly introduced in cities like Boston and Los Angeles, and eventually to all larger American and Canadian cities. There were 5,783 miles of streetcar track serving American cities in 1890; this grew to 22,000 by 1902 and 34,404 by 1907.[8]

By 1890, electric streetcar lines were replacing horse-drawn ones in cities of all sizes, allowing the lines to be extended and fostering a tremendous amount of suburban development. They were often extended out to formerly rural communities, which experienced an initial surge of development, and then new residential corridors were created along the newly built lines leading to what had sometimes been separate communities.[9] On side streets, the houses closest to the original streetcar line are often as much as ten to twenty years older than houses built further down the street, reflecting the initial surge and slow completion of a development.

Because streetcar operators offered low fares and free transfers, commuting was finally affordable to nearly everyone. Combined with the relatively cheap cost of land further from the city, streetcar suburbs were able to attract a broad mix of people from all socioeconomic classes, although they were most popular by far with the middle class.[10]

The houses in a streetcar suburb were generally narrow in width compared to later homes, and Arts and Crafts movement styles like the California Bungalow and American Foursquare were most popular. These houses were typically purchased by catalog and many of the materials arrived by railcar, with some local touches added as the house was assembled. The earliest streetcar suburbs sometimes had more ornate styles, including late Victorian and Stick. The houses of streetcar suburbs, whatever the style, tended to have prominent front porches, while driveways and built-in garages were rare, reflecting the pedestrian-focused nature of the streets when the houses were initially built. Setbacks between houses were not nearly as small as in older neighborhoods (where they were sometimes nonexistent), but houses were still typically built on lots no wider than 30 to 40 feet.

Shops such as groceries, bakeries and drug stores were usually built near the intersection of streetcar lines or directly along more heavily traveled routes (otherwise, routes would simply be lined with houses similar to those found in the surrounding neighborhoods). These shops would sometimes be multi-story buildings, with apartments on the upper floors. These provided convenient shopping for household supplies for the surrounding neighborhoods, that could potentially be visited on one's way to or from work. While there were stores near houses, they were not quite as close as in older parts of cities, and they were usually confined to specific streets, representing the beginning of a complete separation between residential and commercial areas in cities.[11]

Unlike railroad suburbs, which tended to form in pockets around stations along the interurban line, streetcar suburbs formed continuous corridors stretching outwards from city cores. The streetcar lines themselves were either built on roads that conformed to the grid, or on former turnpikes radiating in all directions from the city, sometimes giving such cities a roughly star-like appearance on maps. Along the lines, developers built rectangular "additions" with homes, usually on small lots, within a five- to ten-minute walk of the streetcar. These were essentially built on the grid plan of the older central cities, and typically spread out in between streetcar lines throughout a city.

Streetcar use continued to increase until 1923 when patronage reached 15.7 billion, but it declined in every year after that as automobile use increased amongst the middle and upper classes. By the 1930s, the once-profitable streetcar companies were diversifying by adding motorized buses and trackless trolleys to their fleets.[12] By the 1940s, streetcar ridership had dropped dramatically, and few subdivisions were being built with streetcars or mass transit in general in mind. By the 1950s, nearly all streetcar lines had stopped running, and were instead served by buses.

250px
A Toronto streetcar on Queen Street East in 1923 serving streetcar suburbs such as Riverdale and The Beaches. 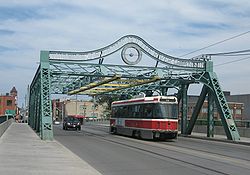 A Toronto streetcar in 2007 serving the same streetcar suburbs.

Now somewhat urban in appearance, former streetcar suburbs are readily recognizable by the neighborhood structure along and near the route. Every few blocks, or along the entire route in well-preserved neighborhoods, there are small commercial structures, storefronts usually flush with the sidewalk; these were small stores—often groceries—operated by "mom and pop" operators who lived in quarters behind or above the establishment. Off-street parking, if it exists at all, is in the rear of the building.

Because stores were originally built along streetcar lines, a person could exit the transport near their home, do some light shopping for dinner items, and continue by walking to their residence. These buildings also provided shopping for a non-employed spouse. Very few small groceries remain (outside of New York City), though the space is often now used for non-foodstuff retail, capable of drawing clients from outside of the immediate neighborhood.

House prices in streetcar suburbs vary by neighborhood and city. Lots left empty in these areas during initial development, or where the initial houses have burned or been torn down, are usually too narrow for modern residential zoning regulations, meaning that it is difficult to infill housing in well-preserved streetcar suburbs. Occasionally two lots are combined into one for a wide enough lot, or many houses are torn down for a new use as needed. However, in some cases where historic zoning applies, infill housing is encouraged or required to match neighboring housing standards.[13]

In a greater sense, the streetcar suburbs of the early 20th century worked well for a variety of reasons.

Some examples of streetcar suburbs in North America

After the streetcars were built in the late 19th century & expanded in the early 20th century many new areas were developed. http://transit.toronto.on.ca/streetcar/4753.shtml One if these was Park-Extension, which was at the end of a railcar road leading directly from downtown along Park Avenue snd ending at a train station. http://m.flickr.com/#/photos/sashamd/7062975697/

Soon after the city's founding in 1856, many different companies provided horse-drawn cars, streetcars and eventually busing throughout the city. Streetcar service stopped on March 4, 1955. Some of the communities served exclusively as streetcar suburbs included:

From the late 1880s to the end of the streetcar era, transit lines spread out of Washington and into the surrounding areas of Montgomery and Prince George's counties in Maryland, heading out to Rockville, Forest Glen, Kensington, Takmoa Park, and Berwyn Heights. In particular, the streetcar helped shape the development of the Gateway Arts District from Mount Rainier through Hyattsville and Riverdale Park and beyond through College Park to Laurel.[24]

Main articles: Trams in Australia and Trams in New Zealand

Kelburn in New Zealand is served by the iconic Wellington Cable Car, and Karori transport once linked to it.

The inner suburbs of many Australian cities were planned around tram lines. Melbourne's existing extensive tram network includes some examples of existing tram suburbs where tram was the dominant form of early transportation and still a major form of transport, including Carlton, Fitzroy, St Kilda, Albert Park, South Melbourne, and Brunswick.

Main articles: Trams in Europe and Trams in Asia

In the Old World, many residential neighborhoods were developed in the early days of industrial urbanization before electric streetcars/trams were invented. However, in much of Europe tram systems eventually came to play a much larger role in public transportation than in most of the New World. Here, therefore, the term "streetcar suburb" is not needed as distinct concept as most neighborhoods in many European cities are tram-oriented, especially in those countries which still had a lower rate of private automobile ownership in the 20th century, such as in the ex-communist East.

An example is the city of Prague, the capital of the Czech Republic. Prague has built many new suburban roads since the fall of communism and also has an extensive metro and bus system, but because its central core is a UNESCO World Heritage Site, the city authorities limit new road construction in historic areas. Instead the tram system is the backbone of the transportation system, with many pre-communist and communist-era neighborhoods featuring brick and plaster walk-up apartment buildings lining roads that are served by several tram routes which run into the centre of the city. This is broadly similar to many mid-sized European cities.