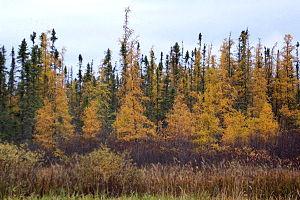 The subarctic is a region in the Northern Hemisphere immediately south of the true Arctic and covering much of Alaska, Canada, Iceland, the north of Scandinavia, Siberia, and the Shetland Islands. Generally, subarctic regions fall between 50°N and 70°N latitude, depending on local climates.

Monthly temperatures are above 10 °C (50 °F) for at least one and at most three months of the year. Precipitation tends to be low due to the low moisture content of the cold air. Precipitation is typically greater in warmer months, with a summer maximum ranging from moderate in North America to extreme in the Russian Far East. Except in the wettest areas glaciers are not large because of the lack of winter precipitation; in the wettest areas, however, glaciers tend to be very abundant and Pleistocene glaciation covered even the lowest elevations. Soils of the subarctic are generally very acidic largely because of the influence of the vegetation both in the taiga and in peaty bogs, which tends to acidify the soil, as well as the extreme ease with which leaching of nutrients takes place even in the most heavily glaciated regions. The dominant soil orders are podsols and further north gelisols.

Subarctic regions are often characterized by taiga forest vegetation, though where winters are relatively mild, as in northern Norway, broadleaf forest may occur—though in some cases soils remain too saturated almost throughout the year to sustain any tree growth and the dominant vegetation is a peaty herbland dominated by grasses and sedges. Typically, there are only a few species of large terrestrial mammals in the subarctic regions, the most important being elk, moose (Alces alces), bears, reindeer (Rangifer tarandus), and wolves (Canis lupus). Agriculture is mainly limited to animal husbandry, though in some areas barley can be grown. Canada and Siberia are very rich in minerals, notably nickel, molybdenum, cobalt, lead, zinc and uranium, whilst the Grand Banks and Sea of Okhotsk are two of the richest fisheries in the world and provide support for many small towns.

Except for those areas adjacent to warm ocean currents, there is almost always continuous permafrost due to the very cold winters. This means that building in most subarctic regions is very difficult and expensive: cities are very few (Murmansk being the largest) and generally small, whilst roads are few. Subarctic rail transport only exists in Europe (lines to Narvik and Murmansk) and the Norilsk–Dudinka line in northern Siberia. An important consequence is that transportation tends to be restricted to "bush" planes, helicopters and, in summer, riverboats.

Except for a few parts of Europe where the winters are relatively mild due to prevailing wind and ocean current patterns, subarctic regions were not explored until the 18th and 19th centuries. Even then, the difficulty of transportation ensured that few settlements (most of them created for mining) lasted long—the ghost towns of the Yukon, Northwest Territories and increasingly Siberia illustrate this.

The Trans-Siberian Railway, which skirts the edge of the region, provided a major boost to Russian settlement in the subarctic, as did the intensive industrialization under Joseph Stalin that relied on the enormous mineral resources of the Central Siberian Plateau. Today, many towns in subarctic Russia are declining precipitously as mines close. In Canada, after the early minerals ran out, development stalled until hydroelectric development occurred in the 1950s and 1960s. Hydro-Quebec in particular has carried out many remarkable engineering works in regions of near-continuous permafrost, but these have never supported a significant population and have mainly served densely populated southern Quebec.

Tourism in recent years has become a major source of revenue for most countries of the subarctic due to the beautiful, generally glacial, landscapes so characteristic of the region. Most areas in the subarctic are among the most expensive places in the world to visit, due to both high costs of living and inaccessibility. Nonetheless, the great opportunities for outdoor recreation lure an ever-increasing number of travelers. At the same time, the older industries of the subarctic (fishing, mining, hydroelectric power) are being threatened by both environmental opposition and overfishing leading to depleted stocks of commercially important species.