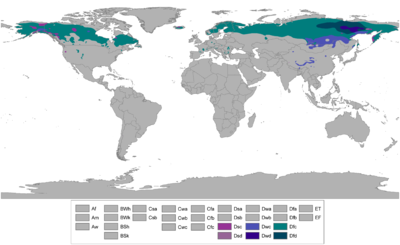 The subarctic climate (also called subpolar climate or boreal climate) is a climate characterised by long, usually very cold winters, and short, cool to mild summers. It is found on large landmasses, away from the moderating effects of an ocean, generally at latitudes from 50° to 70°N poleward of the humid continental climates. These climates represent Köppen climate classification Dfc, Dwc, Dsc, Dfd, Dwd and Dsd. In very small areas at high altitudes around the Mediterranean Basin, Iran, Kyrgyzstan, Tajikistan, Turkey, northwestern United States (Eastern Washington, Eastern Oregon and Idaho) the climate is classified as Dsc with a dry summer climate, such as in Seneca, Oregon.

This type of climate offers some of the most extreme seasonal temperature variations found on the planet: in winter, temperatures can drop to −40 °C (−40 °F) and in summer, the temperature may exceed 30 °C (86 °F). However, the summers are short; no more than three months of the year (but at least one month) must have a 24-hour average temperature of at least 10 °C (50 °F) to fall into this category of climate.

With 5–7 consecutive months where the average temperature is below freezing, all moisture in the soil and subsoil freezes solidly to depths of many feet. Summer warmth is insufficient to thaw more than a few surface feet, so permafrost prevails under most areas not near the southern boundary of this climate zone. Seasonal thaw penetrates from 2 to 14 ft (0.61 to 4.27 m), depending on latitude, aspect, and type of ground.[1] Some northern areas with subarctic climates located near oceans (southern Alaska, the northern fringe of Europe, Sakhalin Oblast and Kamchatka Oblast), have milder winters and no permafrost, and are more suited for farming unless precipitation is excessive. The frost-free season is very short, varying from about 45 to 100 days at most, and a freeze can occur during any month in many areas.

Most subarctic climates have very little precipitation, typically no more than 15 inches (380 mm) over an entire year. Away from the coasts, precipitation occurs mostly in the warmer months, while in coastal areas with subarctic climates the heaviest precipitation is usually during the autumn months when the relative warmth of sea vis-à-vis land is greatest. Low precipitation, by the standards of more temperate regions with longer summers and warmer winters, is typically sufficient in view of the very low evapotranspiration to allow a water-logged terrain in many areas of subarctic climate and to permit snow cover during winter.

A notable exception to this pattern is that subarctic climates occurring at high altitudes in otherwise temperate regions have extremely high precipitation due to orographic lift. Mount Washington, with temperatures typical of a subarctic climate, receives an average rain-equivalent of 101.91 inches (2,588.5 mm) of precipitation per year.[2] Coastal areas of Khabarovsk Krai also have much higher precipitation in summer due to orographic influences (up to 175 millimetres (6.9 in) in July in some areas), whilst the mountainous Kamchatka peninsula and Sakhalin island are even wetter since orographic moisture is not confined to the warmer months and creates large glaciers in Kamchatka. Labrador, in eastern Canada, is similarly wet throughout the year due to the semi-permanent Icelandic Low and can receive up to 1,300 millimetres (51 in) of rainfall equivalent per year, creating a snow cover of up to 1.5 metres (59 in) that does not melt until June.

Vegetation and land use

Vegetation in regions with subarctic climates is generally of low diversity, as only hardy species can survive the long winters and make use of the short summers. Trees are mostly limited to conifers, as few broadleaved trees are able to survive the very low temperatures in winter. This type of forest is also known as taiga, a term which is sometimes applied to the climate found therein as well. Even though the diversity may be low, numbers are high, and the taiga (boreal) forest is the largest forest biome on the planet, with most of the forests located in Russia and Canada. The process by which plants become acclimated to cold temperatures is called hardening.

Agricultural potential is generally poor, due to the natural infertility of soils[citation needed][dubious – discuss] and the prevalence of swamps and lakes left by departing ice sheets, and short growing seasons prohibit all but the hardiest of crops. (Despite the short season, the long summer days at such latitudes do permit some agriculture.) In some areas, ice has scoured rock surfaces bare, entirely stripping off the overburden. Elsewhere rock basins have been formed and stream courses dammed, creating countless lakes.[1]

The Dfc climate, by far the most common subarctic type, is found in the following areas:[3][4]

In parts of Asia, the Siberian High makes the winters so dry (typically with around 5 millimetres (0.20 in) of rainfall equivalent per month) that snow cover is very limited, creating a Dwc climate in:

Further north in Siberia, continentality increases so much that winters can be exceptionally severe, averaging below −38 °C (−36 °F), even though the hottest month still averages more than 10 °C (50 °F). This creates Dfd and Dwd climates.[clarification needed]

The Southern Hemisphere, which has no large landmasses in the upper-middle latitudes that can have both the short but well-defined summers and severe winters that characterize this climate, has very few locations with this climate. One example is parts of the Snowy Mountains in Australia, although they're more alpine than true subarctic.

Should one go poleward or even toward a polar sea, one finds that the warmest month has an average temperature of less than 10 °C (50 °F), and the subarctic climate grades into a tundra climate even less suitable for trees. Equatorward or toward a lower altitude, this climate grades into the humid continental climates with longer summers (and usually less-severe winters); in a few locations close to a temperate sea (as in North Norway and southern Alaska), this climate can grade into a short-summer version of an oceanic climate, the subpolar oceanic climate, as the sea is approached. In China and Mongolia, as one moves southwestwards or towards lower altitudes, temperatures increase but precipitation is so low that the subarctic climate grades into a cold semi-arid climate.