USS Tunny launching a Regulus I in 1958

Four US Navy Ohio-class ballistic missile submarines (SSBN) were converted in the mid-2000s to be able to salvo launch up to 144 Tomahawk cruise missiles from their modified vertical launch submarine-launched ballistic missile (SLBM) tubes, as opposed to launching cruise missiles from torpedo tubes as is done from attack submarines. The advantage that the submarines have over guided missile destroyers and cruisers is the ability to remain undetected and launch while submerged. Tomahawk was deployed on US Navy attack submarines beginning in 1983, originally in LACM and ASCM versions, but the ASCM version was withdrawn in the 1990s.

The US Navy's first land-attack cruise missile submarines (4 SSG and 1 SSGN) deployed with the Regulus missile from 1958 until retired in 1964 with the arrival of the Polaris SSBNs in the Pacific.[1] The US deployed the short-range Harpoon anti-ship missile on submarines beginning in 1981. The Soviet Navy converted 13 Whiskey-class submarines (Project 613) for the LACM role in the late 1950s (Whiskey Single Cylinder, Whiskey Twin Cylinder, Whiskey Long Bin), armed with the SS-N-3 Shaddock (P5) missile. As Soviet SSBNs armed with SLBMs became available in the late 1960s, the Shaddock LACM was withdrawn and an ASCM version replaced it. The Echo- and Juliett-class submarines of the 1960s had a similar armament history, with the Echo I's converted to attack submarines because they could not accommodate an anti-ship guidance radar. The SS-N-3 ASCM was eventually replaced with the SS-N-12 (P-500). Later, the Charlie- and Oscar-classes were designed to use long-range ASCMs, the SS-N-9 (P-120) and SS-N-19 (P-700) respectively. Only the Oscar-class remains in service. In 1990, it was reported that the Soviet Navy had deployed between 50 and 300 SLCMs.[2] The current Akula- and Severodvinsk-class submarines are armed with the SS-N-21 (S-10) LACM.[3]

Jane's Defence Weekly reports that the Dolphin-class submarines are believed to be nuclear armed, offering Israel a sea based second strike capability. In adherence to Missile Technology Control Regime rules the US Clinton administration refused an Israeli request in 2000 to purchase Tomahawk long range SLCMs. The Federation of American Scientists and GlobalSecurity.org report that the four larger torpedo tubes are capable of launching Israeli built nuclear-armed Popeye Turbo cruise missiles[4] 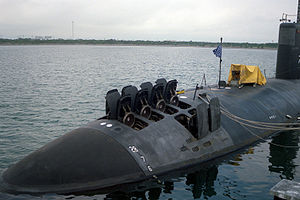 Specific types of SLCMs (LACMs unless noted) include: