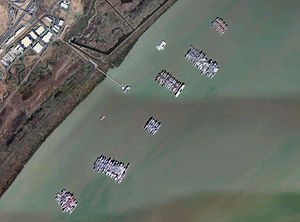 Ships at Suisun Bay, California. Note USS Iowa (BB-61) on the bottom end of the second row from the bottom.

The Suisun Bay Reserve Fleet is located on the northwest side of Suisun Bay (the northern portion of the greater San Francisco Bay estuary). The fleet is within a regulated navigation area that is about 4 1/2 miles long and 1/2 mile wide. It begins just north of the Union Pacific Railroad Bridge and runs northeast, parallel to the shoreline {maps.google.com LINK}. Water depths range from about 14 meters (45 feet) at Mean Lower Low Water (MLLW) at the foot of the anchorage, to about 8 meters (26 feet) MLLW at the shallowest berths towards the northern end of the anchorage.

The U.S. Maritime Administration (MARAD) maintains the National Defense Reserve Fleet, a fleet of vessels that serve as a reserve of ships for national defense and national emergency purposes. The reserve fleet program was begun in 1946 at the end of World War II. At its peak in 1950, the program had more than 2,000 ships in lay-up. One of the reserve fleet storage sites is in Suisun Bay, the northern portion of San Francisco Bay. Only a small portion of vessels currently remain with the Suisun Bay Reserve Fleet. In January 2016, the Department of Transportation and MARAD have officially announced the fleet closure in February 2017. All remaining ships will be sold at auction or scrapped.

The State of California and several environmental groups have raised concerns about the environmental impacts of the fleet. Potential concerns include heavy metals and anti-fouling agents in the paint that is peeling off of the vessels, as well as PCBs and other hazardous materials that may have been released. Congress responded to these concerns by funding the National Oceanic and Atmospheric Administration (NOAA) to design and implement a study of contaminants in the vicinity of the fleet.

NOAA's DARRP program began work on this project in January 2008. Since then, NOAA's team has assessed existing data from the area to determine data gaps, researched the history and environmental setting of the site, discussed the project with numerous stakeholders, conducted a site visit, and developed and refined a sampling and analysis plan. NOAA deployed bivalve samples in June 2008 and collected sediment and bivalve tissue samples from the area in July 2008. A second field sampling event for additional tissue samples occurred in September. These samples were analyzed and a data report was delivered in early 2009.

Based on these findings, the United States Government has reached an agreement with Arc Ecology, San Francisco BayKeeper, Natural Resources Defense Council, and the California Regional Water Quality Control Board, San Francisco Bay Region (Regional Board) regarding the maintenance and disposal of obsolete ships owned by the U.S. Department of Transportation’s Maritime Administration (MARAD) at the Suisun Bay Reserve Fleet site, resolving a lawsuit in the Eastern District of California. Under the agreement, MARAD will clean, maintain, and dispose of these ships in a manner that eliminates sources of Bay pollution. The Maritime Administration has already begun removing obsolete ships from Suisun Bay for recycling— several ships have left since November 2009. A total of 10 ships remain. 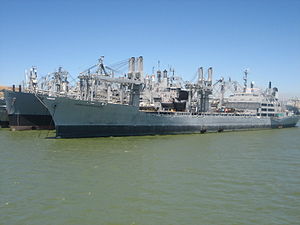