Sullivan's Island is a town and island in Charleston County, South Carolina, United States, at the entrance to Charleston Harbor, with a population of 1,791 at the 2010 census.[3] The town is part of the Charleston metropolitan area.

Sullivan's Island was the point of entry for approximately 40 percent of the 400,000 enslaved Africans brought to British North America; it has been likened to Ellis Island, the 19th-century reception point for immigrants in New York City.[4] During the American Revolution, the island was the site of a major battle at Fort Sullivan on June 28, 1776, since renamed Fort Moultrie in honor of the American commander at the battle.

On September 23, 1989, Hurricane Hugo came ashore near Sullivan's Island; few people were prepared for the destruction that followed in its wake. The eye of the hurricane passed directly over Sullivan's Island. The Ben Sawyer Bridge was a casualty, breaking free of its locks. Before the storm was over, one end of the bridge was in the water and the other was pointing skyward. Sullivan's Island police chief, Jack Lilien, was the last person to leave the island before the bridge gave way. 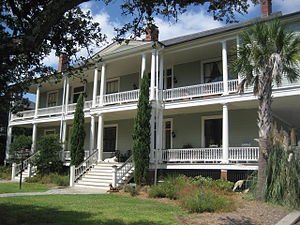 Circa 1900 building on Sullivan's Island, renovated for use as condominiums

The island was known as O'Sullivan's Island,[clarification needed] named for Captain Florence O'Sullivan, who was stationed here as a lighthouse keeper in the late 17th century. O'Sullivan was captain of one of the ships in the first fleet to establish English and Irish settlement at Charleston. In 1671, he became surveyor general. He appears in the earliest record of Irish immigration to the Carolinas, mentioned as being taken on "at Kingsayle (Kinsale) in Ireland".

Sullivan's Island was the disembarkation port for over 40% of the estimated 400,000 slaves transported from Africa to the Britain's North American Colonies, making it the largest slave port in North America. It is estimated that nearly half of all African Americans have ancestors who passed through Sullivan's Island.

"There is no suitable memorial, or plaque, or wreath or wall, or park or skyscraper lobby," writer Toni Morrison said in 1989.[5] "There's no 300-foot tower, there's no small bench by the road."

On July 26, 2008, the Toni Morrison Society dedicated a small bench on Sullivan's Island to the memory of the slave trade; the memorial was privately funded.[6]

Albert Wheeler Todd, an architect from Charleston, designed a town hall for the island.[7]

File:Battle of Sullivans Island.jpg
The Moultrie Flag (also known as the Liberty Flag) being raised over Fort Moultrie, after its successful defense against British invaders

On June 28, 1776, an incomplete fort was held by colonial forces under Colonel William Moultrie against an onslaught by the British under General Sir Henry Clinton's army sailing with Commodore Sir Peter Parker's men-of-war. The British cannon had no effect on the sand-filled palmetto log walls of the fort; only the shots that came over the walls took any lives.

During this battle, a flag designed by Moultrie flew over the fortress; it was dark blue with a crescent moon on it bearing the word "liberty". When this flag was shot down, Sergeant William Jasper reportedly picked it up and held it aloft, rallying the troops until a new standard could be provided. Because of the importance of this pivotal battle that flag became symbolic of liberty in South Carolina, the South, and the nation as a whole.

The Battle of Sullivan's Island was commemorated by the addition of a white palmetto tree to the flag used to rally that day, the Moultrie Flag; this became the basis of the flag of South Carolina. The victory is celebrated and June 28 is known as Carolina Day.

The history of the island has been dominated by Fort Moultrie, which, until its closure in the late 1940s, served as the base of command for the defense of Charleston. After World War II, the Department of Defense concluded that such coastal defense installations were no longer needed given current technology and style of war.

Sullivan's Island is located along the Atlantic Ocean near the center of Charleston County. The town is bordered to the west by the entrance to Charleston Harbor, to the north by the Intracoastal Waterway, and to the east by Breach Inlet and Swinton Creek. The Ben Sawyer Bridge connects Sullivan's Island to Mount Pleasant to the north. A bridge spanning Breach Inlet connects it to Isle of Palms to the east. By road it is 9 miles (14 km) north and then west into Charleston. 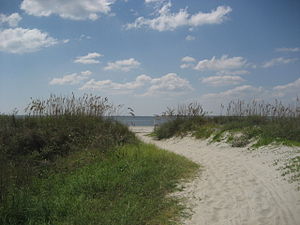 The beach at Sullivan's Island

There were 797 households out of which 29.1% had children under the age of 18 living with them, 50.9% were married couples living together, 7.0% had a female householder with no husband present, and 39.3% were non-families. 29.9% of all households were made up of individuals and 7.0% had someone living alone who was 65 years of age or older. The average household size was 2.40 and the average family size was 3.01.

Sullivan's Island has some of the highest per capita real estate costs in the United States. Although not the most expensive in the region, home values on Sullivan's Island, based on the small size of the island and number of regular residents, makes it one of the priciest locations. 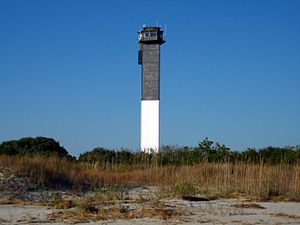 E. Lee Spence, a pioneer underwater archaeologist, was a longtime resident of Sullivan's Island. In the 1960s and 1970s, he discovered many shipwrecks along its shores. Those discoveries included the Civil War blockade runners Flora, Beatrice, Stono, Flamingo, Prince Albert, and the Celt (also known as the Colt).

In 1981, adventure novelist and marine archaeologist Clive Cussler and his organization the National Underwater and Marine Agency discovered the wreck of the blockade runner Raccoon off Sullivan's Island.

For most of its history, the town, located on the southwest half of the island, was known as "Moultrieville". Later, Atlanticville, a community on the north-east of the islands, merged with Moultrieville and together the two became the town of Sullivan's Island.

In 1962, the new Charleston Light was built.

In May 2006, the Town of Sullivan's Island became the first municipality in South Carolina to ban smoking in all public places. The ordinance passed 4-2 and the ban went into effect in June.[12]