The Sultanate of Mogadishu (Somali: Saldanadda Muqdisho, Arabic: سلطنة مقديشو‎‎) (fl. 10th-16th centuries) was a medieval trading empire in Somalia. It rose as one of the pre-eminent powers in the Horn of Africa during the 12th, 13th and 14th centuries, before becoming part of the expanding Ajuran Empire. The Mogadishu Sultanate maintained a vast trading network, dominated the regional gold trade, minted its own Mogadishu currency, and left an extensive architectural legacy in present-day southern Somalia. 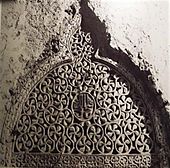 Entrance of a coral stone house in Mogadishu.

According to the Periplus of the Erythraean Sea, maritime trade connected Somalis in the Mogadishu area with other communities along the Indian Ocean coast as early as the 1st century CE, and the ancient trading power of Sarapion has been postulated to be the predecessor of Mogadishu. With Muslim traders from the Arabian Peninsula arriving c. 900, Mogadishu was well-suited to become a regional center for commerce.

The name "Mogadishu" is held to be derived from the Arabic مقعد شاه Maq'ad Shah ("The seat of the Shah"), a reflection of the city's early Persian influence.[1]

For many years, Mogadishu stood as the pre-eminent city in the بلد البربر Bilad al Barbar ("Land of the Berbers"), which was the medieval Arabic term for the Horn of Africa.[2][3][4] Following his visit to the city, the 12th-century Syrian historian Yaqut al-Hamawi wrote that it was inhabited by dark-skinned Berbers, the ancestors of the modern Somalis.[5][6]

The Sultanate of Mogadishu developed with the immigration of Emozeidi Arabs, a community whose earliest presence dates back to the 9th or 10th century.[7] This evolved into the Muzaffar dynasty, a joint Somali-Arab federation of rulers, and Mogadishu became closely linked with the powerful Somali Ajuran Sultanate.[8]

During his travels, Ibn Sa'id al-Maghribi (1213–1286) noted that the city had already become the leading Islamic center in the region.[9] By the time of the Moroccan traveller Ibn Battuta's appearance on the Somali coast in 1331, the city was at the zenith of its prosperity. He described Mogadishu as "an exceedingly large city" with many rich merchants, which was famous for its high quality fabric that it exported to Egypt, among other places.[10][11] Battuta added that the city was ruled by a Somali Sultan, Abu Bakr ibn Sayx 'Umar,[12][13] who was originally from Berbera in northern Somalia and spoke both Somali (referred to by Battuta as Mogadishan, the Benadir dialect of Somali) and Arabic with equal fluency.[13][14] The Sultan also had a retinue of wazirs (ministers), legal experts, commanders, royal eunuchs, and other officials at his beck and call.[13]

Archaeological excavations have recovered many coins from China, Sri Lanka, and Vietnam. The majority of the Chinese coins date to the Song Dynasty, although the Ming Dynasty and Qing Dynasty "are also represented,"[15] according to Richard Pankhurst. 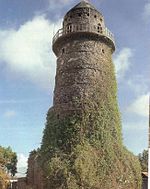 The Almnara Tower in Mogadishu, erected during the reign of the Sultanate of Mogadishu.

In 1416, Mogadishu sent ambassadors to pay tribute to the Ming dynasty. The Yongle Emperor dispatched Admiral Zheng He to return ambassadors to the Somali city, with Zheng He revisiting Mogadishu along with Barawa in 1430 during his fourth trip. He would also return during his fifth, sixth, and seventh voyages in the Indian Ocean.[16][17]

In the Middle Ages, Mogadishu along with other coastal Somali cities in the south came under the Ajuran Sultanate's sphere of influence and experienced another Golden Age. Vasco Da Gama, who passed by Mogadishu in the 15th century, noted that it was a large city with houses of four or five storeys high and big palaces in its centre and many mosques with cylindrical minarets.[18] In the 16th century, Duarte Barbosa noted that many ships from the Kingdom of Cambaya sailed to Mogadishu with cloths and spices for which they in return received gold, wax and ivory. Barbaso also highlighted the abundance of meat, wheat, barley, horses, and fruit on the coastal markets, which generated enormous wealth for the merchants.[19] Mogadishu, the center of a thriving weaving industry known as toob benadir (specialized for the markets in Egypt and Syria)[20] Trading across the Arabian Sea enabled major ports like Mogadishu to prosper during the later Middle Ages. Ross E. Dunn describes Mogadishu and other East African Muslim settlements as "a kind of medieval America, a fertile, well-watered land of economic opportunity and a place of salvation from drought, famine, overpopulation, and war at home."[21]

Somali merchants from Mogadishu established a colony in Mozambique to extract gold from the mines in Sofala.[22]

During the 14th century, Mogadishu established its own Mogadishu currency for its medieval trading empire in the Indian Ocean.[23] It centralized its commercial hegemony by minting coins to facilitate regional trade. The currency bore the names of the 23 successive Sultans of Mogadishu. The oldest pieces date back to 1323-24 and on the front bear the name of Abu Bakr ibn Muhaamad, the then Sultan of Mogadishu.[24] On the back of the coins, the names of the four Caliphs of the Rashidun Caliphate are inscribed.[25] Other coins were also minted in the style of the extant Fatimid and the Ottoman currencies. Mogadishan coins were in widespread circulation. Pieces have been found as far away as modern United Arab Emirates, where a coin bearing the name of a 15th-century Somali Sultan Ali b. Yusuf of Mogadishu was excavated.[23] Bronze pieces belonging to the Sultans of Mogadishu have also been found at Belid near Salalah in Dhofar.[26] The coins continued to be minted until the 18th century.[23]

Upon arrival in Mogadishu's harbour, it was custom for small boats to approach the arriving vessel, and their occupants to offer food and hospitality to the merchants on the ship. If a merchant accepted such an offer, then he was obligated to lodge in that person's house and to accept their services as sales agent for whatever business they transacted in Mogadishu.

The various Sultans of Mogadishu are mainly known from the Mogadishan currency on which many of their names are engraved. However, their succession dates and genealogical relations are obscure.[27] While only a handful of the pieces have been precisely dated, the Sultanate's first coins were minted at the beginning of the 14th century, with the last issued around the late 17th century. The following list of the Sultans of Mogadishu is abridged and is primarily derived from these mints.[28] The first of two dates uses the Islamic calendar, with the second using the Julian calendar; single dates are based on the Julian (European) calendar.