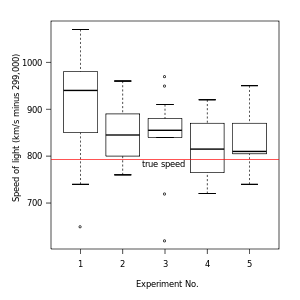 In descriptive statistics, summary statistics are used to summarize a set of observations, in order to communicate the largest amount of information as simply as possible. Statisticians commonly try to describe the observations in

Entries in an analysis of variance table can also be regarded as summary statistics.[1]

Common measures of location, or central tendency, are the arithmetic mean, median, mode, and interquartile mean.

Common measures of statistical dispersion are the standard deviation, variance, range, interquartile range, absolute deviation and the distance standard deviation. Measures that assess spread in comparison to the typical size of data values include the coefficient of variation.

The Gini coefficient was originally developed to measure income inequality and is equivalent to one of the L-moments.

A simple summary of a dataset is sometimes given by quoting particular order statistics as approximations to selected percentiles of a distribution.

Common measures of the shape of a distribution are skewness or kurtosis, while alternatives can be based on L-moments. A different measure is the distance skewness, for which a value of zero implies central symmetry.