Sure, a trading brand of Batelco, is a telecommunications company in the Isle of Man, Jersey, Guernsey, the Falkland Islands, St. Helena, Ascension Island, and the British Indian Ocean Territory. Sure is the largest tri-island mobile operator across the Channel Islands and Isle of Man.

The international division of Cable & Wireless plc bought Guernsey Telecoms from the States of Guernsey in 2002, rebranding as Sure in July 2007. Cable & Wireless opened an office in Jersey in 2004, offering corporate telecoms products. It launched the Sure brand along with mobile services in September 2006. In the same year the company launched fixed line products (FirstDial Home and Business, later re-branded as SureDial Home & Business). In July 2007 Sure launched mobile services in the Isle of Man. In 2008 the company secured a fixed licence and introduced fixed line products (SureDial Home & Business), as well as High Speed Mobile Broadband utilising HSDPA technology. It launched fixed broadband services in the third quarter of 2009.

Sure became part of Cable & Wireless Communications in 2010 following a corporate split of Cable & Wireless plc, and was purchased by Batelco Islands Limited in 2013. The company has the largest market share of mobile, landline and broadband customers in the Bailiwick of Guernsey, which incorporates the islands of Guernsey, Herm, Alderney and Sark. 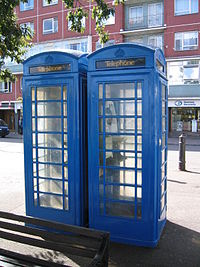 The service was originally founded on 17 June 1896 as the States Telephone Department to “establish, maintain and operate” an independent telephone system for the island which would have a maximum of 400 subscribers. Guernsey, together with Kingston-upon-Hull (see KCOM Group), was outside of the telecommunications monopoly which was created in the British Isles in 1912 by the General Post Office following its purchase of the National Telephone Company Limited.

On 1 October 2001, following a decision by the States of Guernsey to privatise the telecoms industry, operations were transferred from the States of Guernsey Telecommunications Board to a new corporate structure called Guernsey Telecoms Ltd in preparation for privatisation. On 30 May 2002, the company was sold to Cable & Wireless. One of the first changes that islanders noticed was that the telephone kiosks which were previously yellow, were repainted blue.

Four months later on 30 September 2002, the company was rebranded as Cable and Wireless Guernsey, and following the expansion into Jersey and the Isle of Man, it was re-branded as Sure.

Sure launched in the Isle of Man on the 3 June 2007. Throughout the island they offer Mobile and Broadband services to both business and residential clients, their mobile network is wholly owned and operated by themselves, broadband is wholesale purchased from the Island's principal communications company, Manx Telecom. Sure has permission to offer fixed-line telephone services across Manx Telecom's lines.

Sure launched their own 16Mb Broadband service in the Isle of Man on 1 November 2010 and on 1 September 2011 were the first Telecoms company to take pre-orders for VDSL2 (Supplied Wholesale from Manx Telecom) up to 40Mb broadband (2Mb up) which launched on 1 October 2011.

In April 2013, Sure was sold to Batelco. The company then adopted the new Sure International brand for its business services.[1]

Since 2002, Cable & Wireless has invested over £40 million in infrastructure, services and products in the Channel Islands and the Isle of Man. As one of the telecom providers operating in Guernsey, Jersey and the Isle of Man, Sure’s mobile offering has become increasingly competitive. The introduction of mobile number portability in the Channel Islands in December 2008 and in the Isle of Man in 2009 has led to Sure re-launching all of its price plans to compete with the other operators serving the individual islands.

Sure has international roaming agreements with 200 countries across the world. It allows customers to roam across the Channel Islands and Isle of Man without incurring roaming charges.

In 2006 Sure completed the £6.5 million Project HUGO which saw two new fibre optic cables being brought ashore in Guernsey to provide the Channel Island’s future, state of the art telecommunication links. Cable & Wireless’ then chief executive Geoff Houston said Project HUGO marked a new era for telecommunications in the Bailiwick and would put the Channel Islands on a par with some of the world’s major cities.

HUGO directly connects to the Cable & Wireless global infrastructure which is one of the fastest, most reliable and extensive internet protocol networks in the world.

Sure in the community

Sure is an active participant in the communities in the Channel Islands and the Isle of Man and has given hundreds of thousands of pounds in sponsorship and support to individuals, charities and organisations.

In Guernsey, Sure sponsors the Sure Swimarathon which has raised more than £1m. for charities and organisations across the Bailiwick. Sure supports the Tree of Joy which gives underprivileged youngsters in Guernsey a gift at Christmas, works with the Education Department on developing the Guernsey Grid for Learning and raises money for Les Bourgs Hospice through the recycling of mobile handsets. It also until 2009 ran midsummer magic on guernseys beaches. However in 2012 Midsummer Magic returned under and new name Sure Big Screen, films for all ages were shown throughout the week-long event. It looks set for a possible return in 2013

In Jersey, Sure sponsored the Sure Angels at Christmas in 2007 & 2008, who help shoppers in St Helier by providing directions and carrying bags. In 2009 it has sponsored Kyran Bracken’s Skate School, providing skating lessons for islanders with the stars of Kyran Bracken’s Ice Party, a summer show.

In the Isle of Man, Sure was the exclusive telecoms partner in 2007, 2008 and 2009 and sponsor of Sidecar Race A&B for the annual TT races in 2008 and 2009. The company has also supported the Wish Upon A Dream charity, raising money to fulfill the wishes of terminally ill children.