From Infogalactic: the planetary knowledge core
Jump to: navigation, search
This article is about the district. For its eponymous headquarters, see Surendranagar. 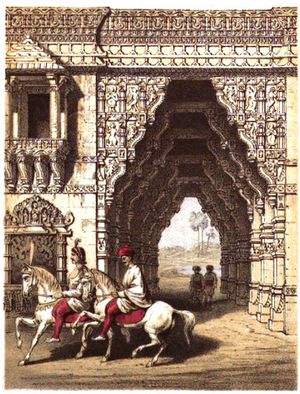 In the past, Surendranagar was used by colonialists as a hill station, as it has a dry environment that was beneficial for some physical as well as mental ailments.[by whom?] Surendranagar's dry air is still believed to be the best place in Gujarat to cure tuberculosis patients.[citation needed]

Surendranagar is a hub of cotton and ginning activities in India, with a large number of ginning and pressing units. It is one of the largest producers of quality Shankar cotton in world. The Surendranagar Cotton Oil and Oilseeds Association Ltd,( Government of India recognised) is a world famous futures trading exchange for cotton. It was established in 1964 and is the first Cotton Future Trading Exchange in India.[citation needed]

Surendranagar City is also home to a big textile and clothing market, specialising in saris. Large clothing showrooms are located in the city on Jawahar Road and Vithal Press Road.

The majority of the population are Jains. Main Jain Temple, which is in the heart of the city, of Sri Vasupujyaswami Bhahvan is more than 100 years old. Other residents include Brahmins, Kshatriya, Patels, as well as significant numbers of Bharvad and Rabari and Kansara .

Raj-Rajeshwari Temple, on National Highway Number 8 near Limbdi, is a large area of residences, hospitals, and schools. The temple features an exhibition of yoga performed by Rishiji. This temple has temples to three major gods—Brahma, Vishnu, and Mahesh—inside. It is the only such temple in Gujarat. The temple is noted for its architecture.

The famous kund known as "Gangavo" is located in Dedadara village. It was developed in the 11th century.

There are many cultural institutions

According to legend, during the siege of Junagadh, Siddhraj Jaisingh fell in love with the queen of Ra'Khenger, Ranakdevi. He attacked Junagadh and killed Ra'Khengar to claim the fort and the queen, but she refused and fled. She escaped from the city towards the river Bhogaavo. After a long chase, she gave up and in true kshtriya fashion, she sacrificed her life by forming sati on the banks of Bhogaavo River, near the city of Wadhwan, instead of becoming the queen of Junagadh, but before she died she cursed that the river would not flow beyond that spot. There is a temple in honour of Ranakdevi on the banks of the river.