As ocean surface waves come closer to shore they break, forming the foamy, bubbly surface called surf. The region of breaking waves defines the surf zone. After breaking in the surf zone, the waves (now reduced in height) continue to move in, and they run up onto the sloping front of the beach, forming an uprush of water called swash. The water then runs back again as backswash. The nearshore zone where wave water comes onto the beach is the surf zone. The water in the surf zone, or breaker zone, is shallow, usually between 5 and 10 m (16 and 33 ft) deep; this causes the waves to be unstable.

The animals that often are found living in the surf zone are crabs, clams, and snails. Surf clams and mole crabs are two species that stand out as inhabitants of the surf zone. Both of these animals are very fast burrowers. The surf clam, also known as the variable coquina, is a filter feeder that uses its gills to filter microalgae, tiny zooplankton, and small particulates out of seawater. The mole crab is a suspension feeder that eats by capturing zooplankton with its antennae. All of these creatures burrow down into the sand to escape from being pulled into the ocean from the tides and waves. They also burrow themselves in the sand to protect themselves from predators. The surf zone is full of nutrients, oxygen, and sunlight which leaves the zone very productive with animal life. 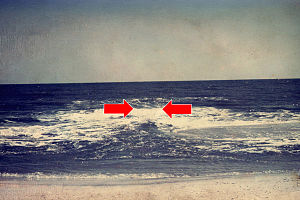 Rip current in the ocean. Rip currents are often very difficult to spot with one's bare eyes, take caution in any body of water

The surf zone can contain dangerous rip currents: strong local currents which flow offshore and pose a threat to swimmers. Rip-current outlooks use the following set of qualifications: